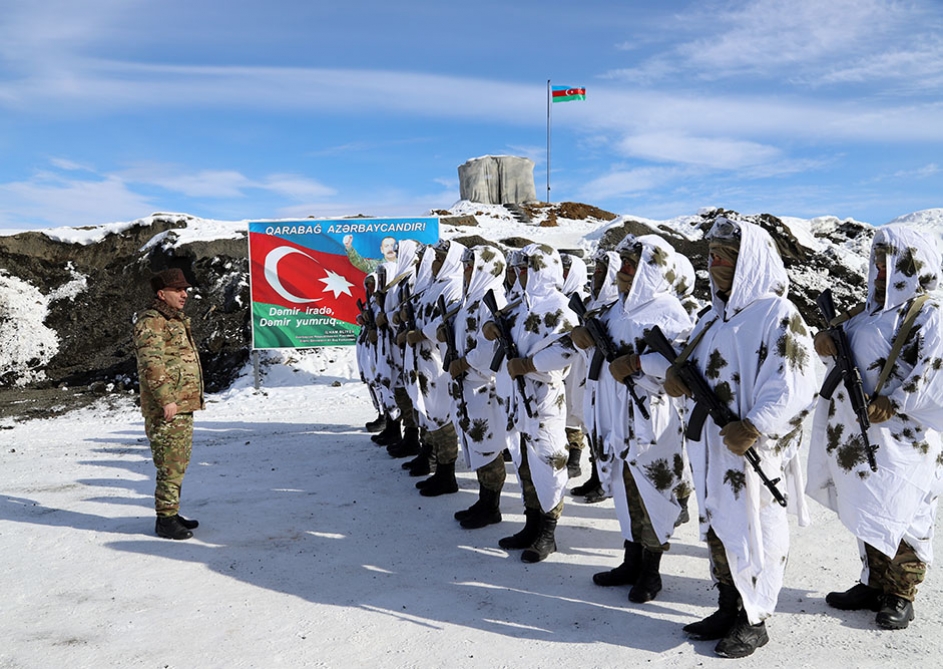 Due to the attention and care of the President of the Republic of Azerbaijan, Supreme Commander-in-Chief of the Armed Forces Ilham Aliyev, activities aimed at improving service, social and living conditions, as well as increasing combat readiness of servicemen serving in the Azerbaijan Army continue, noted the Ministry of Defense, according to Azerbaijan in Focus, reporting AzerTac.

“In accordance with the instruction of the Defense Minister, the Deputy Defense Ministers – the Chief of the Main Department of Logistics, Lieutenant General Nizam Osmanov, and the Commander of the Land Forces, Lieutenant General Anvar Afandiyev, inspected the accommodation points recently built in the territory of Kalbajar district and met with servicemen serving in combat positions.

It was noted that construction work was carried out with high professionalism and all the necessary conditions were created at the accommodation points to organize the troops’ service at a high level.

There are headquarters, canteens fully provided with the necessary kitchen equipment, medical points, soldier barracks, bath and laundry complexes, warehouses for various purposes, a storage park for combat and auto vehicles, as well as other infrastructure facilities.

Accommodation points are provided with electricity, water pipelines, and communication lines, a centralized heating system, as well as generators and solar panels for an uninterrupted power supply.

After familiarization with the living conditions of the military personnel, their combat readiness was checked. The servicemen using special equipment and tanks that provide movement in areas with harsh climatic conditions and difficult terrain successfully fulfilled the assigned tasks.

Then the deputy defense ministers visited several combat positions stationed in Kalbajar and inquired about the service and combat activities of servicemen.

It was reported that the combat spirit and moral-psychological training of the military personnel serving in the liberated territories are at a high level.

Having met with servicemen, the deputy defense ministers highly appreciated their combat training and conveyed to the military personnel the Defense Minister’s congratulations on the upcoming Day of Solidarity of World Azerbaijanis and New Year, as well as presented holiday gifts,” the ministry said.