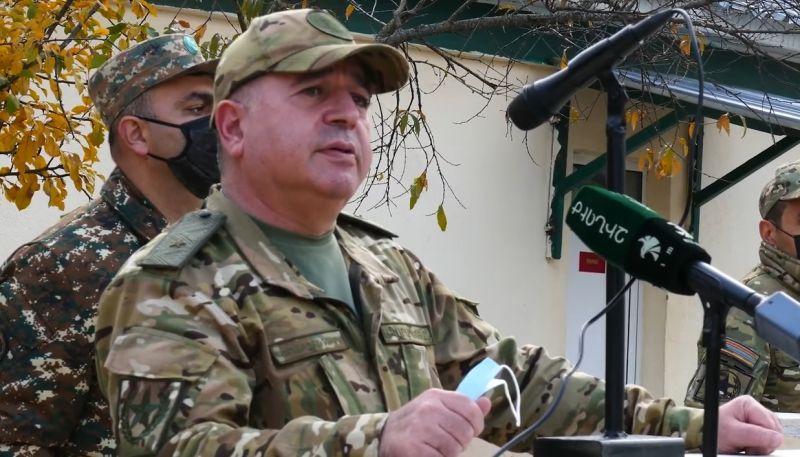 Defense Ministry reminds Karapetyan of the fate of his predecessors

“The Armenian Defense Minister’s unauthorized entry into Azerbaijani territory, meetings with illegal Armenian units, and voicing his views on combat readiness is a military-political provocation,” the Azerbaijani Defense Ministry said in a statement.

This provocative visit of the Armenian Defense Minister was deliberately made on the eve of the anniversary of the trilateral statement signed by the Presidents of the Republic of Azerbaijan, the Russian Federation, and the Armenian Prime Minister on November 10, 2020, the document adds.

Thus, the political and military leadership of Armenia, flagrantly violating provisions of the trilateral statement, is deliberately trying to aggravate the situation in the region and cast a shadow on the activities of the Russian peacekeepers.

Instead of drawing conclusions from its defeat in the 44-day war and adapting to the new geopolitical situation and strengthening peace and security, the Armenian military leadership is resorting to cheap military adventures for domestic consumption.

“This visit of the Armenian Defense Minister demonstrates once again that Yerevan continues to directly support illegal Armenian military units, aggressive separatism, and acts of terror on the territory of Azerbaijan. At the same time, units of the Armenian armed forces continue to stay in the territory of Azerbaijan where the Russian peacekeepers are temporarily deployed,” the statement reads.

The Ministry reminded Karapetyan of the sad fate of his predecessors who made utopian statements of this sort such as creating “Ohanyan’s impassable line,” “new wars – new territories.”

“We warn the military and political leadership of Armenia that in the case where these illegal visits are repeated, necessary measures will be taken to prevent aggressive separatism and acts of terror in keeping with the legislation of the Republic of Azerbaijan,” the Defense Ministry said in a statement.