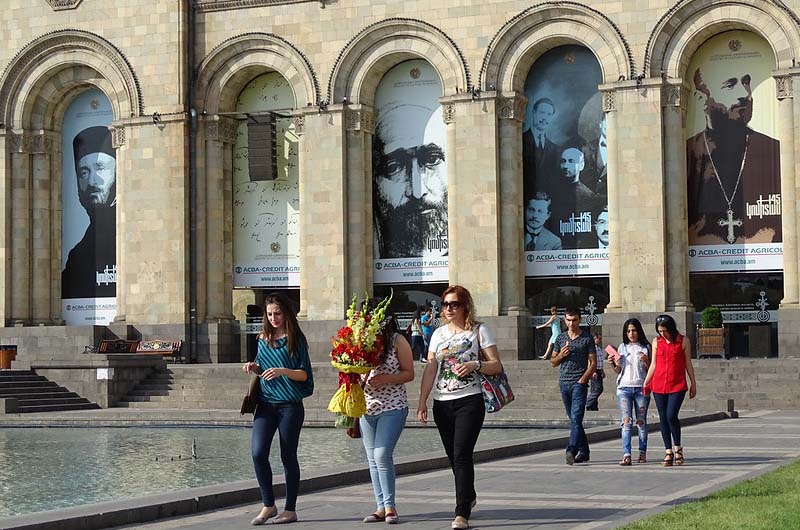 Despite Recent Changes in Armenia, Fascism and Anti-Semitism Remain a Concern

Earlier this month, I reported in Israel Hayom (Why does Western media ignore Jews being compared to rats?) that American journalist Patrick Lancaster had encountered an Armenian man representing a nationalist organization in Republic Square in the capital Yerevan, who was going on an anti-Semitic tirade.

“#Jews are the rats that killed Armenians in 1915″
🇺🇸 journalist Patrick Lancaster, who is on a trip to 🇦🇲, posted a video. It shows a conversation with an Armenian whom Patrick Lancaster met on Republic Square in Yerevan.
We have added subtitles to this video. Enjoy. pic.twitter.com/EborNOd3gO

According to the recording, which was published on social media (see above), the man was saying, “The swastika is the symbol of the Indo-European Aryan people. Hitler killed Jews because they engaged in incitement. They have bloody money. No difference, Jews are very harmful. If rats live in your house, will it be good? Did you know that in 1915 the Armenian genocide was organized by Jews?”

According to a 2014 ADL survey, some 58% of Armenians have anti-Semitic tendencies and prejudices, but 90% of Armenians stated that “the Holocaust did actually happen.” The President of the Jewish Community in Armenia, Rima Varzhapetyan-Feller, said in 2015, that “the Jewish community feels protected in Armenia, and the authorities respect their rights, culture, and traditions. There is no anti-Semitism in Armenia, and we enjoy good relations with the Armenians. Of course, the community has certain problems that originate from the general situation of the country.”

Arye Gut, who heads the Azerbaijan House in Israel and the Israel branch of the Baku Multiculturalism Center, begged to differ in an exclusive interview with the Jewish Press, citing the fact that the recent anti-Semitism report published by Israel’s Ministry of Diaspora Affairs found that there has been a spike in anti-Semitic incidents in Armenia since the Second Karabakh War: “We are talking about an ever-increasing wave of anti-Semitism and nationalism in this mono-ethnic country. The Holocaust Memorial in Yerevan was vandalized several times recently and a memorial in honor of the friendship between Israel and Armenia was also desecrated.”

According to the anti-Semitism report published by Israel’s Ministry of Diaspora Affairs, “The war between Armenia and Azerbaijan in the Nagorno-Karabakh region has led to a worrying rise in the level of antisemitism on the part of the Armenians, which has come amid criticism of political cooperation and security trade between Israel and Azerbaijan. Political criticism was soon replaced by attacks on ethnic-religious backgrounds and accusations against Jews of alleged historical and contemporary crimes against the Armenian people. The war in Nagorno-Karabakh, led, in extreme cases, to the only example from the past year of new anti-Semitism. Reports that Israel supplies weapons to the Azeri army provoked outrage among the Armenian population and in some of the demonstrations held in Armenia, antisemitic slogans were chanted. The Prime Minister of Armenia has accused Israel of supporting the Armenian Genocide.”

Gut claims that “the popularization of fascism, anti-Semitism, and neo-Nazis has become an integral part of Armenia’s state policy,” and says the ethnoreligious teaching of Garegin Nzhdeh (1886-1955), who supported Nazi Germany during WW2, is included in Armenia’s current educational curriculum.

On February 26, 1992, more than 200 and possibly as many as 1,000 ethnic Azerbaijani civilians were murdered by Armenian armed forces and a regiment of the post-Soviet Commonwealth of Independent States in the town of Khojaly in Nagorno-Karabakh. According to Gut, some of the perpetrators of this massacre continued to serve as high-ranking officials of the Republic of Armenia. “Unlike World War II, when the majority of the Nazis were tried at Nuremberg, the ideologues and executors of the mass slaughter in Khojaly live freely in modern Armenia,” he says.

In an exclusive interview with The Jewish Press, Rabbi Zamir Isayev, who heads the Jewish School in Baku, added: “Some try to explain their Nazi ideas by blaming the Jews for the Armenian genocide, which has no connection. When you try to explain this, then you agree with these ideas. When someone thinks that they throw out and kill the Jews, you have the same idea towards other nations too. Anti-Semitism is the problem not only of the Jews but all the world. He probably hates other nations too.”

In December 2015, Armenia held a referendum that approved its transformation from a semi-presidential to a parliamentary republic. The president was stripped of his veto power and the presidency was downgraded to a figurehead position elected by parliament every seven years. The president is not allowed to be a member of any political party and his re-election is forbidden by law. But skeptics viewed that constitutional reform as an attempt on the part of Armenia’s third president, Serzh Sargsyan, to hold on to power by becoming Prime Minister.

Rabbi Isayev believes the Armenian people must stop following Nazism and glorifying past pro-Nazi leaders. “When they stop it, they will be ready for peace,” he stressed. “It depends on the Armenians. Only when Armenia wants peace, they will recognize the territory of other countries, and then there will be peace.”

This article originally appeared in JEWISH PRESS on 14 March 2021.