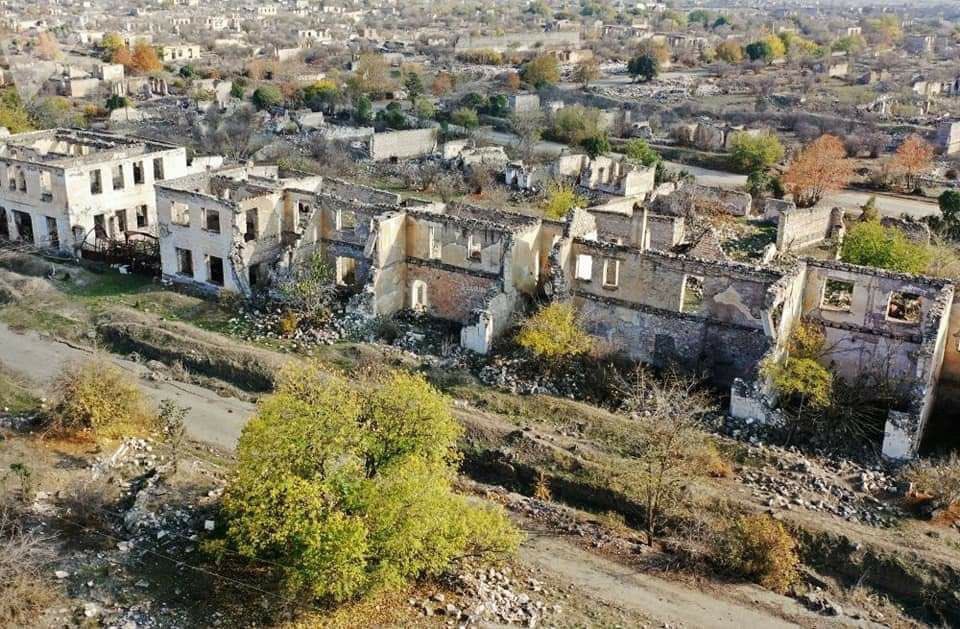 Destruction And Reconstruction Of Nagorno-Karabakh

Recent news coming from Nagorno-Karabakh indicates that there was a widespread destruction in the liberated regions, but that the region is undergoing preparations for a massive reconstruction effort.

Destruction is a natural result of an armed conflict, but in Karabakh additional destruction was caused by vandalism. As a rule, a retreating army unfortunately causes big damage and this is partly due to the psychology of defeat. But the attitude of the Armenian civilians in the Karabakh war was slightly different. When they were retreating from places they illegally occupied for almost three decades, they naturally took anything valuable that belonged to them. There is nothing objectionable in this. But they had no justification to take goods that did not belong to them.

Any act that goes beyond this, is simply looting and the retreating Armenians did exactly this. They took several movable goods, but they also took as many portable parts of the houses that they illegally occupied for years, such as doors, windows and other part of the houses.

However, they did not stop there. They either burned or destroyed the houses that they illegally used for more than two decades.

On the 6 February, Hikmet Hajiyev, assistant to the President of Azerbaijan, accompanied the diplomats posted in Azerbaijan to show them the magnitude of the destruction perpetrated in Zangilan and the Khudaaferin bridge in Jabrail; so they were able to see for themselves the extent of the destruction. On an earlier occasion Hajiyev accompanied the diplomats to Fuzuli and Aghdam where few houses were spared from vandalism.

The withdrawing Armenians wanted to further harm the Azerbaijanis: they planted land mines everywhere they thought may harm the returning Azerbaijanis. Despite all cautions, 14 Azerbaijanis were killed by the land mines, 5 of them were soldiers. In addition, 56 Azerbaijani soldiers and 8 civilians were wounded as a result of land mine explosions. The explosions unfortunately continue to take place.

The Russian de-mining teams are working continuously to de-mine critical places. They are using hand detectors, trained dogs and Uran-6 robots to do the job. Turkish de-mining teams also participate in the efforts.

Every inch of the area has to be checked and the mines cleared. This is a gigantic task. Even years after the peace settles in the area, we may see innocent children killed by undetected mines. This continues to be one of the worst consequences of the military conflicts in the world. Azerbaijani de-mining experts are being trained so that this task could be assumed in the future by them alone.

Fortunately, Azerbaijan has a good experience of rebuilding the destroyed settlements. One such example is the village of Cocuk Merjanli. This village, which is located at the Azerbaijan’s border with Iran, constitutes a living example of Azerbaijani authorities’ approach to the question of reconstruction of the villages. The village was seized in 1993 by the Armenians; almost every single house in it was destroyed. In 2016 Azerbaijan army seized the control of a strategically located hill, Laletepe, which controlled the road leading to the village. Thanks to the seizure of that hill, Azerbaijani army did not let the Armenians enter the village. In eight months between January 2016 to April 2017 the Azerbaijani government reconstructed 50 houses in the village, together with necessary transport infrastructure. Several municipalities from Turkey contributed to the reconstruction activities and installed an apiculture centre to produce honey, a park and several workshops to help resume the economic activities in the village.

The Cocuk Mercanli model served as an example to revive abandoned settlements. Azerbaijani government plans to use this example and repeat the model in many other places where it is applicable.

For the bigger settlements, the government is planning to implement urban development projects with the concept of ‘intelligent cities’. In cities where the buildings are extensively damaged a new approach may be introduced to re-build the settlement from scratch.

We may presume that lesser destruction was caused in the settlements predominantly inhabited by Armenians, because there was no reason to resort to vandalism. The damage was more severe in the Azerbaijani territories occupied by Armenians because of vandalism caused by the Armenians when they were withdrawing from territories that they used to occupy. If a settlement is entirely destroyed beyond reparation, it is easier to build from scratch.

There are evidences that many retreating Armenians took together with them anything that could be useful for them in the new place that they were planning to settle. This is nothing but vandalism. There were other cases where they destroyed buildings, not because they needed the doors or the windows in the new places that they were planning to settle, but simply for the sake of harming the interest of Azerbaijani internally displaced persons who had to flee the Armenian occupation in early 1990s.

The ideal solution would be to pass a new law that will allow the government to build a new settlement from scratch. The construction of buildings, roads, urban facilities is the easiest aspect of it, as Azerbaijan has already a very rich tradition of urban planning. In case of need, it also has means of hiring the best urban planners of the world. It has a very rich tradition of building houses with unique architectural characteristics. In case of need it may open international tenders to do it. These tenders may contain all sorts of conditions to preserve the architectural traditions of Azerbaijan. Everything that contributed to the accumulation of the architectural traditions of Azerbaijan has to be preserved.

Urban planning has also to look to the future. Once a building is erected, it is a waste of resource to dismantle it. Therefore, a good planning is essential before starting to build houses. The settlements have to preserve the traditions of the way that people used to live, but at the same time, it should encourage the people to adapt their life to the future requirements. A few centuries are not a long period in the life of an urban settlement. If a narrow minded approach prevails at the stage of planning, it may not be easy to correct it.

That is why, Azerbaijan approaches the period of planning with great care.

Azerbaijan Prepares For the Post-Karabakh Era

WILL ARMENIA WAKE UP TO THE NEW GEOPOLITICAL REALITY?