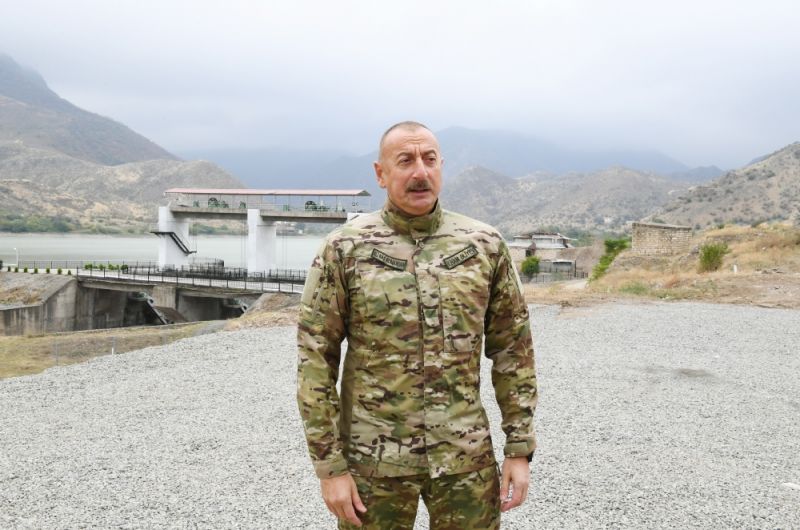 “Azerbaijan pursues an independent policy and builds relations with neighbors on this basis and let no one interfere in our internal affairs,” President Ilham Aliyev made such a statement on Monday in the city of Jebrail.

“With which country and at what level we build relationships – it’s our own business. We do not put forward claims against countries that are close friends with Armenia. This may offend us, especially if it is a neighboring country, but we do not express this, ”Aliyev said.

“We demand respect for our sovereign rights and not interfere in our internal affairs. The accusations against us must be officially proven. Let them come and find a foreigner here,” the head of state said.

Further, the President of Azerbaijan openly accused the Iranian leadership of slander. “We did not pay attention to the slander of some provincial Iranian mullah, but then the officials began to repeat the same, putting forward unfounded accusations against us. Allegedly, Azerbaijan brought Israel to these regions. Let them open their eyes and look. Where did they see Israel here ?! ”, Aliyev stressed.

“Azerbaijan will continue to plan its external relations and internal affairs as it sees fit. Let no one pry their nose into our affairs,” he continued.

Once again hinting at Iran, Aliyev said that some countries remained on the sidelines of the processes in the region. “This is their business, but we have presented a platform for cooperation to all neighboring countries,” he added.

He further said that Azerbaijan has freed 130 km of the border from the Armenian occupation and is checking “what processes took place here.” It was a hint that Iran was illegally trading with the Karabakh separatists, smuggling drugs and weapons. In addition, the Iranians bought the loot from the Armenians in the occupied territories of Azerbaijan.

Further, Aliyev reproached Iran for ignorance of geography. “Let them see where the border is. We consider the places that we have occupied to be the territory of Azerbaijan, and we are doing the right thing.

Today, the leadership of Armenia at the highest level openly declares that Azerbaijan is rightfully located on a certain part of the Goris-Kafan road, as the maps of the Soviet era show. We are on our territory. Now this is being said by Armenia. Others say that we have violated someone’s border, this is ridiculous.”

In conclusion, Aliyev actually made it clear that he does not see Iran as a friendly country. He named Russia and Turkey as such. “These two neighboring countries maintain friendly relations with us and Azerbaijan has the same attitude towards them,” he said.

Such an emotional speech by the head of state was a response to a whole series of anti-Azerbaijani statements by the top political and military leadership of Iran in recent days.

This article originally appeared in TURAN INFORMASIYA AGENTLIYI on 05 Oct 2021.