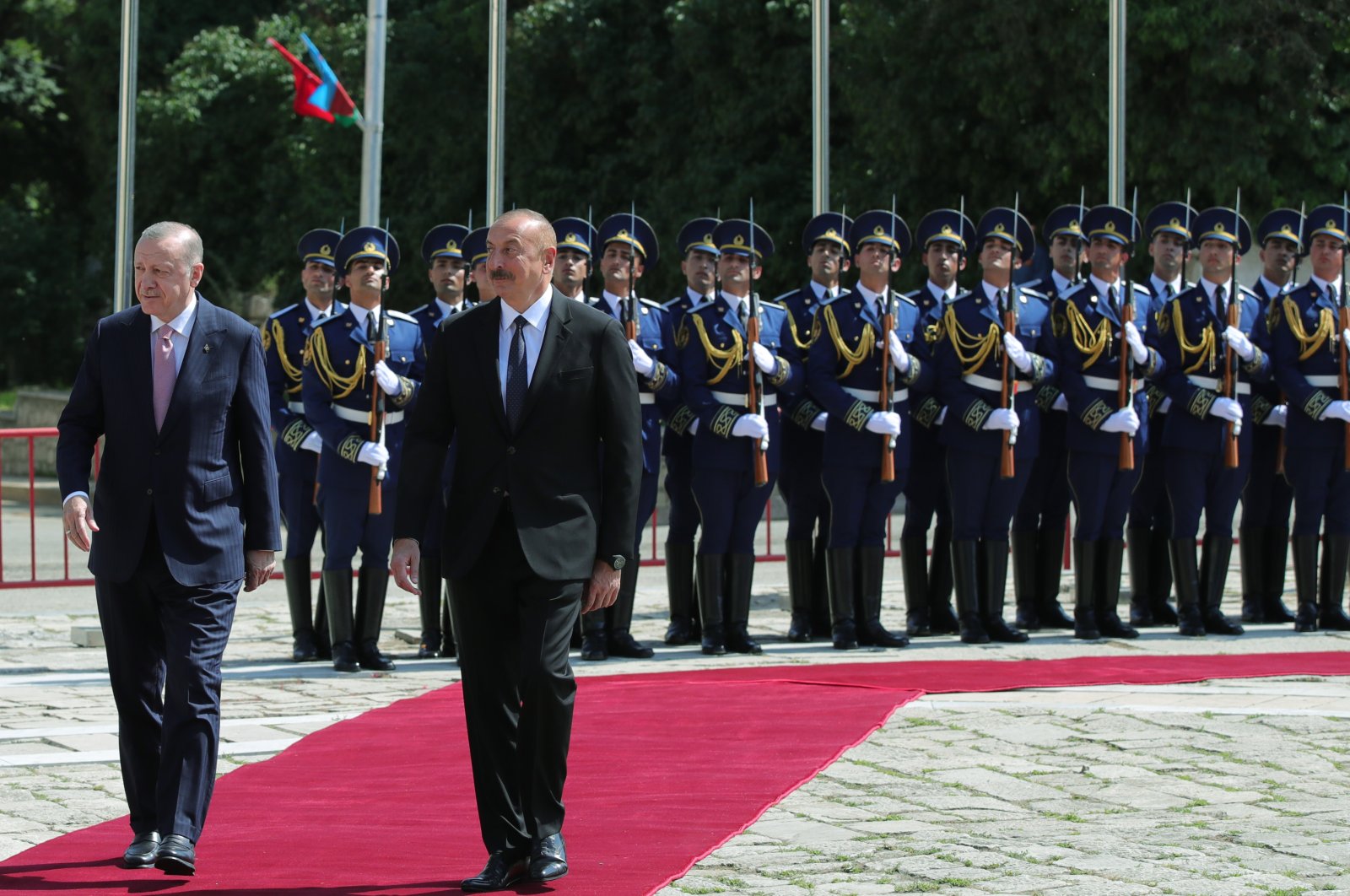 President Recep Tayyip Erdoğan visited the symbolic Karabakh city of Shusha as well as other liberated areas in a show of solidarity and the strong historical ties between the two countries.

Turkey and Azerbaijan signed a memorandum of alliance to carry relations further in several fields during President Recep Tayyip Erdoğan’s historic visit to the symbolic city of Shusha on Tuesday where he was met by his Azerbaijani counterpart Ilham Aliyev.

In a joint press conference, Aliyev said that the memorandum included political and commercial issues while “Our cooperation in the defense industry as well as mutual military aid are especially underlined in this document.”

Aliyev underlined that so far in all issues, Turkey and Azerbaijan have stood together. Turkey’s support during the Nagorno-Karabakh conflict showed the whole world the unity of Ankara and Baku, he added.

Erdoğan for his part said that “Karabakh has returned to its owners” and once again congratulated Azerbaijan for the victory. He also announced that Turkey is planning to “open a Turkish consulate-general in the ancient city of Shusha.”

Erdoğan is the first leader to visit the historic city following its liberation by the Azerbaijani Armed Forces in November last year, after 28 years of Armenian occupation. Shusha, known as the pearl of Nagorno-Karabakh, was occupied by Armenia on May 8, 1992.

The town has significant military value since it is located on strategic high ground about 10 kilometers (6 miles) south of the region’s capital over Khankendi (Stepanakert) and on the road linking the city with Armenian territory. Besides its strategic significance, the town is known as a symbol of Azerbaijani history and culture with many historic sites, the restoration of which has started. Many prominent Azerbaijani musicians and scholars were born in the city.

Aliyev touched upon the damage the city suffered during 28 years of occupation. Despite the occupation, Shusha has not lost its spirit, he stated.

“The document also mentions the opening of a new transport line,” Aliyev added, referring to the Zangezur corridor.

The two leaders traveled to the Azerbaijani city of Shusha in the same car from Nagorno-Karabakh’s Fuzuli. Aliyev briefed Erdoğan about reconstruction in the city on the way.

Upon their arrival in Shusha, Erdoğan was welcomed by an official ceremony.

Erdoğan also reiterated his call to Armenia to join cooperation in the area. “We hope that Armenia will hold the hand of goodwill and solidarity extended to it and make good use of the opportunity to shape the common future together. We now want the region to be a region of peace.”

Fresh clashes erupted between Azerbaijan and Armenia on Sept. 27, and the Armenian Army continued its attacks on civilians and Azerbaijani forces for 44 days, even violating two humanitarian cease-fire agreements. Relations between the ex-Soviet republics have been tense since 1991 when the Armenian military occupied Nagorno-Karabakh, a territory recognized as part of Azerbaijan.

Azerbaijan seized back swathes of its Armenian-occupied territory last year in the conflict that erupted in Nagorno-Karabakh. The conflict claimed 6,000 lives and ended with a Russian-brokered truce in November 2020.

According to the deal, all transportation lines that were closed due to the Karabakh issue will reopen.

Now, work is underway to clear the retaken territories of land mines, repair infrastructure destroyed in the fighting and work on transit routes for the region that have been paralyzed for nearly three decades amid a conflict.

With the opening of new transportation lines, the rebuilding of liberated cities and the restoration of historical monuments, Azerbaijan intends to transform the region into an economic and tourism hub.

Meeting two months after a cease-fire was declared for the Caucasus’ Nagorno-Karabakh region, the leaders of Russia, Azerbaijan and Armenia signed a pact to develop economic ties and infrastructure to benefit the entire region.

While the Karabakh truce has largely held, the border region has witnessed several skirmishes.

During his visit, Erdoğan will also deliver a speech to the Azerbaijani parliament and on Wednesday attend the Euro 2020 football match in Baku between Turkey and Wales.

This article originally appeared in DAILY SABAH on 15 June 2021.