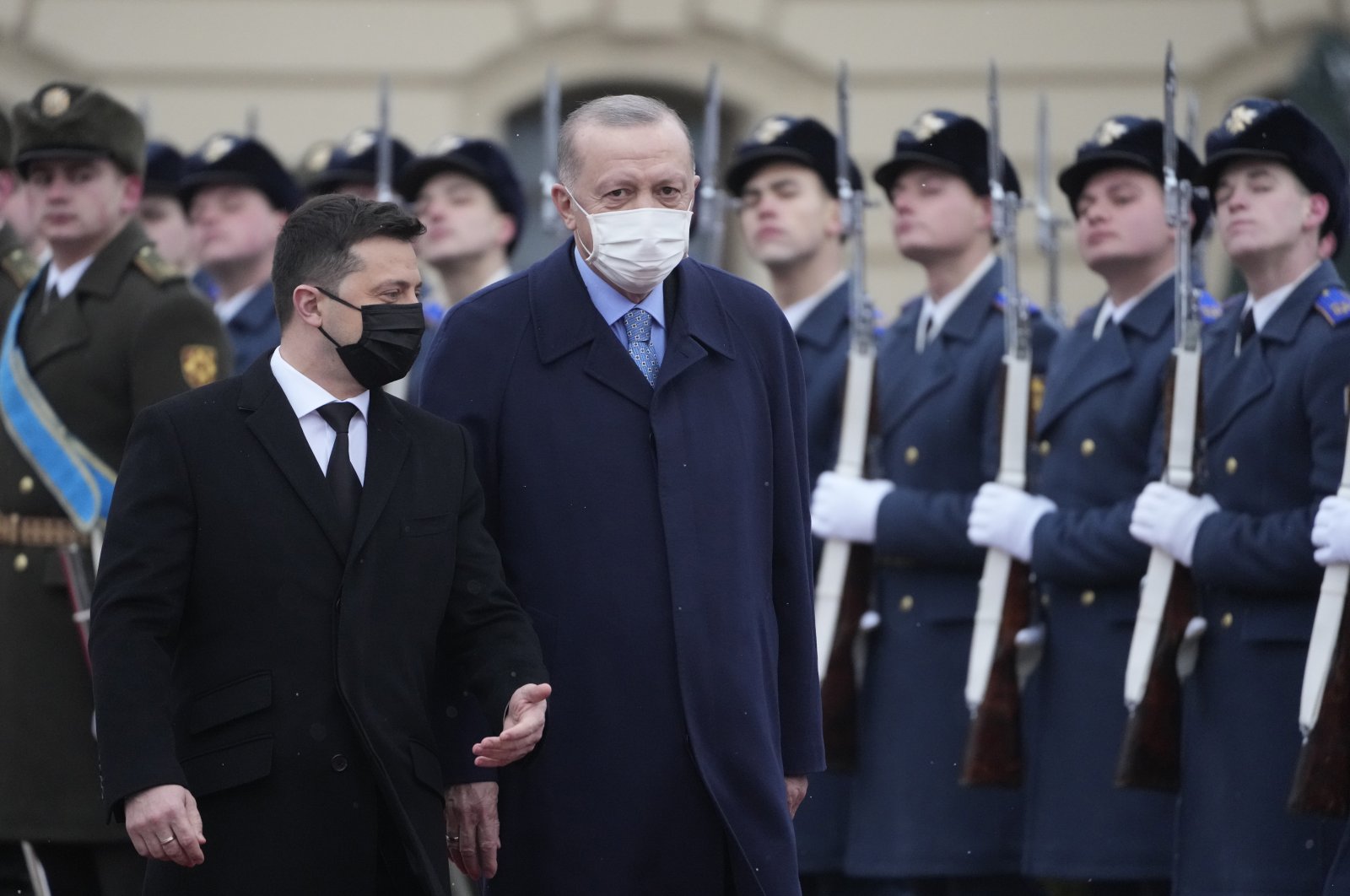 As a country in the Black Sea vicinity, Turkey invites all parties to exercise restraint and use dialogue to bring peace to the region, President Recep Tayyip Erdoğan said Thursday as he arrived in Kyiv to discuss tensions between Ukraine and Russia with his Ukrainian counterpart Volodymyr Zelenskyy after pitching Turkey as a mediator.

Speaking to reporters before leaving for Ukraine, Erdoğan said Turkey was calling on both sides to seek dialogue, adding the crisis must be resolved peacefully on the basis of international law. He reiterated Ankara’s readiness to do its part to establish an atmosphere of peace and trust in the region.

“Today, we will have our meeting with Mr. Zelenskyy. After a visit to China, (Russian President Vladimir) Putin has told us he would travel to Turkey,” he said. “Without holding these two visits, these talks, it would not be right to think about what we can do.”

“God willing we will successfully overcome this problematic period between these two countries,” Erdoğan said, adding that statements from both Ukraine and Russia had so far played down the prospect of a direct military conflict.

The president will hold a one-on-one meeting with Zelenskyy after an official welcoming ceremony at the Mariinsky Palace. Later, Erdoğan is expected to attend the 10th meeting of the two countries’ bilateral High-Level Strategic Council. Following the meeting, Erdoğan and Zelenskyy are expected to sign various agreements and address a joint news conference in Kyiv.

Ukraine and Russia have been locked in conflict since hostilities in the eastern Donbass region broke out in 2014 after Russia illegally annexed the Crimean Peninsula.

Erdoğan’s visit to Turkey’s fellow Black Sea nation comes after visits to Kyiv by leaders of NATO members Britain, Poland, and the Netherlands amid the standoff. Turkey has good ties with Kyiv and Moscow but has said it would do what is necessary as a NATO member if Russia invades.

Russia has denied plans to invade Ukraine amid concern by many Western nations over its buildup of more than 100,000 troops near the border, but has demanded sweeping security guarantees from the West and says it could take unspecified military measures if its demands are not met.

Ankara has previously offered to help defuse the standoff and Turkish diplomatic sources have said both Russia and Ukraine were open to the idea. Turkey has opposed the sanctions threatened by other NATO members in response to a military incursion by Russia.

A Turkish official, speaking on condition of anonymity, told Reuters that Ankara expects tensions to ease after the talks and that Erdoğan will deliver messages that include calling on both sides to exercise restraint.

Turkey’s “approach is not picking one side or standing against one country in the tensions,” the official said, adding that Ankara wanted continued cooperation with both countries.

Turkey shares the Black Sea with Ukraine and Russia. Erdoğan has said the conflict would be unacceptable in the region and warned Russia that an invasion would be unwise.

While forging cooperation on defense and energy, Turkey has opposed Moscow’s policies in Syria and Libya, as well as its annexation of the Crimean Peninsula in 2014. It has also sold sophisticated drones to Ukraine, angering Russia.

Ukrainian Defense Minister Oleksii Reznikov told a briefing ahead of Erdoğan’s visit that Turkey and Ukraine will press ahead with a plan to build drones in Ukraine. The two countries will also sign a free trade agreement, along with several more deals.

Ukraine is happy to shift the venue of peace talks in eastern Ukraine to Istanbul or other Turkish cities following a suggestion by Erdoğan, but Russia has to agree, Reznikov also said.

Cease-fire talks to end the conflict in eastern Ukraine have mainly been held in the Belarusian capital of Minsk, but Belarus has forged closer ties to Russia as tensions between Kyiv and Moscow grew in recent months.

Reznikov also said the number of cease-fire violations in the conflict in eastern Ukraine had decreased and there had been no combat losses for the past three weeks. He said Russia had currently massed 115,000 troops near Ukraine’s borders.

Erdoğan also noted that this visit would be especially significant as Turkey and Ukraine mark their 30th year of diplomatic relations on Thursday.

“We’ll discuss all aspects of our bilateral relations during our meetings. We’ll also exchange views on important regional and international issues on our common agenda,” said Erdoğan.

Serious progress has been made in bilateral relations with Ukraine in recent years, especially in the fields of trade, investment, tourism, and the defense industry, said Erdoğan.

Despite the coronavirus pandemic, Turkey hosted more than 2 million Ukrainian visitors last year, he said and added that the two countries’ bilateral trade volume last year increased by nearly 60% compared to 2020, reaching $7.5 billion. Erdoğan said Turkey is taking firm steps towards its target of raising the trade volume to $10 billion.

The president also said he would pay special attention to the situation of the Crimean Tatars, which is one of the main elements of bilateral relations with Ukraine and will be at the top of the agenda during meetings in the Ukrainian capital Kyiv.

“I believe our talks in Kyiv will contribute significantly to the strengthening of bilateral relations with Ukraine,” said Erdoğan.

This report originally appeared in Daily Sabah on 3 February 2022.