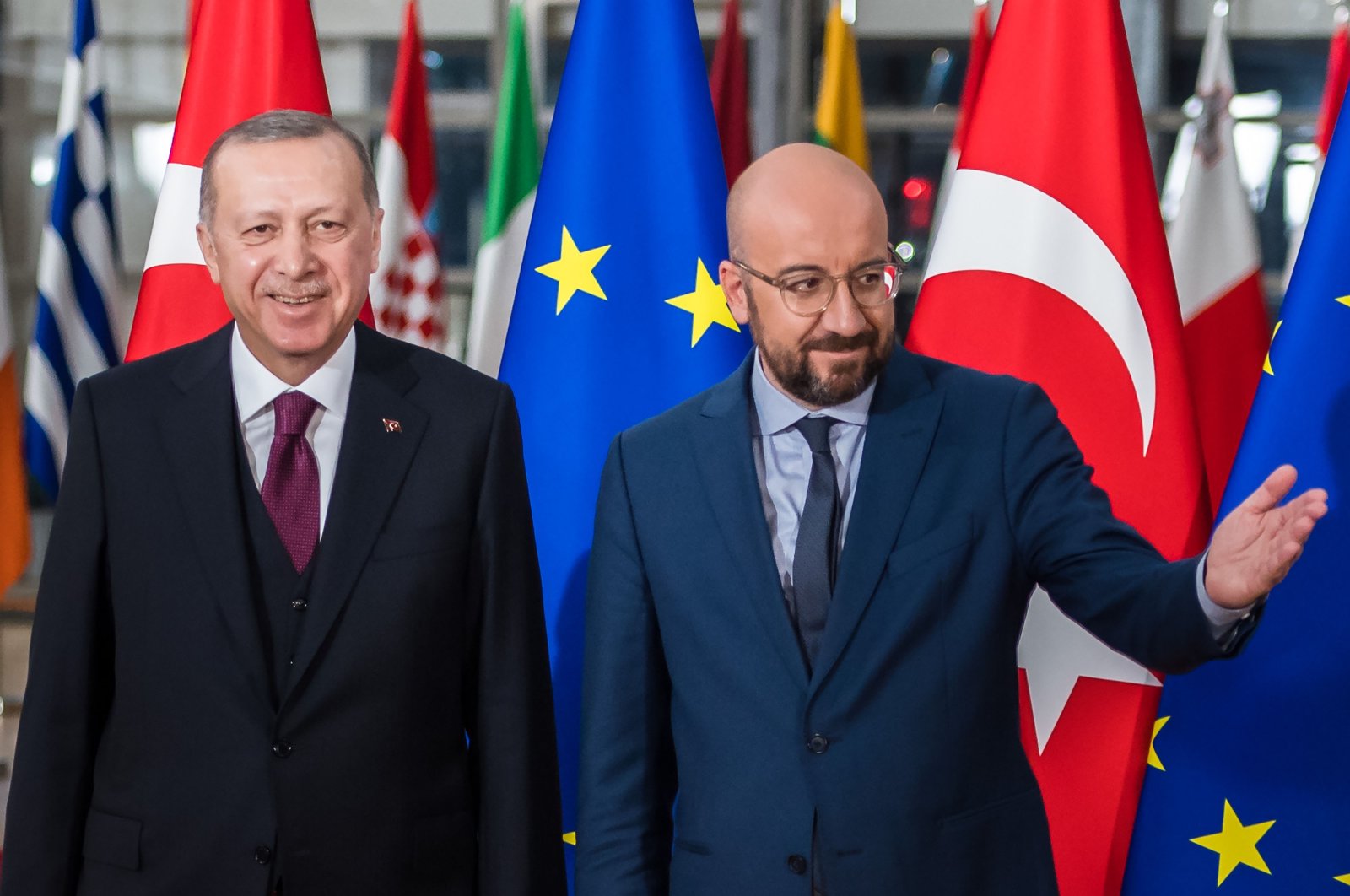 President Erdoğan has once again underlined that Turkey prioritizes the EU in its agenda and sees its future in Europe.

Ankara has opted for a new beginning in ties with the European Union in the new year and continues to send positive messages to overcome disagreements that have been roadblocks between the two allies for the past few years in the relationship. The two strategic allies have been on a bumpy road with different stances on several issues, including the Eastern Mediterranean tensions, Turkey’s role in Syria, the migrant crisis and the stalemate in Turkey’s accession process to the bloc. President Recep Tayyip Erdoğan in his latest message on Saturday once again said Turkey prioritizes the EU in its agenda and sees its future in Europe.

The remarks came during a videoconference with the head of the European Commission to discuss Turkey-EU relations. Erdoğan and Ursula von der Leyen discussed ways to develop relations between Turkey and the EU and addressed regional developments, Turkey’s Communications Directorate said in a statement.

Erdoğan told von der Leyen that the EU is highly important in the nation’s plans moving forward. He reiterated that Turkey sees its future in Europe.

He also pointed out the importance of resuming regular Turkey-EU summits and high-level dialogue.

Turkey wants to open a new page in relations with the EU in the new year, Erdoğan said, adding that the interaction with the EU in 2020 was unproductive due to the whims and artificial problems that some EU members produced, according to the statement.

He added that the situation is unsustainable, not only in terms of future relations but also in terms of the broad common geography.

Following several years of deteriorating relations between Ankara and Brussels due to several issues, Turkish officials have recently offered warm messages to the EU for beginning a new era.

Turkey hopes to turn a “new page” with the EU and wants to build its future with the bloc, Erdoğan said last month during the highest-level contact with a European official since Brussels decided on sanctions in early December.

“While Turkey hopes to turn a new page with the EU, some ceaselessly try to provoke crises,” Erdoğan told European Council President Charles Michel in a telephone call.

Erdoğan called for rescuing Turkish-European relations from “this vicious circle,” adding that he hoped to “start again” in talks with the EU “on a basis of mutual interests.”

On another occasion, Erdoğan stated in late December that 2021 will be a year of foreign policy for Turkey, as he urged all European countries and the U.S. to start with a clean slate in the new year.

Last month, the EU prepared punitive measures over Turkey’s dispute with members of Greece and the Greek Cypriot administration over rights to offshore resources in the Eastern Mediterranean but decided to postpone the measures until March despite an earlier push by Paris to sanction Ankara.

Turkey, which has the longest continental coastline in the Eastern Mediterranean, has rejected maritime boundary claims of Greece and the Greek Cypriot administration and stressed that these excessive claims violate the sovereign rights of both Turkey and the Turkish Cypriots.

Ankara has sent several drillships in recent months to explore for energy resources in the Eastern Mediterranean, asserting its own rights in the region, as well as those of the Turkish Republic of Northern Cyprus (TRNC).

Turkish leaders have repeatedly stressed that Ankara is in favor of resolving all outstanding problems in the region through international law, good neighborly relations, dialogue and negotiations.

In Saturday’s videoconference, Erdoğan added that updating the 2016 migrant deal would be the first step toward a positive agenda on Turkey-EU relations.

In March 2016, Ankara and Brussels signed an agreement to reduce the number of migrants taking the dangerous Aegean Sea route to Europe and to find a solution for the influx of migrants heading to EU countries.

Under the deal, Turkey was promised 6 billion euros ($6.77 billion) in financial aid, which was initially designed to be given to the country in two stages and to be used by the Turkish government to finance projects for Syrian migrants. Visa freedom for Turkish citizens was also a perk of the agreement. Besides, the customs union between Turkey and the EU was to be updated.

In exchange for these promises, Turkey took responsibility for discouraging migration through the Aegean Sea by taking stricter measures against human traffickers and improving the conditions of Syrian migrants living in Turkey. Despite significant developments controlling migration traffic, the EU has not delivered on its commitments stated in the deal.

Erdoğan pointed out that 2021 offers an opportunity for a more productive environment with new cooperation in the field of migration.

The president also said the customs union agreement between Turkey and the EU should be updated, Turkish nationals should be allowed visa-free travel within the Schengen area, and steps should be taken in talks on Turkey’s EU accession.

He also mentioned reestablishing mutual trust and rerunning the consultation mechanism. Erdoğan underlined the need for an end to “exclusionary and discriminatory rhetoric” against Turkey.

Von der Leyen, for her part, said on Twitter: “Good exchange with Turkish President @RTErdogan. We exchanged on the #COVID19 situation, the economic recovery and the implementation of tasking of the European Council of December 2020.”

The EU’s foreign policy chief, Josep Borrell, also in another tweet said that the EU stands ready to continue working on dialogue with Turkey, and he looks forward to welcoming Foreign Minister Mevlüt Çavuşoğlu in Brussels.

The top Turkish diplomat is expected to hold talks with Borrell on Jan. 21.

On Friday, Çavuşoğlu said that Turkey is working to write new chapters in its relations with the EU.

“In 2020, because of some of the problems that we experienced with some member countries, there have been occasional tensions in our relations with the EU, which is not a situation that we wish,” Çavuşoğlu said in a press conference with his Spanish counterpart, Arancha Gonzalez Laya, in the Spanish capital Madrid.

“But, with the approach of Spain and some other countries, rather than tension, the dialogue has been opted for, and the most recent summit prepared the groundwork for this,” he added.

In another message from Ankara, Faruk Kaymakçı, deputy foreign minister and director for EU affairs, told Daily Sabah late December that Turkey hopes to normalize its ties with the European Union in 2021, following a year when tensions have characterized international relations.

In the upcoming year, the country aims to promote win-win relations, to find a fair solution to the Eastern Mediterranean crisis, to update the March 18 statement with all of its dimensions, including migration, carrying out reforms and bringing Ankara closer to the bloc, Kaymakçı said.

Turkey has an extended history with the union and has been working through its longest negotiation process. The country signed an association agreement with the EU’s predecessor, the European Economic Community (EEC), in 1963, which is usually regarded as a first step to eventually become a candidate. Applying for official candidacy in 1987, Turkey had to wait until 1999 to be granted the status of a candidate country. For the start of the negotiations, however, Turkey had to wait for another six years, until 2005, a uniquely long process compared with other candidates.

On top of the slow negotiations, another challenge that threatened Turkey’s ascension into the union was the 2016 Gülenist Terror Group’s (FETÖ) attempted coup that forced the country to declare a state of emergency. Unhappy with the move, the European Parliament on Nov. 24, 2016, stated that it would temporarily “freeze” the talks, which has kept the process at a standstill ever since.