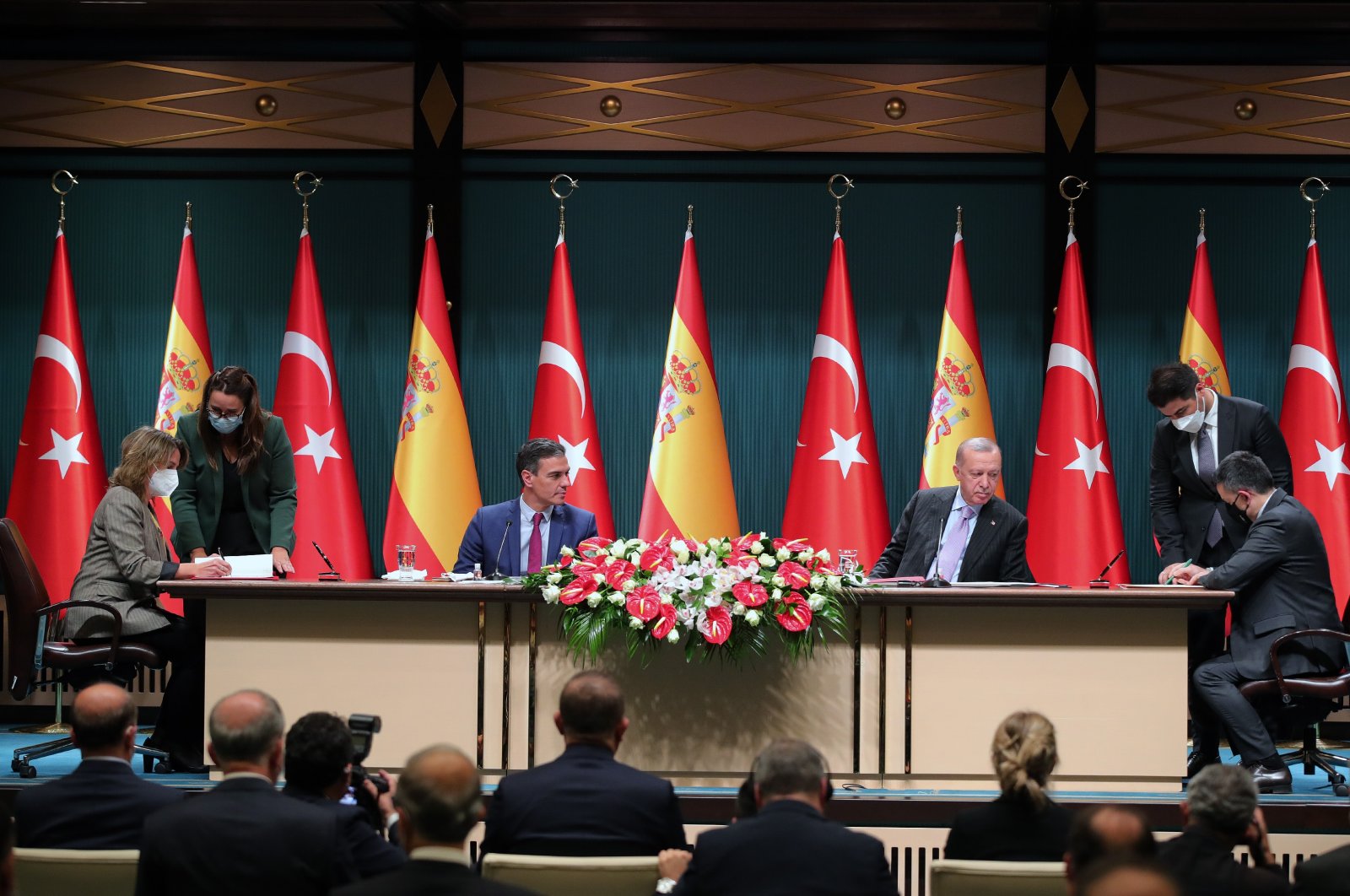 EU needs to take concrete steps on its relations with Turkey: Erdoğan

President Recep Tayyip Erdoğan on Wednesday urged the European Union to take “concrete steps” to develop ties with Turkey, a candidate for EU membership, and also to take a strategic approach to relations with Turkey.

“We as Turkey have displayed our principled attitude and efforts in favor of dialogue and diplomacy with the aim of implementing a positive agenda,” Erdoğan told a joint news conference with Spanish Prime Minister Pedro Sanchez, who was in Turkey for an official visit.

“Henceforth, the European Union should approach its relations with our country from a strategic perspective, and take concrete steps,” he added.

Turkey has been an EU candidate country since 1999, and its accession talks began in 2005, but in recent years its candidacy has been essentially frozen.

“The petty calculations of a few member states should not be allowed to weaken EU and NATO-EU relations,” Erdoğan stressed.

He did not name any member states in particular, but in recent years Turkey has accused both Greece and the Greek Cypriot administration of blocking Turkey’s EU bid for political reasons, and of weakening NATO by forming “alliances within the alliance.”

Erdoğan said efforts to update the Customs Union and visa liberalization for Turkish citizens “should commence as soon as possible.”

On the issue of irregular migration, he said Turkey and Spain shoulder the major load of guarding Europe’s borders, and reiterated the need for policies to ensure “fair burden sharing.”

Turkey and Spain will work to elevate our ties to a “comprehensive partnership,” Erdoğan said.

He said a follow-up mechanism has been set up to monitor the implementation of decisions and the framework for future steps drawn up during Wednesday’s meetings.

On economic ties, he said bilateral trade between Turkey and Spain quickly rebounded to pre-pandemic levels.

Recent statements by Spain’s BBVA bank are also a concrete indication of the trust in Turkey, Erdoğan said, referring to the bank’s bid to buy a majority share in Turkish lender Garanti BBVA.

The Spanish prime minister said his country’s ties with Ankara are at an “extraordinary” level and that Madrid supports Turkey’s bid to join the EU.

“We want Turkey to be a part of the EU. Turkey is not just a neighbor; it is an ally for the EU,” Sanchez said.

Speaking about economic relations, he also pointed to the significant rise in bilateral trade and said the two nations will enhance ties in all fields.

Earlier on Wednesday, Erdoğan welcomed Sanchez with an official ceremony at the presidential complex. Later, they attended the 7th Turkey-Spain Intergovernmental Summit.

The first meeting of the Turkey-Spain Intergovernmental Summit was held in Istanbul in 2009, and the last summit between the two countries was held in Madrid in 2018.

The countries have traditionally enjoyed good relations, and have worked together as co-chairs of the United Nations Alliance of Civilizations initiative.

Erdoğan also said that Turkey hopes to increase defense cooperation with NATO ally Spain through the purchase of a second aircraft carrier and possibly a submarine.

He said Turkey and Spain had already cooperated on the construction of a Spanish assault ship.

“The first aircraft carrier was not a large-scale one. We have agreed on the construction of a large scale,” he said

“And perhaps, we will also enter (cooperation) for a submarine,” Erdoğan added.

“There is so much we can do in the defense industry, including (concerning) armed and unarmed unmanned aerial vehicles,” the president said without elaborating.

This article originally appeared in DAILY SABAH on 17 Nov 2021.