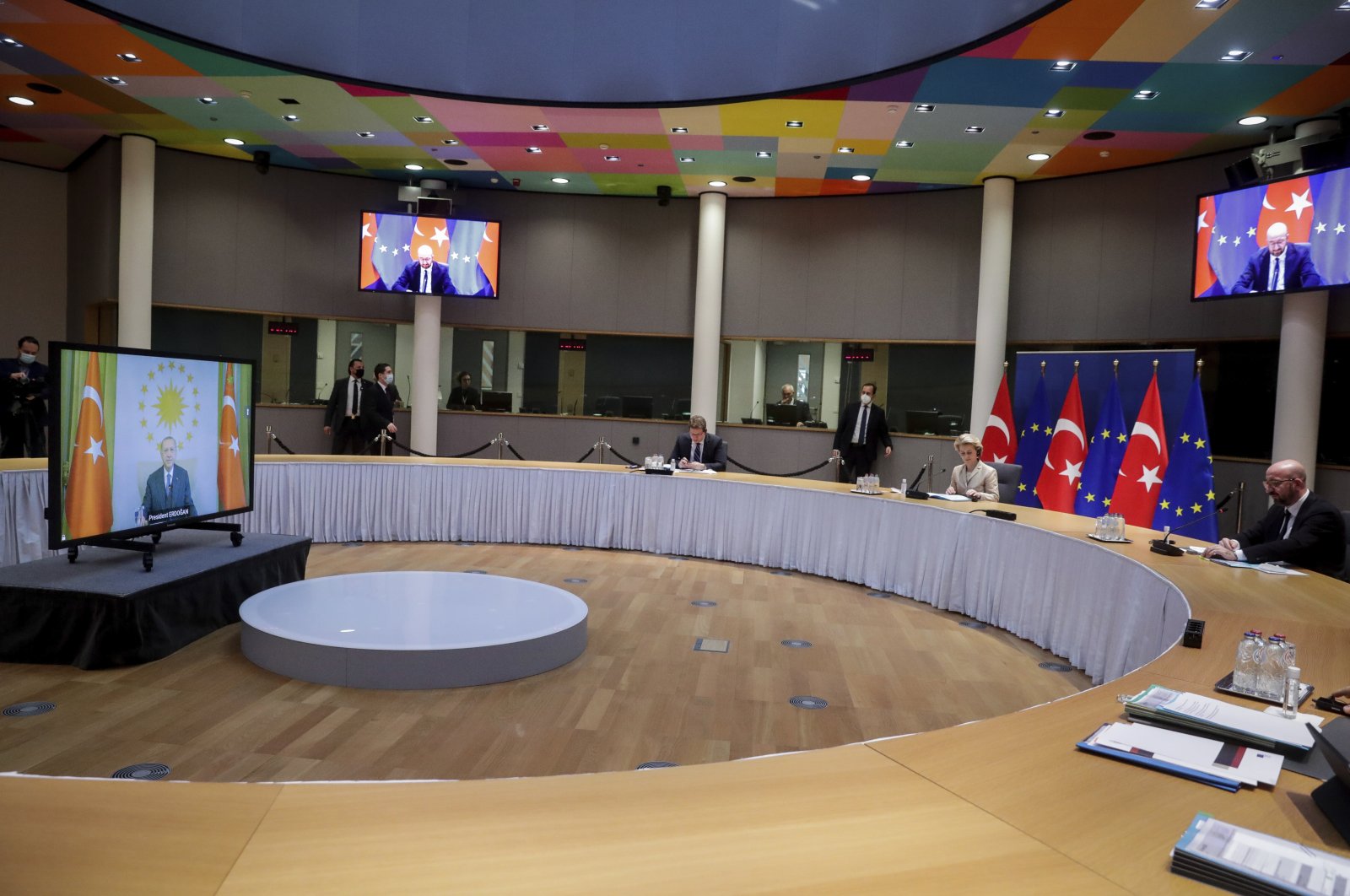 EU leaders said they are ready to launch high-level dialogue with Turkey on issues of mutual concern, as they expressed the desire to improve relations with Ankara, according to a statement released following a virtual summit on Thursday.
Issues of common concern between the bloc and Turkey include counterterrorism efforts, public health and climate, according to the statement.
The bloc’s leaders are ready, “provided that the current de-escalation is sustained,” to discuss modernizing Turkey’s 25-year-old customs union with the EU.
They are also prepared to strengthen cooperation on “people to people contacts and mobility,” a possible reference to visa liberalization.
“In the past month we have seen positive developments … but the situation remains fragile,” EU foreign affairs chief Josep Borrell said before the talks began.
The EU is trying to build on recent conciliatory moves from Turkey after the country was involved in a spat over the Eastern Mediterranean with Greece.

EU members are divided over the approach to Turkey, with the Greek Cypriot administration, Greece and France urging a tough line while others, led by economic powerhouse Germany, take a softer approach.
Brussels has been encouraged by the resumption of talks with Greece over a disputed maritime border and by plans to restart U.N. peace efforts for the divided island of Cyprus. The U.N. is hosting informal talks April 27-29 in Geneva between the rival Greek and Turkish Cypriot sides as well as the island’s guarantors – Greece, Turkey and former colonial ruler Britain.
Turkish leaders have repeatedly stressed that Ankara is in favor of resolving outstanding problems in the region through international law, good neighborly relations, dialogue and negotiations. Instead of opting to solve problems with Ankara through dialogue, Athens has, on several occasions, refused to sit at the negotiation table and opted to rally Brussels to take a tougher stance against Turkey.
The statement also indicates that the 27 states will task the European Commission with preparing a proposal for fresh funds for the more than 4 million Syrian refugees Turkey hosts, and propose stepping up cooperation in curbing illegal migration.
They noted that cooperation with Ankara should be strengthened
Under the migration deal, Turkey promised to seal off its borders and take back irregular migrants from the Greek islands in exchange for some 6 billion euros (7.2 billion dollars.)
The policy curbed the flow of migrants reaching Europe, but has had disastrous consequences for those seeking protection, according to rights organizations.

Turkey has a very long history with the union and the longest negotiation process. The country signed an association agreement with the EU’s predecessor, the European Economic Community (EEC), in 1964, which is usually regarded as a first step to eventually become a candidate. Applying for official candidacy in 1987, Turkey had to wait until 1999 to be granted the status of a candidate country. For the start of the negotiations, however, Turkey had to wait for another six years, until 2005, a uniquely long process compared with other candidates.
Turkey has been putting special emphasis on the need to update the March 18 statement on migration struck with the bloc in 2016, saying that conditions have changed for refugees in five years.

This article originally appeared in DAILY SABAH on 25 March 2021.