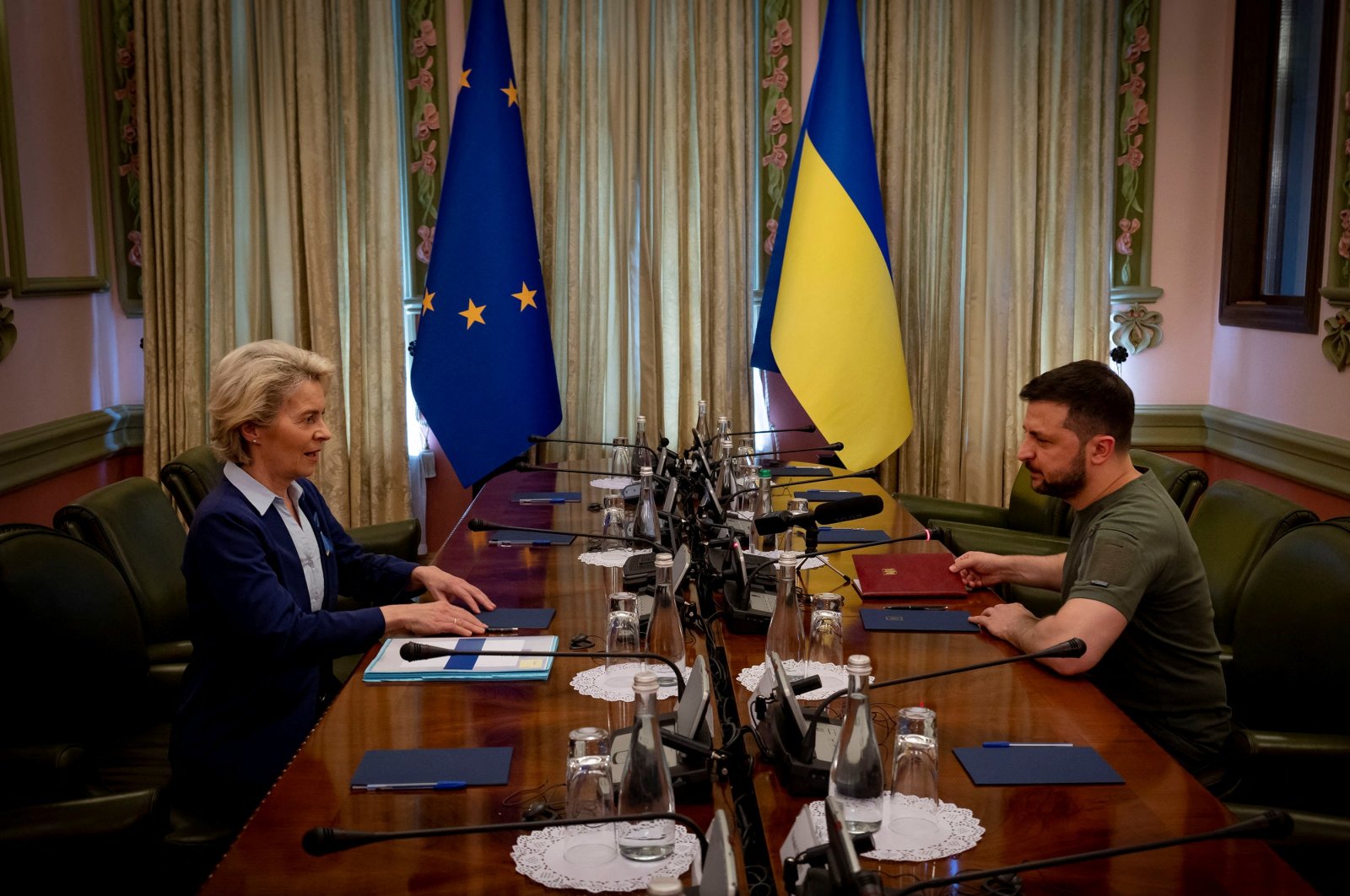 The European Commission President Ursula von der Leyen told President Volodymyr Zelenskyy during a visit to Kyiv that the EU executive would provide a clear signal of her opinion on Ukraine’s request to join the European Union by the end of next week, as fighting raged in the east and south of the country, according to Azerbaijan in Focus, reporting Daily Sabah.

Making a surprise visit to Kyiv, von der Leyen said talks she held with Zelenskyy “will enable us to finalize our assessment by the end of next week” – the first time the bloc has publicly given a timing.

Zelenskyy has been pressing for rapid admission into the EU as a way of reducing Ukraine’s geopolitical vulnerability, which was brutally exposed by Russia’s February 24 invasion.

However, officials and leaders in the bloc caution that, even with candidacy status, actual EU membership could take years or even decades.

Von der Leyen, appearing alongside Zelenskyy during her second visit to Kyiv since the war began, did not hold out any promises, noting further reforms were needed.

For his part, the Ukrainian president warned it was a “decisive time” for his country and the EU.

“Russia wants to ruin the European unity, wants to leave Europe divided and wants to leave it weak. Entire Europe is a target for Russia. Ukraine is only the first stage in this aggression, in these plans,” he said.

Despite reservations among some member states, EU leaders are expected to approve Ukraine’s candidate status at a summit on June 23-24, though with stern conditions attached.

The EU and the United States have strongly backed Ukraine, sending weapons and cash to help it see off Russian forces, and punishing Moscow with unprecedented economic sanctions.

Zelenskyy has urged them on, during a continuous diplomatic offensive that has seen him appearing via video link at parliaments and summits around the world.

On Saturday, he warned the Shangri-La Dialogue security summit in Singapore of the dangers of a global food crisis posed by Russia’s blockade of Ukraine’s Black Sea ports.

He warned of “an acute and severe food crisis and famine,” adding that the “shortage of foodstuffs will inexorably lead to political chaos” – all of it “the direct consequence of the acts of the Russian state.”

Before the war, Ukraine was the world’s top producer of sunflower oil and a major wheat exporter, but millions of tonnes of grain exports remain trapped due to the blockade.

Kyiv is in discussions with the United Nations, Turkey and other countries to open a way to allow the grain exports, and Zelenskyy said the talks are focused on the “format” of the corridor.

After withdrawing from the capital Kyiv, Russian forces have concentrated their firepower on the eastern Donbass region and the south.

They continued their bombardment overnight Friday-Saturday of towns and villages around Kharkiv and in the Donbass regions of Lugansk and Donetsk, Zelenskyy’s office said.

“Russia wants to devastate every city in the Donbass, every single one, without exaggeration,” the president said in his nightly address Friday.

He declined to estimate the number of civilian victims, but said he expected the figure would be “enormous and terrible.”

“Many people were buried in front of their houses’ entrances. A shell from heavy artillery is tearing people up into bits and pieces,” he said.

He added: “They lie like this for a day, three or four. It is impossible to take them out because there is constant shelling.”

In the Mykolaiv region near the front line in the south, regional Governor Vitaliy Kim stressed the urgent need for international military assistance.

“Russia’s army is more powerful, they have a lot of artillery and ammo. For now, this is a war of artillery… and we are out of ammo,” he said.

Following Washington’s lead, Britain announced the delivery of multiple rocket launcher systems – with a range of about 80 kilometers (50 miles), slightly superior than the Russian systems.

It was not clear when Ukraine will be able to start using them.

In areas now controlled by its forces, Moscow has sought to impose its authority.

Authorities in the occupied city of Kherson in southern Ukraine handed out Russian passports to local residents for the first time on Saturday, news agencies reported.

Russia’s TASS agency said 23 Kherson residents received a Russian passport at a ceremony through a “simplified procedure” facilitated by a decree signed by Russian President Vladimir Putin in May.

Ukraine has denounced the move as a “flagrant violation” of its territorial integrity, saying Putin’s decree was “legally void.”

It follows the introduction last month in the Kherson region of the Russian ruble as an official currency alongside the Ukrainian hryvnia.