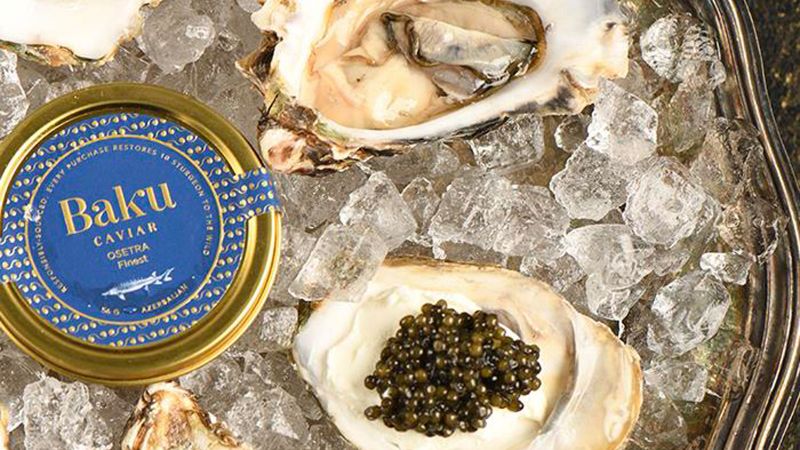 “Evil days” for black caviar are over?

It was COVID-19 pandemic that hit hard the “luxury” goods market (diamonds, expensive cars, black caviar and upmarket alcohol). However, the softening of quarantine measures, opening of restaurant and tourism business around the world in 2021 have reanimated the trading segment which, no matter what, brings great profits. Thus, it became obvious from sales of black caviar of sturgeon family, the demand for which has grown at expensive restaurants, caviar boutiques, on yachts and cruise liners since the first quarter of 2021. This opinion is typical for one of the latest reports of EUMOFA (European Marketing Observatory of Fishery and Aquaculture).

It has to be kept in mind that the West is aware of the Caspian black caviar from Russia and Iran as the most high-quality basic product.
There are about 80 sturgeon fish factories (SFF) in Russia, and 128 sturgeon farms (SF) in Iran.

It should be noted that it is planned to open a caviar museum in the second half of 2021 in the Iranian province of Gilan located next to the Caspian Sea, and this is rather symbolic: high costs for this product resulted in the fact that you can only look at it, but “can’t afford” to try it.
One of the most expensive dishes on the planet is the Caspian albino caviar “White Pearl” which can be eaten only once in 100 years, the fact that accounts for its high price at the market: a few years ago, Iran sold a batch of such caviar at the price of 1 kg for 20, 000 pounds.
Of interest is the fact that Iran is minded to produce 100 tons of black caviar per year by 2025 (10 times more than Azerbaijan’s quota) and win second place in the world by its sales.

Head of the Center for Industrial Expertise of the Russian Rosselkhoznadzor, Andrew Dalnov pointed out that a share of black caviar in the volume of export deliveries of all types of caviar from the Russian Federation in 2020 fell to 0.2% (main buyers are the USA, Canada, Australia, Republic of Korea, China). However, in 2021 figures have gone up.

To his thinking, the rise in demand for caviar might be explained as being due to two main reasons.
“First of all, this is an increase in the share of the middle class and the demand of restaurants with premium cuisine from different countries, including Russian. Second, there is an additional demand from companies in the non-food sector where caviar is used as a component for the production of cosmetic and pharmacological products,” the Russian expert believes.

It was China that understood it promptly: the country is holding leading positions both in the production of black caviar at aqua-farms and its consumption.

Since 2005, many Western countries have ceased purchasing black beluga caviar from the Caspian basin due to fears that overfishing will destroy the species in this natural reservoir.

It is worth reminding that in the 21 century the caviar from sturgeon grown in artificially created environment began to gain popularity.
In addition to China, SFF came to be created in a number of European countries and Israel. It should also be recalled that the United States was in the 19 century a major exporter of black caviar, so they are currently developing sturgeon farms.

According to the EUMOFA report, Chinese fish farms have reached an export target of 150 tons of caviar per year, and figures can grow on.
It should be recognized that the Chinese “Kaluga Queen” has become the world’s largest producer of caviar(third of the world’s production).
According to EUMOFA experts, the rapid growth of caviar production in China is likely to boost the international competition and affect caviar prices (in 2020, rise in price was 10% as compared to 2019).

For instance, the British imported 4 tons of black caviar in 2020.
The online publication “Luxury London” recently reported that in spring 2021, a 50-gram jar of black caviar Royal Beluga, or Imperial Oscietra from the Caspian Sea cost 130 pounds and more in the UK capital while the highest quality of the caviar and its unique taste make it the most valuable and coveted.

A caviar boutique in Baku “Baku Caviar” at the “Maiden Tower” told ASTNA that in the Soviet times the Caspian black caviar was delivered to the Kremlin while one of the most famous fans of this caviar was Sir Winston Churchill.

It should be acknowledged that the black caviar production in Azerbaijan dates back to 1954 when the first sturgeon breeding plant was built in the Neftechala region of the country (now it is supervised by the company Azerbaijan Fish Farm).

It is useful to highlight that the Caspian Sea was the world’s largest reservoir for replenishing sturgeon as the oldest species of large-sized fish. Until the end of the 20 century, sturgeon caught in this reservoir accounted for up to 90% of the world catch of sturgeon.

It is important to notice that the sturgeons usually oviposit on rocky bottoms of rapid rivers. For spawning the Caspian sturgeons go to rivers Volga, Samur, Kura, Arax, Terek, and Ural.

Note that maximum catches of sturgeon in the Caspian basin were recorded in the early twentieth century – about 40,000 tons per year, and in the late 1970s – about 30,000 tons per year. A sharp decline in the number of sturgeon began in 1991 to coincide with the collapse of the USSR for which the sale of caviar was an important source of income.

It should be remembered that the corruption and lawlessness that reigned in this industry gave leeway not only to state-owned companies but ordinary fishermen as well in catching sturgeons uncontrollably for the sake of their meat and black caviar.

In the 80-90s, the total production of black caviar in the world reached up to 1000 tons per year.
The turning point came in the beginning of the 21 century when the Caspian countries recognized the existential threat for the sturgeon population. The Caspian sturgeon was listed in the international “Red Book”.

Since 1998, the Convention on International Trade in Endangered Species (CITES) has been responsible for regulated international trade in sturgeon and caviar, and by 2020, the total caviar production worldwide decreased to 300 tons.

Moreover, this business requires a well-documented supply chain from the farm to the consumer, as well as the labeling indicating the type, country of origin, year of collection of caviar, etc.

Emphasis needs to be placed on the fact that Russia has banned the commercial fishing of beluga in the Volga-Caspian basin since 2000, sturgeon and sevryuga – since 2005. By 2011-14, the same measures (a moratorium on industrial fishing of sturgeon) have also been taken in Azerbaijan, Kazakhstan, Iran and Turkmenistan. A summit of the Caspian states made a unified decision in 2014 to ban large-scale fishing of sturgeon, so the moratorium is extended every year, and since then the countries have reported on their actions to release sturgeon fry into the reservoir to replenish the population and specify their quotas for catching these fish species and the production of black caviar.

According to the Ministry of Ecology and Natural Resources of Azerbaijan, the number of sturgeons in the Caspian Sea has dropped nearly10 times as compared to the 1990s, and currently the only way to preserve the natural populations of these fish is their artificial reproduction at sturgeon hatcheries and the release of fry into natural reservoirs.

Note that a representative of the Ministry of Ecology, Mehman Akhundov makes no secret of the fact that the ecosystem of the Caspian Sea has weakened and fish stocks depleted.

In his view, that has been influenced both by the human factor (poaching, pollution of the reservoir with various types of waste) and natural phenomena (global warming and shallowing of rivers).

Akhundov believes that now we should focus not on fishing, but on fish farming.
It should be remembered that there are about 600 fish farms (small and large) operating in Azerbaijan; however, some of them are engaged in sturgeon farming. These include the Az-Varvara farm (cages in the Mingachevir reservoir and in Yevlakh on the bank of Kura – Khilla fish factory), the Azerbaijan Fish Farm in the Neftchala region and the “Nerekend” complex opened in 2019 for 30 jobs in Pirallahi.

These fisheries are trying to annually release about 8-9 million pieces of fry into the Caspian Sea in total. As a whole, according to the Ministry of Ecology estimates, since 2001, Azerbaijan has released up to 180 million pieces of sturgeon fry to the Caspian Sea. However, this is enough to fully meet the needs of the domestic and foreign markets.

At present, caviar in Baku is sold in special departments of large hypermarkets or specialized fish boutiques.
The price for a 113-gram jar of black caviar in Baku is about $100 and above. No more than 250 grams of black caviar per person can be exported from Azerbaijan. When adjusted for the fact that the sale of this product has been strictly controlled by the state over the last 10 years, it is recommended to buy and taste caviar only in specialized stores, and when exporting it, you must have a cash receipt confirming the legality of the purchase.

Note that the demand for Caspian black caviar among tourists and guests of Baku is still maintained.
This is explained as being due to the fact that the black caviar, even in small portions, contains a significant amount of omega-3 fatty acids, vitamin B12, selenium and other vitamins and minerals which are useful for skin, brain, heart, immune system, as well as increase male fertility.
Black caviar is still used as a “bait” – a gift for certain politicians abroad which led to the emergence of the term “caviar diplomacy” in Europe.
Most probably, black caviar is unlikely to face “evil days”.