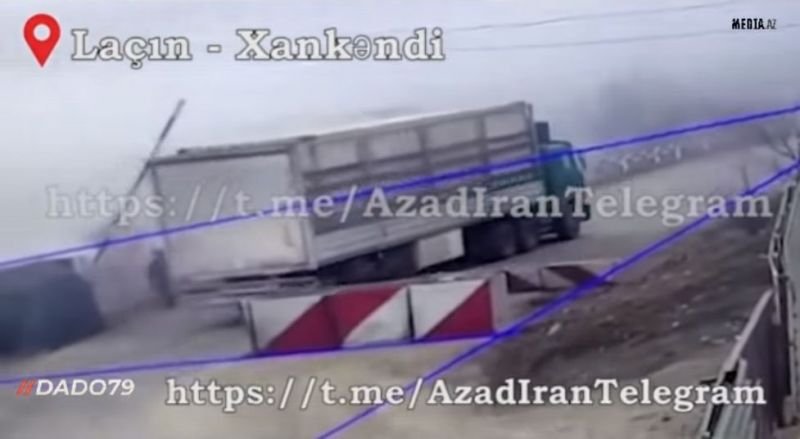 Experts: Azerbaijan should achieve control over the transportation of goods to the zone of responsibility of Russian peacekeepers

Yesterday the Defense Ministry sent letters to the Defense Ministry of the Russian Federation and the command of the peacekeeping forces in connection with this issue. The letters noted that such cases contradict the trilateral statement of the Presidents of Azerbaijan and Russia and the Prime Minister of Armenia on November 10, a request was made to prevent such cases.

On August 11, the Iranian ambassador to Baku, Seyid Abbas Mousavi, was summoned to the Azerbaijan Foreign Ministry, where he was handed a note.

What other steps should Azerbaijan take to prevent this illegal cargo transportation to the Karabakh region? Why don’t Russian peacekeepers prevent this?

Member of the Milli Majlis Committee on Defense, Security and Combating Corruption Aydin Mirzazade noted that when the agreement was signed on November 10, Azerbaijan did not expect everything to go very smoothly, because, although a long-term, very difficult and complex problem was basically solved, resolving certain issues took time. Time has shown that this is indeed the case. “The continuing shelling of Azerbaijani territories by Armenia, its refusal to sign a peace agreement, the temporary presence of Russian peacekeepers on our territory and certain violations of Azerbaijan’s sovereignty” are issues that still exist.”

The MP noted that Azerbaijan did not hide and openly announced this to the Russian side and the international community. “Azerbaijan expressed its serious dissatisfaction with the illegal passage of Iranian vehicles through the post of Russian peacekeepers to this territory. From the very beginning, this was also reported, and then a note was given. We want to hope that the Russian side will restore order in this matter.”

The MP stressed that Azerbaijan does not intend to close its eyes to this issue or to compromise. “In this matter, we expect certain steps from Russia. At the same time, work is underway with the Iranian side. Because these cargoes come from Iran, and the Iranian authorities should work with these companies as a subject that violates the territorial integrity of Azerbaijan.”

According to the deputy, the creation of a post on the Goris-Kafan Road passing through the territory of Azerbaijan in recent days and the inspection of these vehicles is the sovereign right of Azerbaijan. “Azerbaijan protects and will defend its rights. Azerbaijan has prevented and will continue to prevent illegal entry into its territory. Azerbaijan’s decisiveness will reduce and ultimately disappear these problems.”

Elkhan Shainoglu, head of the Atlas Research Center, said the notes did not work. “The note is usually given to the country so that it can slightly adjust its policy. But after the note Iran not only did not stop cargo transportation but also increased the amount of cargo”.

According to the expert, in this case, Azerbaijan must make certain decisions. “The first step should be to lower the level of relations with Iran. There are four principles of interstate relations: good neighbourly relations, partnerships, strategic partnerships and strategic allies. We call Russia and Iran partners at the official level, but as a result of these provocations with Russia and Iran, it will be necessary to reduce this level to good-neighbourly relations.”

He noted that it is necessary to impose sanctions against companies and their leaders who illegally cross the territory of Azerbaijan. “The third step was implemented yesterday. Control has been strengthened on the Azerbaijani section of the Goris-Kafan Road and Iranian trucks are being checked.”

The political scientist believes that the Lachin corridor should be taken under control because even if Iranian cargo is stopped at the specified section, cargo from other countries will pass through. “We are not against the passage of these goods. This is not a problem if fuel is transported there and this fuel is needed by civilians. But this should be with the consent of Azerbaijan, contracts should be concluded. We need to know what kind of cargo they are.”

According to Shainoglu, the issue should be raised before Russia in the form of a demand. “Because the talk is about Azerbaijani lands. If our demands are not met, we must reconsider the November 10 statement.”