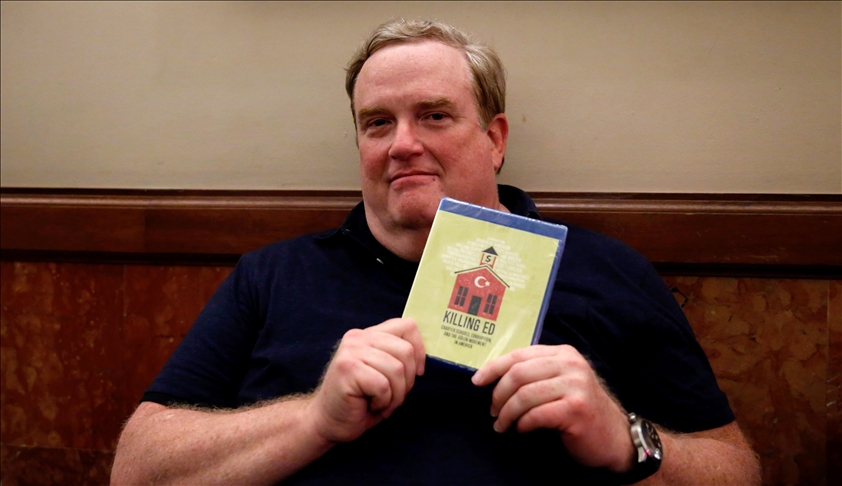 FETO tried to oust Turkish gov’t with money made in US: Film director

'We saw the infiltration of the Gulen movement into the political structure here in the United States,' says Mark Hall

The Fetullah Terrorist Organization (FETO) tried to overthrow the democratically elected government of Turkey with money generated inside the US, said an American film director.

In an interview with Anadolu Agency ahead of the fifth anniversary of the July 15 defeated coup attempt, Mark Hall, director of the 2016 documentary “Killing Ed,” which probed the financial misdeeds of FETO-linked charter schools in the US, called the FETO group a “mysterious” and “shady” organization.

“It is very extensive and it has a lot of money,” said Hall, adding that the group behind the deadly putsch attempt was making money from 173 charter schools in the United States.

“These are schools that are free to parents that are paid for by US taxpayers.”

Hall said much of that money was going to political goals of the FETO group both in the United States as well as in Turkey.

“And we saw the infiltration of the Gulen movement into the political structure here in the United States with trips to Turkey for very high-level political figures,” he added.

FETO and its US-based leader Fetullah Gulen orchestrated the defeated coup of July 15, 2016 in which 251 people were killed and 2,734 injured.

Ankara also accuses FETO of being behind a long-running campaign to overthrow the state through the infiltration of Turkish institutions, particularly the military, police and judiciary.

Gulen has lived in self-exile in the United States near Saylorsburg, Pennsylvania since 1999.

During the coup night, fighter jets flew low over Ankara and Istanbul, and sonic booms from these aircraft caused panic and anger among people, with some others being run over by tanks and shot at by helicopters.

The putsch attempt was foiled by thousands of people who took to the streets after President Recep Tayyip Erdogan’s Facetime call to quell the advance of the troops.

“If that happened here in the United States, it would be shocking…It would be as worse as any other event in recent history; 9/11 or attempted assassinations of presidents.

“It would be such an unusual event that Americans might not even be able to comprehend it…It would be quite unusual and very shocking to all of us here,” he added.

Since the defeated coup attempt, Turkey has sought Gulen’s extradition from the US and complained that Washington is not moving fast enough.

This article originally appeared in Anadolu Agency on 15 July 2021.