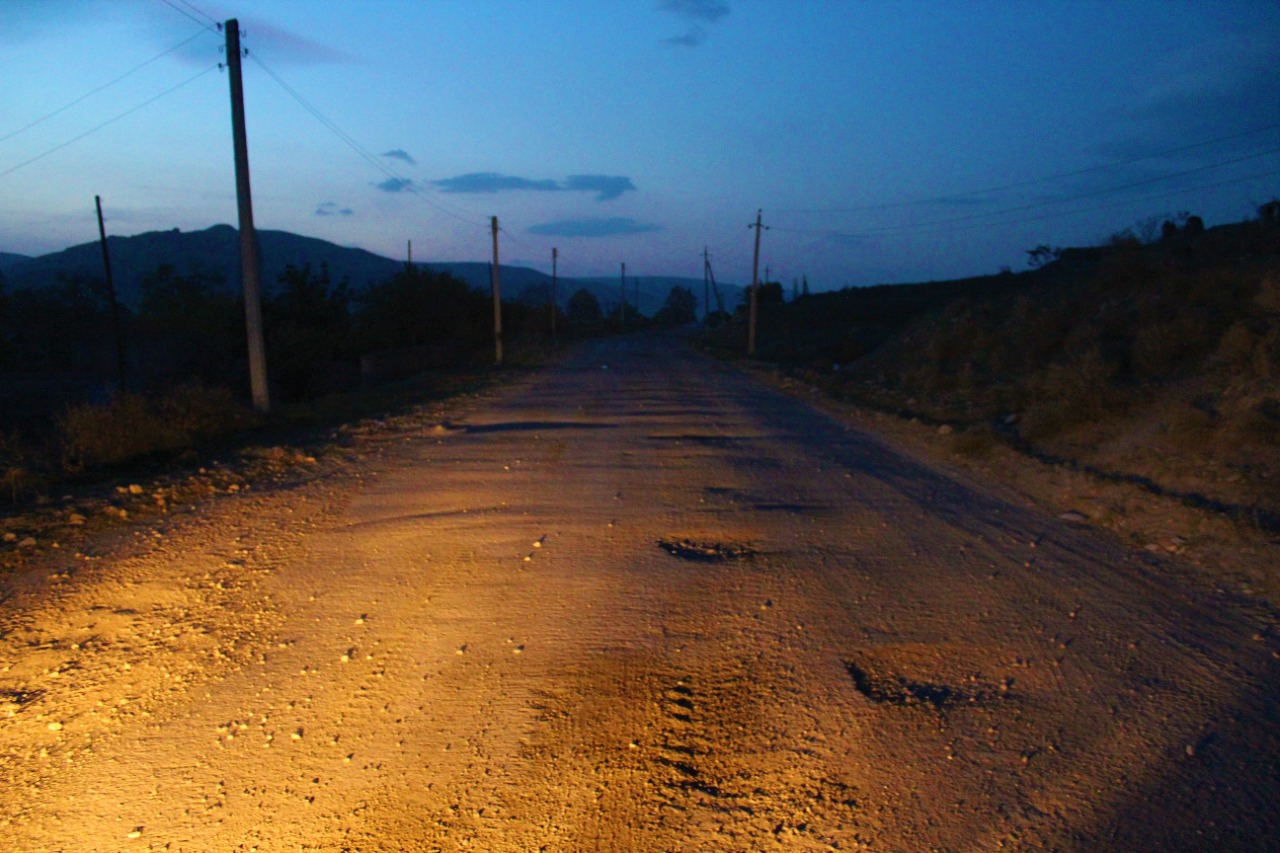 Road from Gubadli to Lachin

Jabrayil: Probably, there was a time when all these villages were different, but now they can only be distinguished by the names on the signs

… Literally in a few minutes we find ourselves in a completely different world: pieces of asphalt on a destroyed road, demolished one- and two-story gray houses, courtyards with dried, long yellow grasses … There are houses that have fallen to the ground and are coated with grass. Maybe in spring this scene looks different in the greenery. But now, in a place where people had been forced to leave 28 years ago, the whole living world consists of single bushes and trees that pierce the walls of dilapidated houses. Until August 23, 1993, life was in full swing here, people worked and farmed, children played in the yard. 28 years ago, the sounds of children in the courtyards were replaced by the gunshot, the roar of artillery and the sound of military vehicles destroying asphalt. There has been a deep silence ever since, as no one lived here. The people of Jabrayil were expelled from their native lands and located in about 2,000 settlements through 58 regions of Azerbaijan.

We are moving towards Jabrayil region from the side of Leletepe, a height liberated from occupation in April 2016. Only one village in Jabrayil, Jojug Marjanli, was liberated in 1994, and life was restored after the return of the strategic Lalatapa plateau.

However, as a result of the Azerbaijani army’s counter-offensive operation since September 27 this year, most villages in the region, including the city of Jabrayil, have been cleared of the Armenian Armed Forces.

Perhaps, once these lands could be separated from each other, but now they differ only in the blue plaques with their names written on them. All the villages are the same: dilapidated houses, farms, tree branches running through the old walls, yellow grass in accordance with the season. Cemeteries were also destroyed, most of the headstones were broken and overturned. The surviving ones disappeared into the grass. The military serving in the area does not allow to leave the “route”, to go close to the rubble: there is a danger of mines and other explosive devices, the areas must be cleared first. Therefore, we are still observing from the side.

Although 90 percent of the houses in Jabrayil have been destroyed, it is sometimes possible to come across a new building. It is clear that Azerbaijanis do not live in them. There are fields that have been cultivated and vines planted. Facilities for irrigating fields and even farms are visible. Occasionally we see vineyards planted before the occupation, but it is clear that they were last maintained at least 28 years ago. In general, there was almost no one living in the villages. The only exceptions are the buildings and farms I mentioned, as well as military towns, headquarters, and barracks.

Before the occupation, there were 35 kindergartens, 65 secondary schools, 1 technical vocational school, 73 hospitals and other medical institutions, and 63 cultural facilities in Jabrayil. Now there are no traces of any of them.

But… Life is returning to Jabrail! People in civilian clothes and vehicles are visible on the streets. The poles are being installed to supply electricity. A little further, workers are installing mobile network equipment. They look at the journalist in surprise.

At the end of the highway connecting the villages of Jabrayil, the road is divided into two: a bend to the left leads to Zangilan, and a straight road leads to Gubadly. Following a pre-planned route, we drive to Gubadly.

The first village on our way is called Balasoltanli. Most of what we saw in Jabrayil also applies to Gubadly: houses built mainly of river stones, and farms here are also in ruins, the asphalt is old and crumpled. There are stumps of sawn trees along the edges of the road. And the cemeteries are the same. For security reasons, I was again not allowed to come close to the graves, but from a distance it was clear that some of them had been excavated. I wonder what they were looking for there….

But unlike Jabrayil, new buildings erected after the occupation are more common in Gubadly. Along with the Armenian military, civilians have lived in the villages, and service facilities have worked. The Armenian population settled here have been mainly engaged in animal husbandry. In many villages in the direction from Gubadly to Lachin, shops, points of sale of phones and mobile numbers have functioned, schools have operated; there are gas stations too. The area bordering Lachin demanded special attention. There is also a large military camp built in recent years.

Road from Gubadli to Lachin

We enter the elementary military training class in the school building located in Muradkhanli village, located directly on the border with Lachin. One gets the impression that children were being prepared here to enter military academy. The pictures and posters hung on the walls of the classroom with information about the technical parameters of weapons, the composition of explosives, artillery and missiles, trenching technology, information on the creation of safety zones, etc… give full reason to say so.

After the occupation of Lachin, Aghdam, Fizuli and Jabrayil districts, Gubadly district became a de facto semi-siege and was occupied in 1993. To date, more than 30,000 Gubadli residents have settled as IDPs in two cities and regions of the country. There were 21 secondary, 15 eight-year, 15 primary schools and 7 preschool educational institutions in Gubadli. There were 111 cultural and educational institutions in the district, including 60 libraries, 10 culture houses and 28 clubs, 6 car clubs.

On October 20, as a result of the counter-offensive operation of the Azerbaijani army, Gubadli was released. The territory of the area bordering Lachin is still under fire as the fighting continues in this direction.

Homeland “gray” during the day, “white” at night

We return after visiting the liberated areas of Jabrayil and Gubadly. It is not easy to walk on a broken road in daylight, not to mention at night, especially on our transport, which is not adapted for this kind of travel. Obviously, the lights on the road have not been installed yet. There was complete darkness and silence. This silence is sometimes broken by the sound of military vehicles. Villages with ruined houses in the dark resemble white hills, yellowed grass glistens in the headlights and quickly goes out.

This environment creates an indescribable psychological tension you. It’s as if some force is pushing you down from your shoulders. For 28 years, such an atmosphere has prevailed here, day and night. There was no life here, with the few exceptions we talked about. Those exceptions served to increase the tension of the atmosphere.

These lands, which are “gray” during the day and “white” at night, are now free! This is the main thing.

Life returns to these lands. While in Gubadly, I received several calls from Baku. We talked comfortably.

Photographs are copyrighted and owned by reporter Seymur Kazımov.

This article originally appeared in pressklub on 04 Nov 2020.