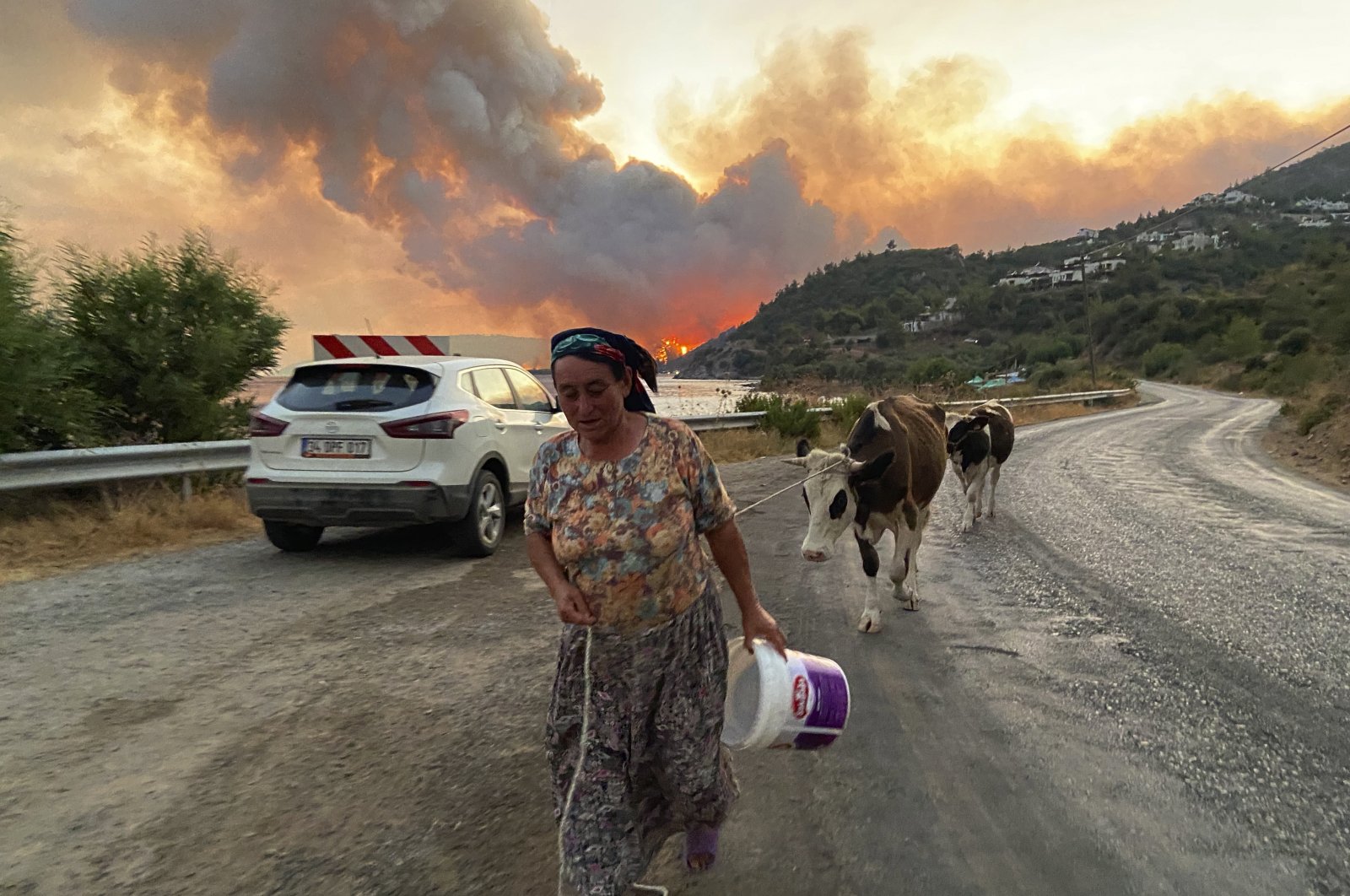 A woman leaves with her animals from an advancing fire raging in the Çökertme neighborhood, near Bodrum, in Muğla, southwestern Turkey, Aug. 2, 2021. (AP PHOTO)

Only 13 wildfires remain out of dozens, but on Tuesday, Turkey still struggled to contain flames worsened by strong winds. Firefighters in six provinces have been battling various blazes since last Wednesday. The worst fires in terms of size and speed of flames are in the Manavgat and Gündoğmuş districts of Antalya and in the Marmaris and Milas districts of Muğla.

In Muğla, Çökertme Bay, a famed cove surrounded by pine and olive trees, was engulfed by a massive fire. Firefighters on the ground and water bomber planes and helicopters above were combatting the fire, hoping to stop it from reaching a thermal plant, while residents of the Çökertme neighborhood were evacuated.

To the north, a fire broke out in the Bozdoğan district of Aydın province and was brought under control on Monday morning as the flames were approaching neighboring Muğla. Also, early on Monday, a pine forest caught fire in Muğla’s Menteşe district. Forestry workers, firefighters and locals rushed to put out the flames.

The fire that erupted in the Gündoğmuş district of Antalya was largely under control late Monday, five days after it started. However, strong winds in the area occasionally spread the flames across many neighborhoods. The town center, where more than 7,000 people lived, was evacuated. Airplanes and helicopters, which were forced to stop efforts as the night fell, resumed operations on Tuesday morning.

In Manavgat, where dozens of houses were burned in a fire that killed seven people, including two firefighters, another neighborhood was evacuated late Monday.

Investigations are underway for potential arson, which may have caused the major fires. Authorities had earlier stated that it was being investigated whether the PKK terrorist group, which was behind previous arsons, was also the perpetrator of these forest fires. In some neighborhoods of Manavgat, where fires broke out one after another, people started patrolling streets against “arsonists.” Local security officials urged the public not to believe in disinformation and rumors being spread on social media and WhatsApp groups.