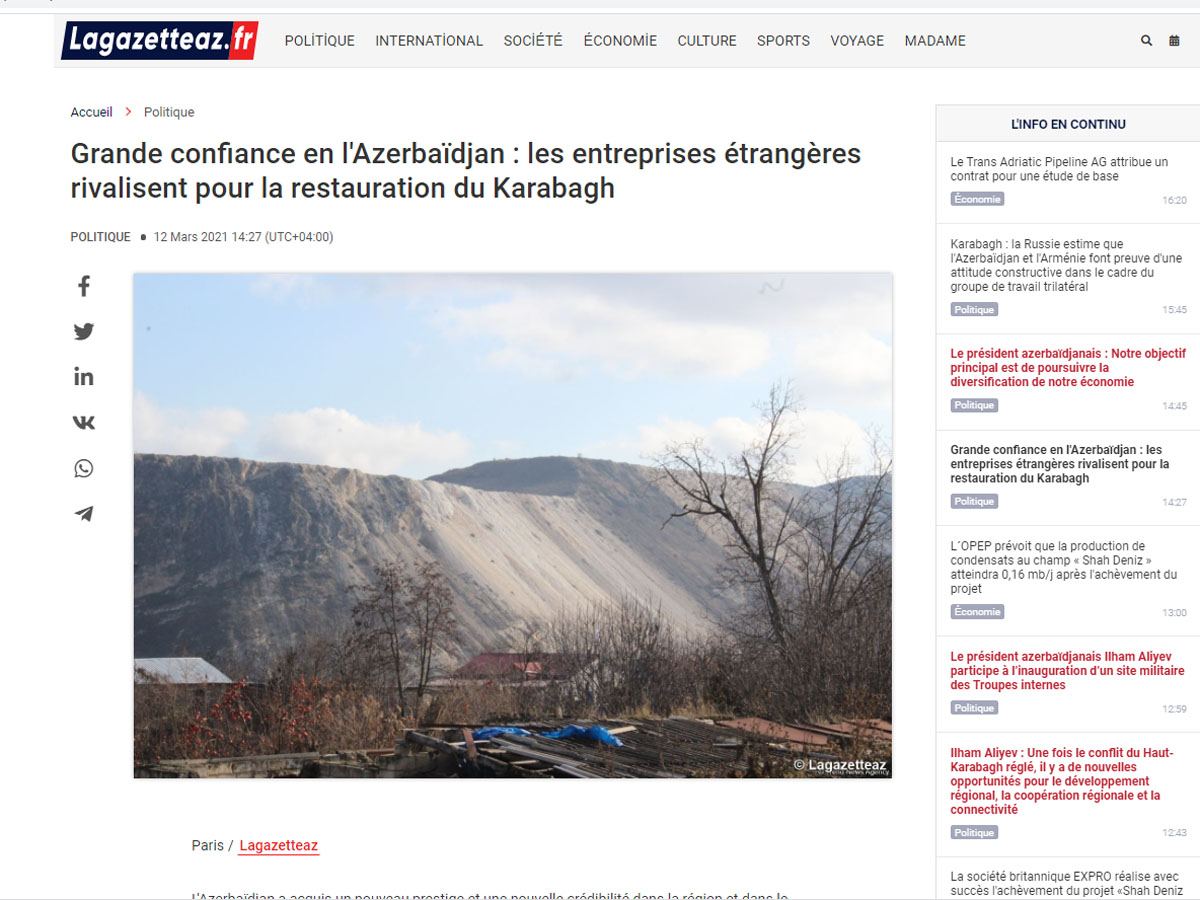 The French http://www.lagazetteaz.fr online newspaper published an article entitled “High Confidence in Azerbaijan: Foreign Companies entered into Competition for the Restoration of Nagorno-Karabakh region”, according to Azerbaijan in Focus, reporting Trend News, referring to the online newspaper on March 12.

“Having liberated its lands, which had been under occupation for about 30 years, Azerbaijan further strengthened its authority and trust in the region and the world,” the article said. “The countries that wanted to invest in Azerbaijan, but did not risk due to the conflict [the Armenia-Azerbaijan Nagorno-Karabakh conflict], now want to cooperate with it.”

“Foreign companies entered into the competition to participate in the restoration of the Azerbaijani territories liberated from the Armenian occupation,” the article said. “The meetings have already been held with the heads and representatives of these companies at the official level. The discussions have been held and even agreements on specific cooperation have been signed. Turkey, Russia, the UK, Pakistan, Italy, France, the Netherlands, Iran, etc. can be cited as an example.”

“Moreover, Azerbaijan continues to receive the proposals for cooperation from other countries and international organisations,” the article said. “While receiving Hungarian Minister for Foreign Affairs and Trade Peter Szijjártó by Azerbaijani President Ilham Aliyev on March 10, the main discussed issue was the participation of the Hungarian companies in the restoration of the liberated territories.”

“During the meetings held within his visit to Azerbaijan, Szijjártó stressed that the Hungarian companies are interested in participating in the restoration of the liberated lands, in particular, in the construction of a “smart” city,” the article said.

“Water resources management is important in these territories and Hungary, having great experience in this sphere, can make a great contribution to the restoration of the Nagorno-Karabakh region,” the article said.

“During Szijjártó’s visit to Azerbaijan, the “Joint Declaration on Strategic Partnership between Azerbaijan and Hungary”, which will further strengthen ties between the two countries was signed,” the article said. “Fruitful cooperation is confirmed by the growth of mutual trade turnover, including an increase by 6 percent in Hungarian export to Azerbaijan and by 60 percent in Azerbaijani export to Hungary.”

“Along with Hungary, the US companies are also interested in participating in the restoration of the Nagorno-Karabakh region,” the article said. “During the meeting with Azerbaijani Energy Minister Parviz Shahbazov on March 11, US Ambassador to Azerbaijan Lee Litzenberger stressed that the US supports the Southern Gas Corridor project and his country’s companies are interested in participating in the reconstruction and restoration of infrastructure in the liberated territories of Azerbaijan.”

“Therefore, it is possible to say with confidence that through its internal capabilities, as well as the experience of other countries and the potential of foreign companies, Azerbaijan will restore more than 10,000 square kilometres of the liberated territory in a short period of time and the inhabitants of these lands will be able to return to their houses,” the article said.