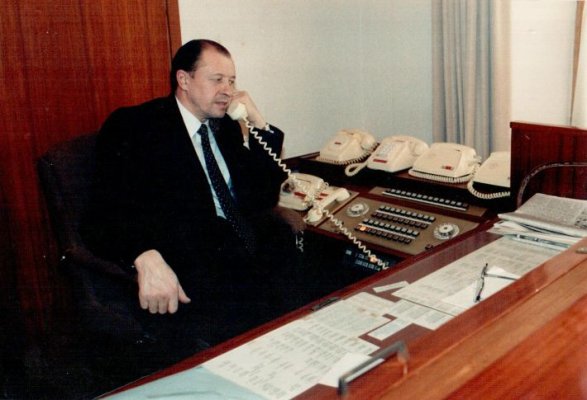 General Medvedev: The Politburo wanted to appoint Aliyev as prime minister, Gorbachev was against it

2023 will mark the 100th anniversary of the birth of the outstanding Azerbaijani, the founder of the Third Republic of Azerbaijan, Heydar Aliyev. The editors of Haqqin News have decided to start a new column – “100 years – a man of an epoch”. The author of the column is the Azerbaijani ambassador to Ukraine, and a well-known publicist, Elmira Akhundova.

Within 20 years, Ms. Akhundova has carried out titanic work in many cities of the former USSR, meeting and talking with hundreds of well-known state, political and public figures who knew Heydar Aliyev personally and worked with him for decades. Elmira Akhundova can be called the author of an encyclopedia about Heydar Aliyev, as these conversations were included in the author’s numerous priceless books. But the publicist wasn’t able, due to many restrictions, to include all the conversations in her works. There are many unpublished interviews left.

In the column dedicated to the centenary of Heydar Aliyev, we will present to the readers the invaluable historical material collected by Akhundova. After all, many of the publicist’s interviewees have long since retired or passed away.

Today Haqqin News presents a conversation with 85-year-old Vladimir Timofeevich Medvedev, a Soviet figure in the special services, a major general of the KGB, the head of security of L.I. Brezhnev and M.S. Gorbachev.

– In the 1970s, Brezhnev often came to Azerbaijan. What was it: his special attitude towards Aliyev or just love for the Muslim republics?

– I think that he treated Aliyev well.

– And when did he single him out among everyone? It didn’t happen right away, did it?

– I don’t know how Brezhnev treated him before Aliyev became the first secretary, but when we came here with him in 1970 when Aliyev was already the first secretary, he made a good impression even on me. He showed himself to be a real person, he knew everything, from the operational situation to the situation around Azerbaijan. And what is surprising – he knew both the economy and everything that generally concerns Azerbaijan. Therefore, after finishing the conversation with Aliyev, Leonid Ilyich was walking back to his room, saying: “That’s the kind of person we found.” This was his first impression.

– I do not know. But there is an interesting point here. If you follow all these processes, you can see that Leonid Ilyich treated Heydar Alievich well. What happened after Leonid Ilyich? How did Gorbachev treat him? They could not work together in the Politburo.

What happened? When Politburo wanted to appoint Aliyev as prime minister under Chernenko, Gorbachev was against it. I was interested in this very serious and main idea – Leonid Ilyich treated Heydar Alievich very well, and under pressure from Gorbachev, Aliyev was forced to leave. And what happened during that Gorbachev period? Failure. Because two bears could not live in the same den.

– Gorbachev simply did not want to see bright and interesting personalities nearby. Aliyev had such a powerful energy that next to him no one could compete. So, the rapprochement between Brezhnev and Aliyev began with the first visit of Leonid Ilyich to Baku. Aliyev used this friendship for the benefit of the republic. 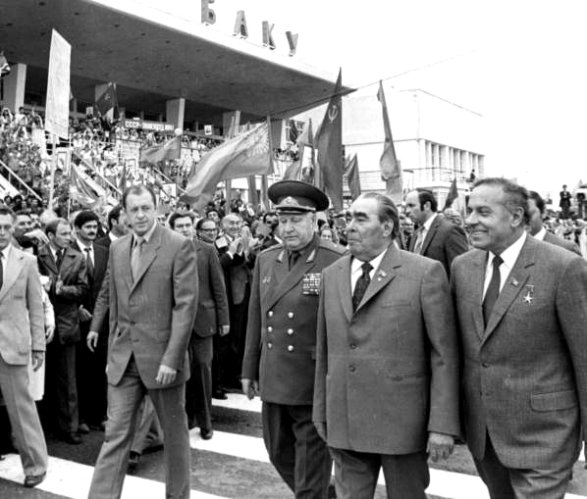 – Arriving in Moscow, he always came with his wife to the dacha in Zarechye-6 to Leonid Ilyich. He visited in the evenings. His working visits were always to the Kremlin.

Leonid Ilyich greeted Aliyev and his wife very warmly. Because when we were in Azerbaijan, Aliyev introduced us to his family, at that time still young Ilham, his daughter. I think we went to the theater together – I don’t remember, either to the Philharmonic or to the opera. And the relationship was just great. They went beyond the official.

– With Rashidov, it was not like he was coming to the dacha. And there was no such relationship with Shevardnadze. It was evident that Brezhnev had a very good attitude towards Aliyev, purely as a human being. He felt in him an energetic person. He had great respect for people who knew the situation in their country, and who knew the situation professionally.

During the time of Heydar Alievich, viticulture rose so much in Azerbaijan! He constantly reported on this when we arrived, and Leonid Ilyich was very delighted. And cotton began to be sown.

– But Gorbachev cut down viticulture in Azerbaijan with his “dry law”. In the literal and figurative sense of the word.

– It was very unfortunate. To put it mildly.

– Do you remember any assessments of Aliyev’s period of rule?

– Brezhnev, after a conversation with Aliyev, always noted that he was a person who could be relied upon.

– Why do you think in their speeches neither Leonid Ilyich himself nor any of the other leaders of the Politburo expressed support for the fight that Heydar Aliyev waged against corruption? How did Brezhnev feel about what was happening in Azerbaijan?

I don’t think he knew what was going on here. Think about it this way, Andropov reports to him regarding Medunov. Brezhnev says: “So what? And what will we do?” “We will arrest him,” says Andropov. “What are you talking about? The first secretary of the regional committee? If he knew the scale of what was happening in Azerbaijan, then maybe Brezhnev would have told him something.

– So, only Andropov stood behind Aliev? Was he the patron of all these affairs?

– Brezhnev knew only what Andropov reported to him. What Andropov did not report, Brezhnev did not know. And Andropov could sometimes not report on everything. Just so as not to upset Leonid Ilyich.

– That is, Aliyev could act independently in such large-scale things?

– Could. And Shevardnadze could. And everyone else could and did.

– Were there people in the apparatus of the Politburo who could or would like to oppose the fight against corruption? 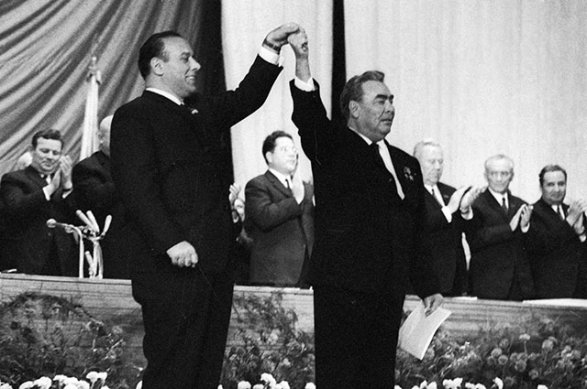 – I didn’t know such people.

– Was there an agreement between Aliyev and Brezhnev that Aliyev would move to work in Moscow?

– Brezhnev wanted to take him, and Andropov recommended it. It was Brezhnev’s move. There was talk of appointing him a prime minister.

– In what year was Tikhonov appointed prime minister?

– Why did Andropov choose him as First Deputy Prime Minister? Maybe there was some kind of long-range sight in this too?

– Of course. He would have made him chairman of the Council of Ministers. He wanted Aliyev to be up to date on everything throughout the Union. Now they write a lot, they say, Andropov was preparing coups. It’s all so stupid. Yuri Vladimirovich always treated Leonid Ilyich very well. This nonsense is written by people who do not know the situation at all.

– Could you please tell us about what happened when Brezhnev mixed up the pages of his speech in Baku, and Aliyev brought him the necessary pages to the podium?

– I think that his assistants mistakenly gave him the wrong text, but maybe it was our general Revenko. But I think it was an assistant. How it was done: one copy of the report was given to Leonid Ilyich, and the assistant had the other …

One page was missing. There was a report, but without that one page, the context is wrong. After all, it was discussed: why, and how it happened. The page was missing. And Brezhnev himself realized that something was not right, because he was reading about one thing, and suddenly another text is coming. He himself stopped, asked: “What’s the matter?” and shouted: “Revenko! What did you give me?” And he immediately ran up to Alexandrov, and Alexandrov went up to Brezhnev.

– In any case, Heydar Alievich saved the situation, although it was very risky on his part. Who could have predicted Brezhnev’s reaction? This is a live broadcast to the whole world. Here the decisiveness of the first secretary of the Central Committee played an important role. He understood that if Brezhnev continued to read, he could make some classified information public. In the speech for the members of the Bureau, it was probably also about the shortcomings, there were some direct instructions. Therefore, of course, the text had to be taken away.

– To be honest, the situation was not pleasant. 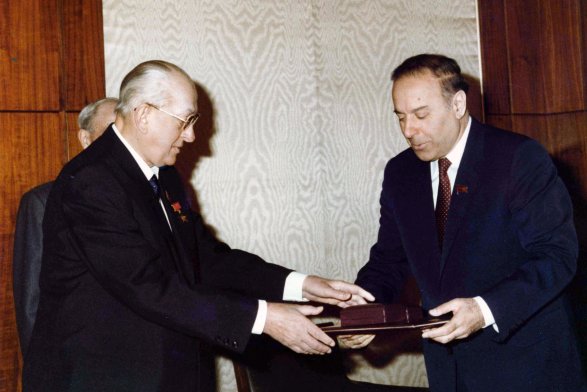 – In the Moscow press, after the resignation of Heydar Aliyev, the issue of the diamond, which Aliyev allegedly presented to Brezhnev, was discussed a lot.

– It is nonsense. Brezhnev never wore rings with stones. And he showed us this signet – “Look at the kind of signet was gifted to me.” It was engraved with “L.I.” He never wore stones in his life. He flew with this seal to Baku. This is not Aliyev’s gift. There were gifts, but not like that. And then – a gift – this is a purely human attitude.

– Yakovlev told me that Aliyev did not fit into Moscow life.

– Yes. He came to Moscow, where he had no acquaintances. In addition, many envied his proximity to Brezhnev, and Andropov. Envied and feared.

– Or maybe because he was of a different nationality?

– No, then the question of nationality was not raised. He was evaluated as a Brezhnev nominee. After all, who was in the Politburo from the republics? Nobody. Only Aliyev. Therefore, he was a stranger to them.

– Although the ministers respected him very much.

– He visited Leonid Ilyich. Others didn’t get to visit. Even the Moscow workers. But the information was spreading. “He’s there again!”

After all, they focused not on intelligence, knowledge, and so on, but on such things …

At all holidays, celebrations – say, a birthday or some kind of holiday, where Brezhnev invited us, Heydar Alievich was also given the floor. Everyone smiled: “Well, now let’s listen to the Caucasian toast.” He spoke very beautifully, purely in a Caucasian way…