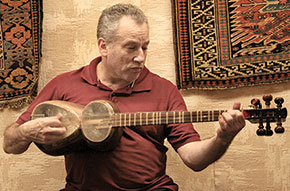 Gets to Grips with Mugham

Musician Jeffrey Werbock is an accomplished player of traditional Azerbaijani instruments, the tar, kamancha and oud. Based in the USA, he is chairman of the Mugham Society of America (MSA). As a teacher, lecturer and author, he has travelled extensively in the USA, Europe, Israel and Azerbaijan, performing the music and promoting its culture. Here, he teaches us to train our ears and tune in to the seemingly wrong notes, random structure and at times intense wailing sound of mugham.

The melodies of mugham are not particularly ‘melodic’, as it were. Mugham melodies are mostly composed of a series of tones that run up and down the scale. Although there may be passages where the melody skips adjacent notes and loops around, primarily the sequence of tones rises and falls in a manner known as staircase composition.

Staircase melodies instantly convey a strong sense of transportation, in a way that melodies that jump around the scale do not. The magical feeling of being transported by a musical scale is an integral part of the overall effect of mugham. The melodies composed by such rules take advantage of this strange and inexplicable phenomenon.

However, staircase melodies soon grow dull to listen to. So, we create intricate phrasing in a continuous stream of intriguing asymmetries, one flowing into the other. This is the key to keeping the audience suspended in a state of heightened listening.

In mugham, there is sufficient variety to keep the listener riveted to the sound. This is, in part, in the sequence of tones (notes), but most of all in the phrasing and timing. The algorithm of mugham – the ‘formula’ for stopping and starting, playing and pausing – is delivered best when supported by voice.

The mugham voice is of a particular timbre. It is an eastern sound, conveying the sense of being told a story in classic oriental epic style. The goal is the feeling of being enchanted by an ancient story, of being told some deep and enduring mystery. (The mystery is the musical intervals and the powerful feelings they evoke in us.)

WAS THAT A WRONG NOTE?

One important feature of mugham is the extensive use of microtones. Microtones are all the tones in between the 12 tones (‘black and white notes’) on the piano. Microtones can be painfully dissonant when played in the context of chordal (polyphonic) music, but when used in modal melodies such as mugham, they augment the mystical power and emotional depth of the melody.

However, the musician must be able to convince the listener that the resulting dissonance is intentional. Otherwise, the listener will react to it as a ‘wrong note’, and will not be able to experience the immense feeling in it. It is a great mystery how a melody that includes the intense dissonance of microtonal intervals can have two completely different effects on the listener depending on the intent of the musician.

Although the desire to play mugham belongs to the player, the intent required to play mugham properly does not. It must be passed to the student by his or her teacher, via aural instructions (without relying on written notes), and the traditional musical soundscape of the culture. The mugham student absorbs the intent of mugham musicians in a chain of transmission going back to the remote past.

What is intent, and how can it be expressed in music? In mugham, it is the intent to cast and sustain a definite mood, and the musician’s every musical gesture must serve that purpose. There needs to be a permanent weightiness, what in the Azerbaijani language is termed sanballi. I think we can translate that to gravitas, minus the solemn associations.

Mugham should always be sanballi in delivery, and it seems that this mood, this texture, is the emergent power that mugham casts over us, dependent on the gravitas of sheer intent.

Another important feature of mugham is its metre-free melodies. Metre-free melodies have no time signature, no beat, no regular, steady rhythm. With no steady rhythm to inform the musician when to play a given note, the musician must play the note, be it micro-tonal or macro-tonal, with a refined sense of timing, and the effect of that timing is, like the microtones, a sense of great intent. Music set to a specific rhythm can be simple or complex yet not require any intention to play because the timing of the notes, whenever they occur, is a foregone conclusion. They appear on the grid of predictability. In contrast, truly metre-free music is perennially unpredictable.

Metre-free melodies speed up and slow down all the time, while the deliberately asymmetrical clustering of notes produces a flow of rhythmic irregularities, each requiring a keen vigilance and that steady, strong intent. At the same time, mugham melodies are not random. In the context of the flexible metre-free conditions, mugham melodies proceed in an orderly fashion. They follow the staircase construction and notes are grouped according to that certain definite principle I call the algorithm of mugham. You could say that mugham resembles language, in the sense that its free metre ‘swing’ has a syntax, a meaning that comes from the structure.

Unlike the way language conveys meaning, mugham is pure effect by sound. So, for mugham, it’s the effect that comes from the structure that resembles the syntax of language. More specifically, the syntax of declamatory speech – the favoured way of telling myths and legends in the ancient Caucasus mountain areas.

Often it is asked, is mugham composed or improvised? Mugham is both ‘composed’ in the sense of there being a definite progression of notes on a particular scale of music – even though, strictly speaking, there was no composer per se – and yet highly improvised. Perhaps a better descriptor for that process would be ‘personalised’. Someone familiar with the genre can recognise which mugham is being played from listening to the first few notes. A few more notes on and they may know who is playing it. There are various schools of mugham, with distinctive ideas on how it is to be played, and there can be individualistic approaches as well.

Somewhat similar to jazz’s theme and variation, mugham offers the opportunity to experiment with the development of the melodic line. Not by radically altering the mode or scale but by being flexible with the tonality, by minutely varying the microtones and varying which microtone is emphasised, by varying the tempo of the progression of the melodic line, and by trying anew with the labyrinthine twists and turns that the melody can take. It’s all for the sake of postponing the resolution of the melody for as long as possible, until the suspended yearning for closure has the desired effect on our consciousness.

One more feature of Azerbaijani mugham that should be mentioned is the high density of ornamentation. The grace notes, slides and trills are so ubiquitous throughout mugham that it appears to be an integral part of the music. The dense ornamentation is played in tightly clustered, discrete bursts. The extra energy of the ornaments is released at strategic moments during the development of the melody, serving to further elevate the increasingly intensifying mental state of the listener. As with every other element of mugham, they must be intended.

In order for mugham to have its effect on human consciousness, it must evoke in equal measure the two fundamental emotions of joy and sorrow. Like the anode and cathode of electricity, the power of mugham to elevate and transform the human consciousness from an earthly function to a divine quality comes from the flow of energy between these two polar opposite feelings. When the mugham musician can successfully balance these two primordial forces with his intent, the attentive listener takes off into a realm of pure magic, and when he returns to earth, he cannot believe where he has been.

This article originally appeared in Visions of Azerbaijan on March-April 2015.