Heavy snowfall blanketed Istanbul on Monday and more precipitation and blizzards are expected up until the early hours of Thursday. Officials issued warnings on road safety late Monday, while traffic came to a complete standstill, leaving hundreds stranded on major roads, particularly on the city’s European side. Snowfall was one of the worst in recent memory for the city but for some, the situation has worsened when Istanbul Metropolitan Municipality (IBB) failed to take precautions to keep roads open while the municipality denied it and said they have been constantly working to clear the snow-covered roads.

The snowfall heightened on Monday and all intercity bus services were suspended until 8 a.m. Tuesday, while motorists were strongly advised against departing Thrace for Istanbul. The governorate on Tuesday extended the suspension until 9. a.m. on Wednesday.

All vehicles, except mass transit and those on duty – snow plowers, emergency vehicles, etc. – have been banned from entering traffic until 1 p.m. Tuesday under the orders of the governorate. Disabled and pregnant civil servants were already put on administrative leave in the city. Public offices in Istanbul were ordered to end their shifts at 3:30 p.m. local time due to an expected increase in the snowfall in the evening and related difficulties in transportation, Governor Ali Yerlikaya announced later on Monday. Universities were also shut down for two days. Other schools have already been closed since last week as the semester break began. Also, civil servants in Istanbul, except for security, health, and transportation services, were allowed administrative leave on Tuesday. Meanwhile, shopping malls will shut early at 7:30 p.m. local time, 2 1/2 hours earlier than usual.

In addition, all flights to and from Istanbul Airport were temporarily suspended earlier on the same day due to heavy snowfall in the city, while many other parts of Turkey experienced transportation difficulties due to the bad weather.

Flights at Istanbul Airport, which was Europe’s busiest last year, were paused until 6 p.m. local time (3 p.m. GMT), officials said, with delays expected throughout the night, while national flag carrier Turkish Airlines (THY) also suspended all of its flights until Tuesday morning.

On Tuesday, it was announced that Istanbul Airport’s runways would remain close until 1 p.m. local time. The closure of Istanbul Airport affected flights stretching from the Middle East and Africa to Europe and Asia. 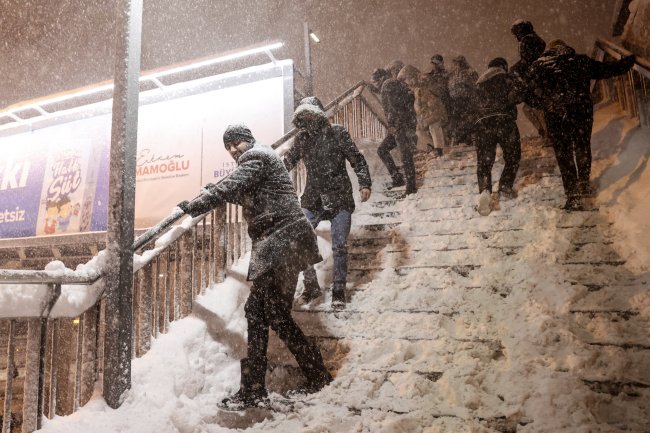 There was no major disruption to traffic in the metropolis early Monday. Main roads and streets were largely open with smooth-flowing traffic while alleys and smaller streets, especially those located on slopes, posed a challenge for drivers, who struggled to keep their vehicles on the road.

Yet, the weather conditions worsened in the evening, especially in remote parts of the European side. Motorists moved inch by inch as traffic almost came to a halt, while Metrobuses – the bus rapid transit system – were the only option for travel in areas without metro services. Some drivers abandoned their cars on the busy E-5 highway stretching across the city and boarded Metrobuses. Metrobuses worked overcapacity, and though they provided a faster transportation option, they were also eventually bogged down by the high numbers of passengers. Others preferred to wait in their vehicles, from Monday evening to the early hours of Tuesday. Traffic moving at a snail’s pace frustrated commuters who had to walk for kilometers to their homes in Beylikdüzü and nearby districts in the absence of mass transit vehicles to the inner parts of the districts from the E-5. Some companies allowed employees to leave early in the afternoon, while commuters working in other companies whose shuttle services operated at normal hours were stuck in traffic for hours.

People stranded on the roads complained of the absence of efforts by IBB, claiming that the municipality’s crews failed to pour salt on the roads to prevent icing and were slow to clear the snowed-in roads. Social media was awash with messages criticizing Mayor Ekrem İmamoğlu.

İmamoğlu did not directly address criticism at a press conference at IBB’s Disaster Coordination Center (AKOM) on Tuesday and instead gave figures about the work. He said the depth of snow reached up to 80 centimeters in some areas and they had more than 133,000 tons of salt to keep roads smooth. “We poured some 54,000 tons of salt and about 21 tons of chemicals to dissolve the ice over the past four days,” he said. The mayor said they were coordinating with all public agencies to minimize snow-related problems in Turkey’s most crowded city.

He said the snowfall was unprecedented but they aimed to reopen all snowed-in roads across the city, acknowledging that the situation in Arnavutköy district, where people were still trapped in their vehicles was dire but they were working to tow away the vehicles and reopen the roads. The mayor warned that snowfall, which was less dense and at times absent during the day on Tuesday would heighten again on Tuesday evening, warning people to heed the statements of authorities for measures.

On Tuesday morning, commuters scrambled to find transportation to work due to a ban on vehicles, while some areas were still inaccessible for buses, forcing people to walk again for kilometers to access public modes of transport. 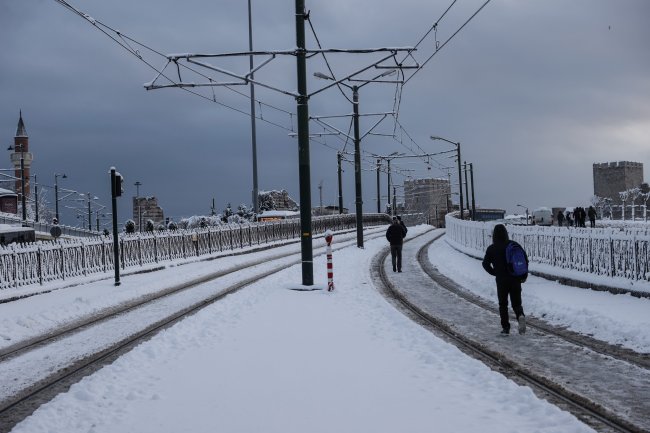 It was announced later that all Istanbul-bound traffic from other cities has been halted due to the snowstorm. Vehicles will have to remain in neighboring provinces until further notice, Turkey’s General Directorate of Highways said.

Authorities said on Tuesday that 5,057 people stranded on the roads were evacuated, and 3,180 among them were taken to hotels, guest houses, and dormitories where they spent Monday night. Local municipalities and nongovernmental organizations (NGOs) distributed tea, soup, water, and food to stranded people on the roads. The governorate also advised the motorists stuck in traffic to take shelter in 71 mosques along the routes.

Turkey’s western and northern regions continue to grapple with dense snowfall that descended over the weekend in a spell of bad weather that has been battering other parts of the country since last week. Tucking regions in under a blanket of white, the snowfall and blizzards disrupted intercity travel.

This report originally appeared in Daily Sabah on 24 Jan 2022.