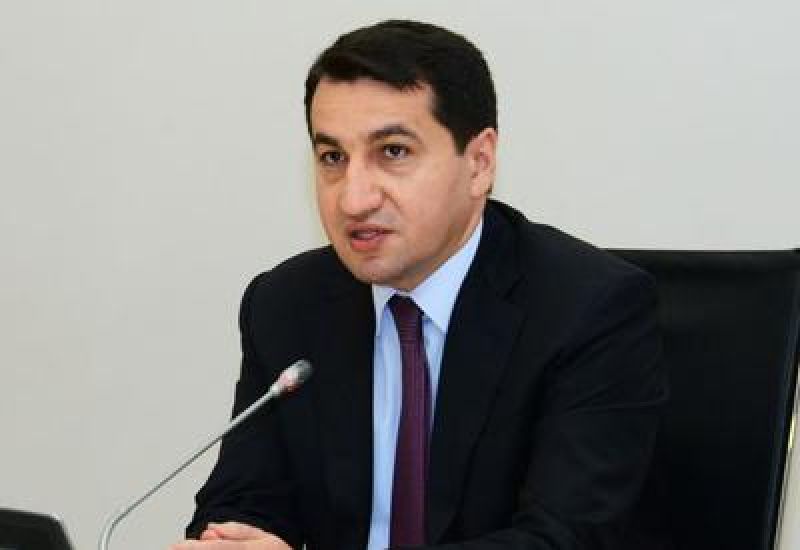 Hikmet Hajiyev: “French Senate Resolution Is No More Than a Piece Of Paper”

According to ‘Azerbaijan in Focus’, quoting Turan News, Hikmet Hajiyev, aide to the Azerbaijani President and Head of the Foreign Policy Department of the Azerbaijani Presidential Administration, has described the French Senate resolution regarding the recognition of the illegal Armenian regime in Nagorno-Karabakh as “nothing more than a piece of paper”. This resolution was adopted by the French Senate on November 25.

Mr Hajiyev recognised: “This step, taken on the basis of narrow political ambitions, in addition to a gross violation of international law, the UN Charter and the relevant UN Security Council resolutions, raises serious questions on the intention and objectivity of France as an OSCE Minsk Group Co-chair and permanent member of the UN Security Council.” He describes this provocative decision by the Senate as a manifestation of the traditional pro-Armenian sympathies of French political circles.

He continued: “Forgetting that any mediating country should be neutral and fair, France openly took a pro-Armenian position, and this was one of the main obstacles to a peaceful settlement of the conflict and compliance with the norms and principles of international law. It was this support that encouraged the aggressor Armenia to maintain the status quo and maintain its occupation.”

Mr Hajiyev commented that the French Senate has remained silent for nearly 30 years regarding the occupation of the internationally-recognised territories of Azerbaijan, namely Nagorno-Karabakh and the seven surrounding regions; the killing of civilians; ethnic cleansing; environmental terrorism; illegal settlements and unlawful economic activity on Azerbaijani lands.

He continued: “We categorically reject the false accusations and slander against Azerbaijan and brotherly Turkey contained in the text of the resolution, and strongly condemn any attempts to distort the historical, political and legal aspects of the conflict.” Allegations that Turkey and Azerbaijan allegedly recruited foreign mercenaries for military operations are unfounded.

Mr Hajiyev explained that French citizens participated in hostilities on the territory of Azerbaijan amongst the ranks of the Armenian armed forces and that the French authorities were subsequently informed.  He explained: “We see the resolution as indicative of growing Islamophobia in France. Discrimination against and persecution of Muslims in France under the guise of extreme secularism and freedom of the press reminds us of the anti-Semitism that once ruled the country and continues to this day.”

He claimed that the French Senate deliberately refrained from condemning Armenian military provocations against civilians, civilian objects, energy and transport infrastructure, both near and far from the conflict zone over 44 days. Armenian aggression claimed the lives of a large number of civilians in Azerbaijan during the extensive bombing of cities and villages.

He concluded that the pro-Armenian French political circles must understand that Azerbaijan has waged a war against foreign occupying forces on its internationally-recognised territory. It is incorrect for any entity to regard Azerbaijan as the aggressor and demand the withdrawal of Azerbaijani troops.

A tripartite statement signed by the Presidents of Azerbaijan and Russia and the Armenian Prime Minister on November 9, 2020 resulted in a ceasefire in the reignited conflict. Mr Hajiyev continued: “Unfortunately, France, one of the Co-chairs of the OSCE Minsk Group, is paradoxically trying to violate this agreement and ignite the conflict. The recent hypocritical policy of France towards our country in a number of international organisations raises serious concerns and questions from the Azerbaijani side.

“We consider the adoption of this resolution to a very shameful step for French politics. The French government should declare its official position on the inadmissibility of such provocative steps and express its support for the territorial integrity of Azerbaijan, making a statement condemning the resolution.”