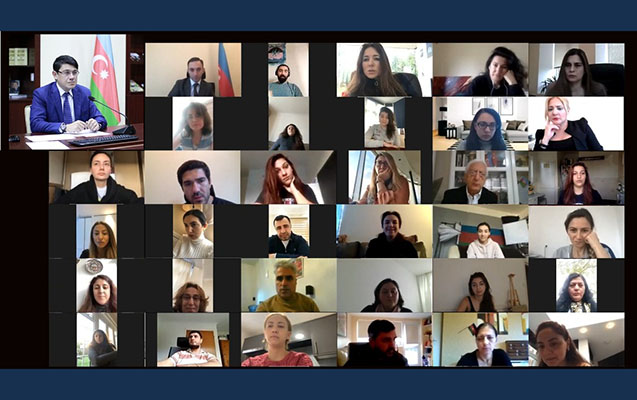 Fuad Muradov, Chairman, Azerbaijani State Committee for Work with the Diaspora, congratulated the participants of the meeting on the victorious conclusion to the Armenian–Azerbaijani Nagorno-Karabakh conflict. He continued: “This great victory, achieved due to the courage of our Glorious Army, and particularly the determination of the President of Azerbaijan, Supreme Commander-in-Chief Ilham Aliyev, adds a new tone to the activities of Azerbaijanis around the world.

‘Following this, the activities of our diaspora will become more focused on the protection of the national interests of Azerbaijan and highlight promotion of the rich cultural heritage of Karabakh. Representatives of the diaspora should make enhanced efforts to establish broader ties with the public of the countries where they live, especially the media, and support our state.”

Farida Panahova, Head of the British–Azerbaijani Society, congratulated everyone on the historic victory of Azerbaijan, revealing that an international web portal for Azerbaijanis has been established and is currently being developed and expanded.