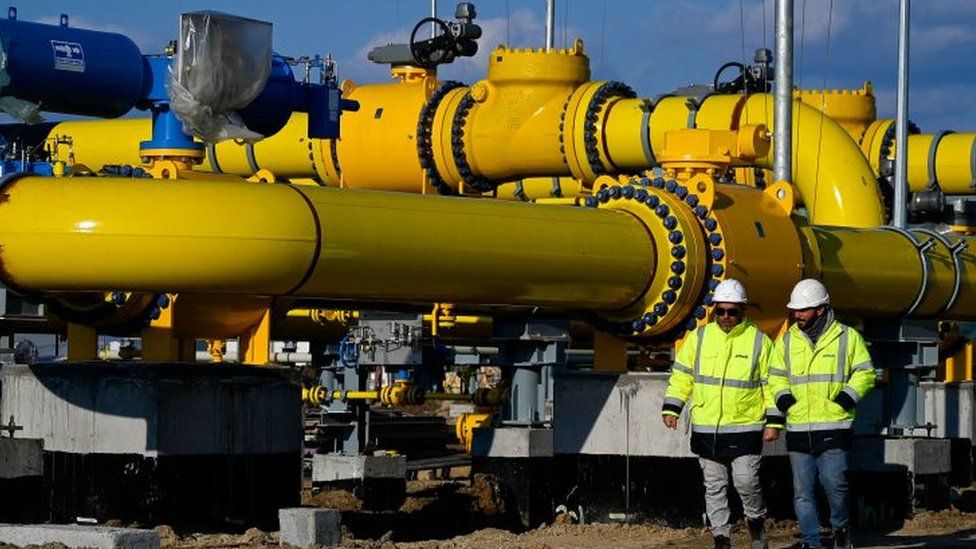 How reliant is the world on Russia for oil and gas?

Russia says it is no longer supplying gas to Poland and Bulgaria after the countries refused to pay for their supplies in roubles.

The EU has said it considers the move to be a form of blackmail.

How has Russia halted gas flows?

Despite the invasion of Ukraine, Russia has continued to supply a large amount of gas to many European countries.

However, after Western powers placed financial sanctions on Russia, President Putin announced that “unfriendly” countries would have to pay for gas in the Russian currency.

The Russian state-owned energy company Gazprom says it has cut off supplies to Poland and Bulgaria and will not restart these until payments are made in roubles.

Payments in roubles would shore up the Russian currency and benefit its economy.

EU Commission president Ursula von der Leyen warned that complying with Russian demands would breach EU sanctions and would be a “high risk” for companies that did so.

Gas companies in some EU countries, including Germany, Hungary and Slovakia, have agreed to pay for gas in euros through the Russian bank Gazprombank, which will then convert the payments into roubles.

The Financial Times has reported that gas companies in Austria and Italy are also planning to open accounts with Gazprombank.

The EU said last week that if buyers of Russian gas could complete payments in euros and get confirmation of this before any conversion into roubles took place, that would not breach sanctions.

However there are different views among countries on how to interpret its initial guidance, and EU diplomats have said they want more clarity on the issue.

If Russian gas supplies to Europe dried up, Italy and Germany would be especially vulnerable as they import the most gas. 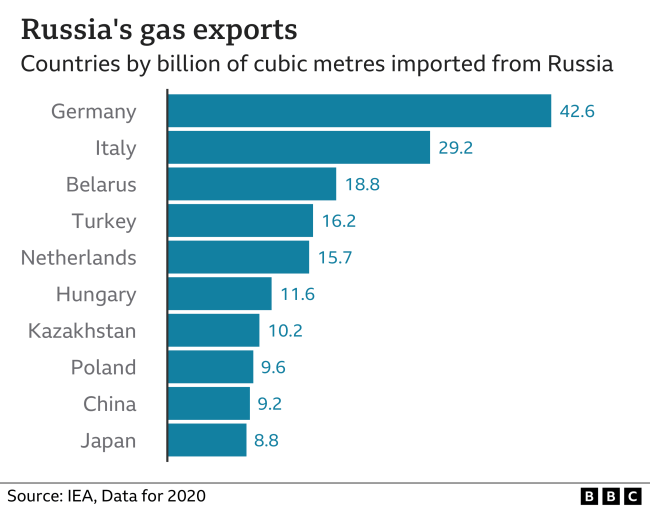 Russia only provides about 5% of the UK’s gas supplies, and the US does not import any Russian gas.

Russia sends gas to Europe through several main pipelines. The gas is collected in regional storage hubs and then distributed across the continent. 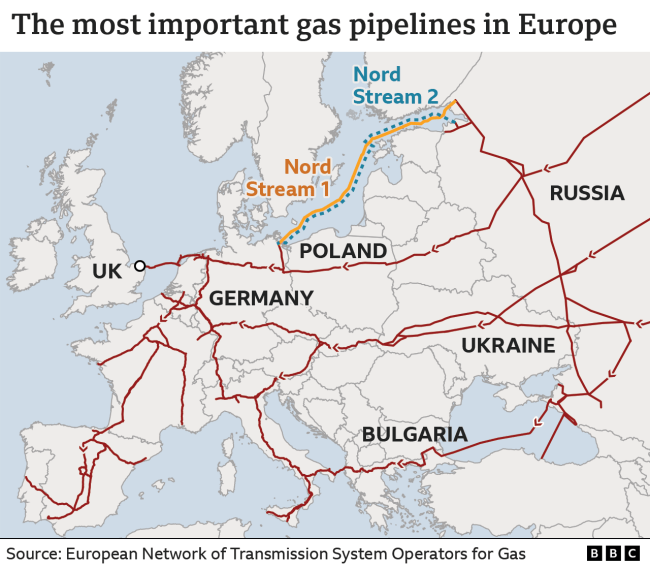 Poland’s gas storage is around 76% full, but Bulgaria’s sits around 17%.

“This is not a short-term issue, the problem will be next winter, so it is key to replenish storage,” says energy policy research analyst Simone Tagliapietra.

What are the alternatives to Russian gas?

Bulgaria says it is looking to increase gas imports from Azerbaijan, as well as make deals with Turkey and Greece.

Poland’s deputy foreign minister told the BBC there were “options to get the gas from other partners,” including the US and Gulf nations.

Europe could turn to the existing gas exporters such Qatar, Algeria or Nigeria, but there are practical obstacles to expanding production quickly.

The US has agreed to ship an additional 15 billion cubic metres of liquified natural gas (LNG) to Europe by the end of this year. 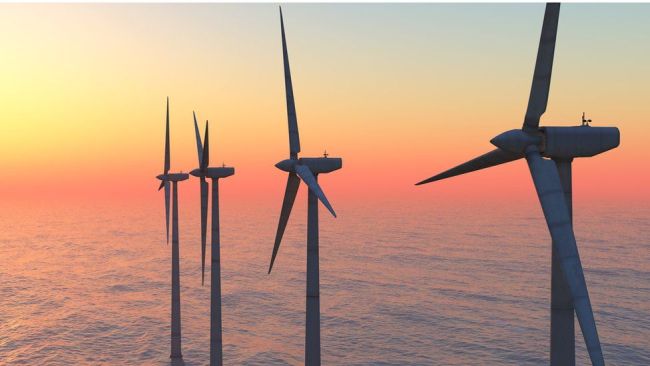 Europe could also increase its use of other energy sources, but doing so is not quick or easy.

The EU has proposed a plan to make Europe independent from Russian fossil fuels before 2030 – including measures to diversify gas supplies and replace gas in heating and power generation.

What sanctions are there on Russian oil and gas?

The US has declared a complete ban on Russian oil, gas and coal imports.

The UK is to phase out Russian oil by the end of the year and the EU is reducing gas imports by two-thirds.

Russia has warned banning its oil would lead to “catastrophic consequences for the global market”.

Despite sanctions, since the start of the war, Russia has almost doubled its earnings from selling fossil fuels to the EU, according to the Centre for Research on Energy and Clean Air, as oil and gas prices have soared.

How much oil does Russia export?

Russia is the world’s third-biggest producer, after the US and Saudi Arabia. 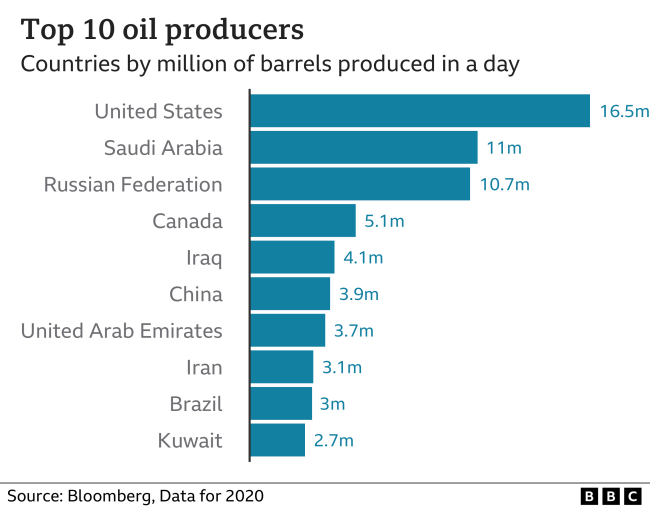 Of about five million barrels of crude oil it exports each day, more than half went to Europe, before sanctions were announced.

Russian imports accounted for 8% of total UK oil demand and 3% of US demand.

What about alternative oil supplies?

Research analyst Ben McWilliams says it should be easier to find alternative suppliers for oil than for gas, because while some comes from Russia, “there’s also a lot of shipments from elsewhere”.

Some IEA members have released the equivalent of 120 million barrels from oil stocks – the largest stock release in its history.

US President Joe Biden ordered a major release of oil from America’s reserves in an effort to bring down high fuel costs.

The US also wants Saudi Arabia to increase its oil production and is looking at relaxing sanctions on Venezuela’s oil.

What will happen to my heating and fuel bills?

In the UK, household energy bills have been kept in check by an energy price cap.

But bills rose £700 to about £2,000 in April when the cap was increased. They are expected to reach about £3,000 when the cap is increased again this autumn.

UK petrol and diesel prices have also soared, and the government has announced a cut in fuel duty as motorists struggle with record prices.

This report originally appeared on BBC News on 28 April 2022.