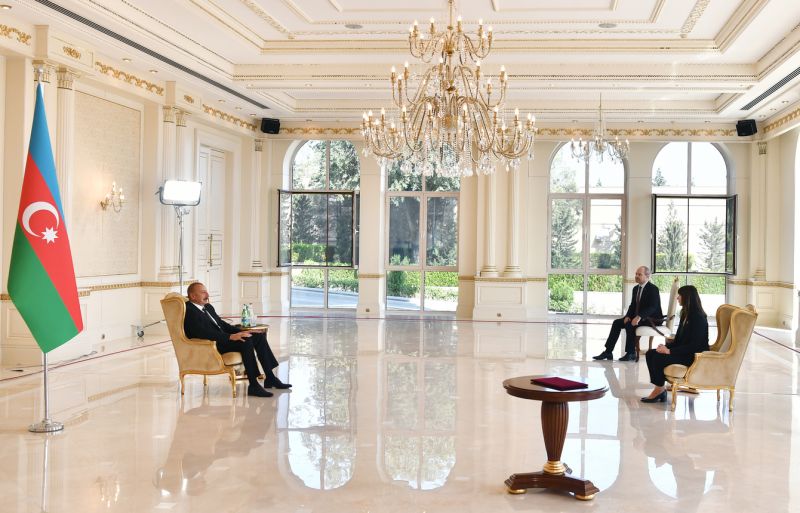 Ilham Aliyev: Armenia hinders the visit of the UNESCO mission to the region

Welcoming the guest, Aliyev noted that four UN Security Council resolutions adopted in 1993 demanding the immediate and complete withdrawal of Armenian troops from the internationally recognized territories of Azerbaijan were not implemented. This is despite the fact that three out of five permanent members of the UN Security Council are co-chairs of the OSCE Minsk Group.

“However, in 28 years the Minsk Group has missed many opportunities. Many times I raised the issue of imposing sanctions against Armenia, hoping that this could prevent war, because we wanted to resolve the issue peacefully,” Aliyev said.

If the sanctions were applied, then the Second Karabakh War could have been avoided. “Therefore, the responsibility for the war lies not only with Armenia but also with those who cannot or do not want to force it to comply with the norms of international law.

“Therefore, Azerbaijan itself complied with all these UN Security Council resolutions. We restored justice and the norms of international law and we acted in accordance with Article 51 of the UN Charter, which recognizes the country’s right to self-defence,” Aliyev said.

“Now that the war is over, the conflict has been resolved, there is nothing more to talk about. Now we need to look to the future, and our main task is to rebuild the destroyed areas. Of course, we hope for further cooperation with the UN on these issues, on the humanitarian situation, we need more interaction with UN institutions,” Aliyev continued.

He also drew attention to the fact that several years ago Azerbaijan invited UNESCO to come and see what is happening in the occupied territories. “We asked UNESCO to assess the damage caused to our historical monuments by the Armenian invaders, but they refused. UNESCO representatives said that UNESCO does not interfere in political affairs. However, after the war, we received signals from UNESCO that they want to come,” Aliyev said.

Azerbaijan agreed to the visit of the UNESCO mission. “According to the latest information, the mission has already been formed, but now Armenia is protesting. Therefore, the mission is still postponed,” Aliyev said.

Azerbaijan also maintains contacts with the UN High Commissioner for Refugees. “We plan to return all former IDPs to the liberated territories as soon as possible. However, the main problem is complete devastation and mines. “Our main goal is, together with the UN and its structures, to achieve the restoration of the liberated lands. We hope that your office in Baku will actively participate in this,” Aliyev said.

Andreeva expressed the hope that the trilateral statement signed on November 10 would give impetus to the establishment of lasting peace in the region. “In December, we supported your government’s assessments of the needs of the Karabakh region and immediately raised $ 1 million for demining work in six districts. We will continue to support national deminers, as this is a priority,” said the UN Resident Coordinator.

The UN is also working with the World Bank, the European Union and other partners to create a fund to coordinate and support ANAMA and conduct mine clearance to the highest standards. “We are committed to supporting efforts to ensure the safe and dignified return of internally displaced persons to the region. On March 1, we signed a new Framework Document on UN Cooperation with Azerbaijan, setting big tasks for the next five years,” Andreeva continued.

The UN would also like to support government initiatives to build a greener economy and strengthen the capacity of health, social protection, education and justice institutions,” Andreeva said.