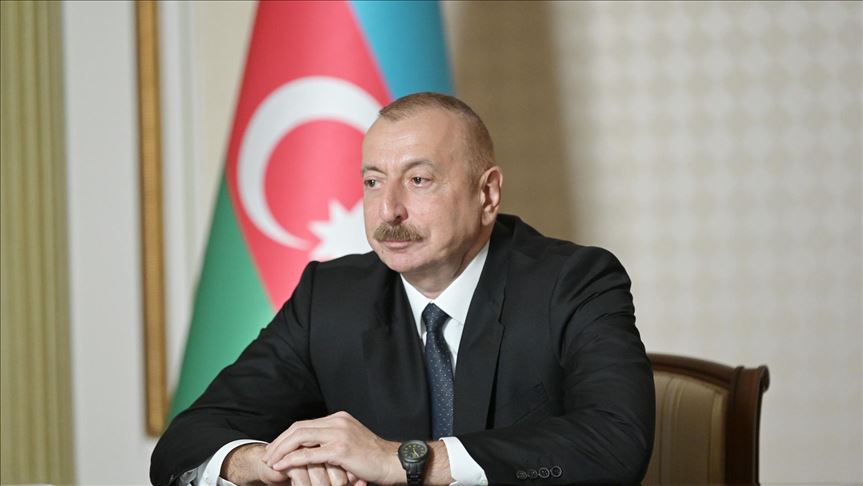 Ilham Aliyev: Armenians of Karabakh began to realize that their future is in Azerbaijan

If the Armenians do not draw the right conclusions, the operation “Retaliation” will be repeated to be even tougher. This was stated by President Ilham Aliyev in an interview with AZTV, according to Azerbaijan in Focus, reporting Turan News.

“We want the Armenian armed formations to leave Karabakh once and for all, and this is Armenia’s commitment,” he said, adding that hundreds of Armenian servicemen have been withdrawn from Karabakh in recent days. If Armenia had drawn the right conclusion from the warnings, there would have been no need for a military operation, he added.

Touching upon the situation in Lachin, Aliyev noted that the return of this city under the control of Azerbaijan is a matter of principle. He stressed that the route of the new road was agreed with the Russian side.

“There were several routes, but in the end, we chose this one. The Russian Defense Ministry has coordinated this route with us at the highest level and approved it. If it were otherwise, how could we build a road on the territory under the temporary control of Russia?”, – stressed Aliyev.

“We were not obliged to coordinate it with Armenia, because it does not concern this country. Armenia was notified at which point there would be an exit to the Armenian border, and they had to bring the new road to this point, but they did not do it to delay time,” he added.

According to Aliyev, Baku also offered to build a section of the road on the territory of Armenia, but Yerevan refused. Baku informed Moscow that it was finishing construction by August 5 and asked to move the posts of peacekeepers. Then the Armenian side announced that it would build its site by the end of 2023.

“It was manipulation, so we announced that on August 5 we would enter the Lachin corridor, create posts and see how you will move. After that, the Armenians living in Karabakh turned to us and repeatedly asked us to give them time until the end of August. And we agreed. At the same time, Armenians living in Karabakh asked us to build a dirt road 4 kilometers to the Armenian border. We agreed to that, too. But, of course, people illegally settled in the city of Lachin, the villages of Zabukh and Sus should be removed…

I have instructed the State Committee for Refugees and Internally Displaced Persons to contact the residents of Lachin, the villages of Sus and Zabukh, and we will soon return them to their homes,” Aliyev said.

Today, there is no question at all about any status in the negotiations. It is about the rights and security of Armenians living in Karabakh and they will be provided by the Azerbaijani state, Aliyev said. As an example, he cited the communication of local Armenians with Azerbaijani builders of a new road. Initially, the peacekeepers were there, but the last 6-7 months have gone because there was no need to protect anyone, Aliyev said.

“Our builders were in contact with the Armenians living there, some of whom even helped, thanked us for building such a high-quality road. There has never been such a high-quality road in the history of not only Karabakh but Armenia as well. So there are already contacts, and this is very important, I also welcome it. Contacts between people will serve long-term peace,” Aliyev stressed.

“Armenians living in Karabakh need to take the right step, to understand that their future passes only through integration into Azerbaijani society. There is no other way. Karabakh is an integral part of Azerbaijan both economically, geographically, transport, and from the point of view of history and international law. If someone in Karabakh is talking about some kind of status, or independence, then you should know that he is the first enemy of the Armenian people, because the Armenians living in Karabakh will have neither status, nor independence, nor any special privileges. Their rights will be protected in the same way as the rights of Azerbaijani citizens, as well as the rights of the peoples living in Azerbaijan,” Ilham Aliyev stressed.