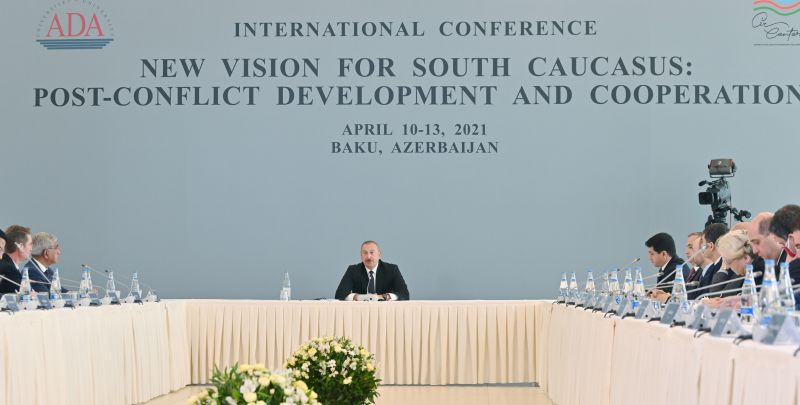 Ilham Aliyev: Azerbaijan Is Awaiting Russia’s Answer To the Question: Where Does Armenia Get “Iskander-M” Missiles

Azerbaijan officially informed the Russian Federation about the shelling of the city of Shusha with “Iskander-M” missiles and provided evidence. However, I did not receive an answer to this, stated President Ilham Aliyev on Tuesday during the conference “New Vision at the South Caucasus: Development and Cooperation in the Post-Conflict Period”, according to Azerbaijan in Focus, reporting Turan News.

“On April 1, during a telephone conversation with Russian President Putin, I raised this issue. We discussed this, although it was not stated in the official announcement. On April 4, the Ministry of Defense of Azerbaijan sent an official letter with photographs, videos and other evidence of the use of “Iskander-M”, but there is still no answer,” the President of Azerbaijan said.

“This is a fundamental question, and Azerbaijan should receive an answer to this from both Russia and Armenia. These are not just some rockets. At the same time, we roughly know where and who launched these missiles and how many. But we are waiting for an official response,” Aliyev stressed.

It should be reminded that on March 31, the Azerbaijan National Agency for Mine Action (ANAMA) announced that on March 15, its experts found fragments of “Iskander-M” missiles on the outskirts of the city of Shusha. The markings on the wreck testify that the “Iskander-M” missile, which Russia has not officially supplied to Armenia, and these missiles are in service only with the Russian Armed Forces.

The “Iskander-M” belongs to the type of medium-range operational-tactical missiles, the use of which was prohibited by the Soviet-American agreements of 1987. Azerbaijani experts believe that the blow was struck on Shusha after the city came under the control of the Azerbaijani Armed Forces in the last days of hostilities – November 9-10, 2020.