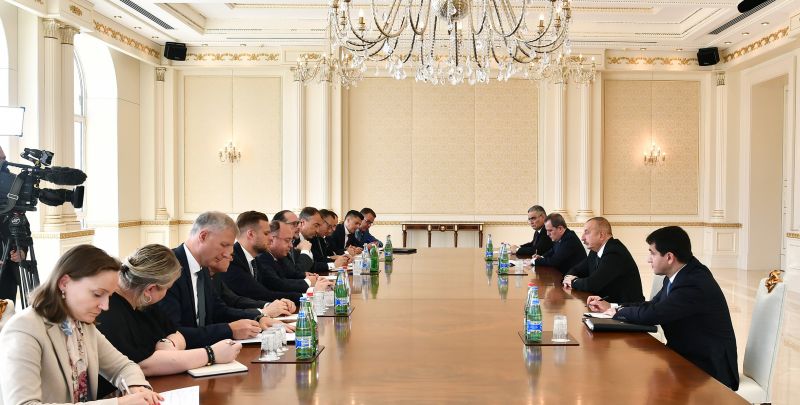 The involvement of the European Union and its members in regional problems is a good indicator, said the president Ilham Aliyev on Friday, receiving the foreign ministers of Romania, Austria, Lithuania and representatives of the European Union. The delegation is making a regional tour of the South Caucasus countries, and it is mandated by the EU representative for security and foreign policy, Joseph Borel.

“The position of Azerbaijan is clear – this is a transition to peaceful development, unfortunately, no such intentions are visible from the Armenian side,” he continued.

Aliyev expressed hope that after the elections there will be positive signals from Armenia. “Without a peace agreement with Armenia, there will be no peace in the entire South Caucasus,” Aliyev said.

He criticized the destructive actions of the Armenian leadership and the position of the OSCE Minsk Group, which did not take real steps for a settlement. Referring to the current situation, Aliyev reiterated that the conflict is resolved and there is nothing more to discuss.

Romanian Foreign Minister Bogdan Aurescu said that the visit of the three foreign ministers, the Special Representative and the staff of the EU Foreign Policy Service is the result of a decision taken in May in Lisbon at a meeting of EU foreign ministers.

At the meeting, it was decided that the EU should more actively participate in resolving this conflict and the problems of this region. If the parties agree, the EU intends to participate in development processes in the post-conflict period,” Aurescu said.

Azerbaijan plays an important role for the EU and is a strategic partner in energy, trade and the largest EU investments in the region come from Azerbaijan. “Speaking about the post-military processes in the region, we would like to hear your opinion. From here, we will go to Yerevan and from there to Tbilisi. What can we do to build confidence, recovery and stability?” he said, adding that the EU welcomes the release of prisoners and the issuance of minefield maps. “We are interested in continuing these processes,” concluded Aurescu.

Austrian Foreign Minister Alexander Schallenberg called the region’s transition to peace processes after the war important. The European Union shows great interest in the economic development of the region and cooperates in this with the OSCE.

Lithuanian Foreign Minister Gabrielius Landsbergis recalled that he visited Baku several months ago and regards the current visit as a continuation of the consultations begun that time.

This article originally appeared in TURAN INFORMASIYA AGENTLIYI on 25 June 2021.