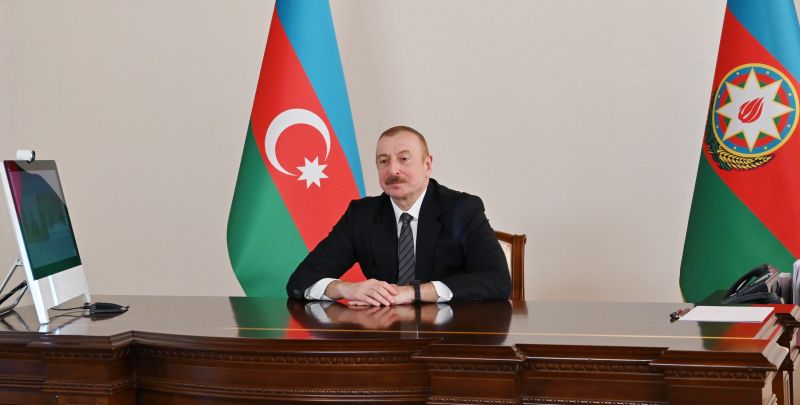 “Azerbaijan highly appreciates the position and support of Pakistan during the 44-day war,” stated the head of state Ilham Aliyev during a video meeting with the chairman of the Joint Chiefs of Staff of Pakistan, General Nadim Raza, who arrived in Baku on a three-day visit, according to Azerbaijan in Focus, reporting Turan News.

“From the first day of the war, Pakistan expressed solidarity with Azerbaijan, demanding the immediate and unconditional liberation of the occupied territories. The people of Azerbaijan appreciated this and during the entire period of hostilities in Azerbaijan, the flags of Pakistan were flown.
Today we state the positive results of the trilateral political, military and other cooperation between Turkey, Azerbaijan and Pakistan. It is necessary to continue these efforts in order to achieve even greater results,” Aliyev said. As for the military cooperation between Baku and Islamabad, this contributes to the establishment of peace in the region, he added.

In response, Nadim Raza congratulated Azerbaijan on the victory in the 44-day war on behalf of the Pakistani Armed Forces and the people of the country. “Your victory was also celebrated in our country, we received constant information and it was widely covered in the Pakistani media,” the general said.

Further, the parties discussed issues of developing cooperation in the military sphere and regional issues.