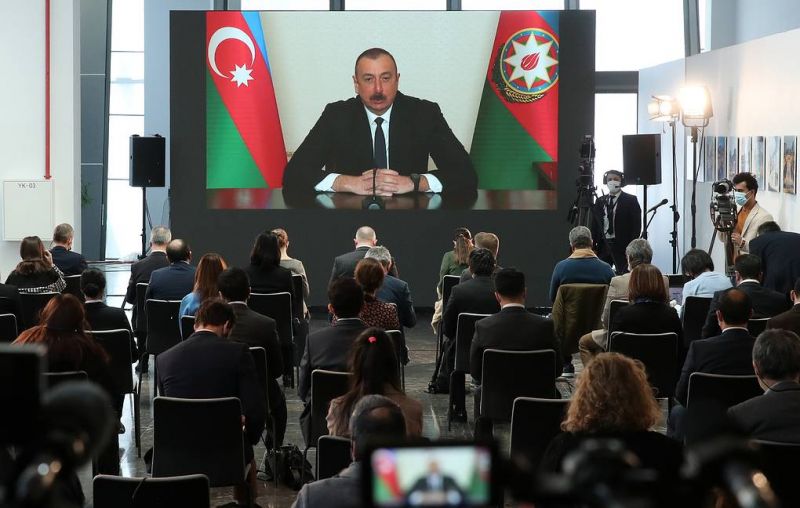 Ilham Aliyev: Karabakh Status Resolved, Iskander Wasn’t Used, Armenians of Karabakh Are Our Citizens, We Will Return to Khojaly

According to Azerbaijan in Focus, reporting Turan News, during a large press conference for foreign journalists on February 26, Ilham Aliyev noted numerous topics.

“The more they held our lands, the worse their situation became, and we always set the goal of bringing Armenia to economic collapse, as they refused to liberate our lands. However, they did not realize this, and the authorities who came to power in 2018 followed the same path.

“The outcome of the war cannot be changed, the agreement on November 10 is being implemented, but there are points that are being discussed. If this does not happen, then Armenia will find itself in an even more difficult situation. Armenians and her foreign patrons must accept the new reality.

“The airport in Fizuli is under construction, the process of clearing the territory from mines is being completed there. The airport will be international, which will accept all types of aircraft. The completion dates are set for this fall. This will allow using it for the restoration of territories and visiting the city of Shusha. Two new highways are under construction from the airport to Shusha.

“There are also plans to build airports in Lachin and Zangilan, which will become an important logistics center. A corridor through Armenia will pass through it, which will connect Azerbaijan with Nakhchivan and Turkey,” Aliyev said, answering a question about the construction of new airports.

The difficulty in reintegrating the liberated territories is that the Armenians do not want to recognize the results of the war. After the conclusion of the armistice in December, an armed detachment was sent from Armenia to Karabakh through Lachin. “At first we were told that they got lost and our military and peacekeepers were trying to get them out of there. However, these units attacked our military and, as a result, four of our military men and one civilian were killed. In retaliation, 60 people were captured. They are not prisoners of war and do not fall into this category.”

“In addition, the Armenians did not and do not want to issue maps of the minefields. This can be seen as a violation of the ceasefire agreement. This hinders the reintegration of territories. Everything is destroyed there. It needs to be restored so that people can return. Meanwhile the clearing from mines is in progress.

“We want a lasting and sustainable peace. We have been striving for this for 30 years, trying to convince the other side to return the territories peacefully. However, realizing that the Armenians would not return a single centimeter of land, adequate steps were taken. If we had not stopped the war on November 10, then Armenia would have found itself in an even more difficult situation.
Sustainable peace requires cooperation and rejection of revanchism. This is beneficial for Armenia itself, and its political circles must realize this. The tension on the border in Zangezur region is artificially inflated by the Armenians. Our border guards control 20 km of the road laid by the Armenians through our territory, but we do not interfere with them. We don’t need anything superfluous,” Aliyev said.

“We want to get people back there as soon as possible. This process has already begun in three villages of Zangilan, this is a pilot project and people should return there by the end of the year. It is more difficult with big cities, 50-70 thousand people will live there, it will require large infrastructure and also a lot of time, effort and resources.”

When asked about the status of Karabakh, Aliyev recalled that he had already said where this status flew (to hell).

“We believe the conflict is over. I have already said where the status of Karabakh is. The less Armenians talk about it, the better for them. Don’t give them false expectations. The status topic is off the agenda. Karabakh is an integral part of Azerbaijan. If someone raises the issue of status today, then they do not contribute to peace, but to confrontation.

“We clearly imagine that Armenians and Azerbaijanis will live side by side peacefully. We have no problems with the Armenians, they are our citizens. There is a long history of cohabitation of two peoples. But these are bilateral relations and they must take reciprocal steps,” Aliyev said.

Referring to the clearance of mines, he said that this work had just begun. Modern equipment for mine clearance was purchased and a new state structure was created. 100 million manats have been allocated for its work this year. Groups of Turkish and Russian sappers are also helping, and negotiations are underway with a number of companies that can carry out this work.

“The Zangezur corridor is a new artery of the region, which is beneficial for all countries in the region. This requires respect for the interests of all parties and a sincere desire. The positions of the leaders of Russia, Turkey, Iran and ours coincide. The Armenians set some conditions, but we will still fulfill all the agreements, and if the Armenians do not want that, they will again be left with nothing,” Aliyev said.

What will happen to Khojaly, is it possible for Armenians and Azerbaijanis to live together in Karabakh?

Answering this question, Aliyev recalled that it is possible. “The sister of the former Minister of Defense of Armenia lives in Azerbaijan. This is an indicator of our attitude towards Armenians.

“The Azerbaijanis will return to the territories that are now under the control of the peacekeepers. It will take time, but it is inevitable. We will return to Khojaly and the Armenians’ attempts to prevent this will only worsen the situation. We will never forget the victims of Khojaly,” Aliyev stressed.

Did Armenians use Iskander missiles during the war?

To this question, Aliyev said the following, “We have not seen these missiles. The check showed that there was no Iskander launch on our territory. A 10% explosion of rockets is a joke. They used Scud and Tochka-U missiles in Ganja. When this happened, I asked President Putin to cool the hotheads in Armenia and urge the Armenians to abandon this, as otherwise we would hit Yerevan and other cities. We could do this not only from Nakhchivan, but also from other places, and our missiles allowed us to do this.

“I suggested that the Russian side take the Iskander missiles out of Armenia in order to prevent such a scenario. Unfortunately, Russia supplied all these weapons to Armenia free of charge, and now the Russian side says that it is ready to modernize the Armenian Armed Forces. But if we are talking about lasting peace, is it worth doing it?” Aliyev said.

To this question, Aliyev noted that the peacekeeping forces are temporarily in Karabakh. “This is not a military base and their mission is temporary. They are working successfully, there are some questions, but on the whole their work is satisfactory. They will be here for 5 years. If we want, their mission will be terminated.”

How will the Lachin corridor work and how will the process of integration of Armenians into the Azerbaijani society go?

“We are ready for any integration with Armenians. Where there are Russian peacekeepers, there is little population. Before the war, there were 60 thousand people. We also knew very well what the situation in Karabakh was before the start of the war and now, who was going there and from where. Therefore, when peacekeepers allow foreigners to enter Karabakh, it is not clear and we demand to stop it.

“As for giving the Russian language the official status in Karabakh, this is the manipulation of the illegal authorities in this region of Azerbaijan. The Armenian language can be used there, as well as the state language of Azerbaijan,” concluded Ilham Aliyev.