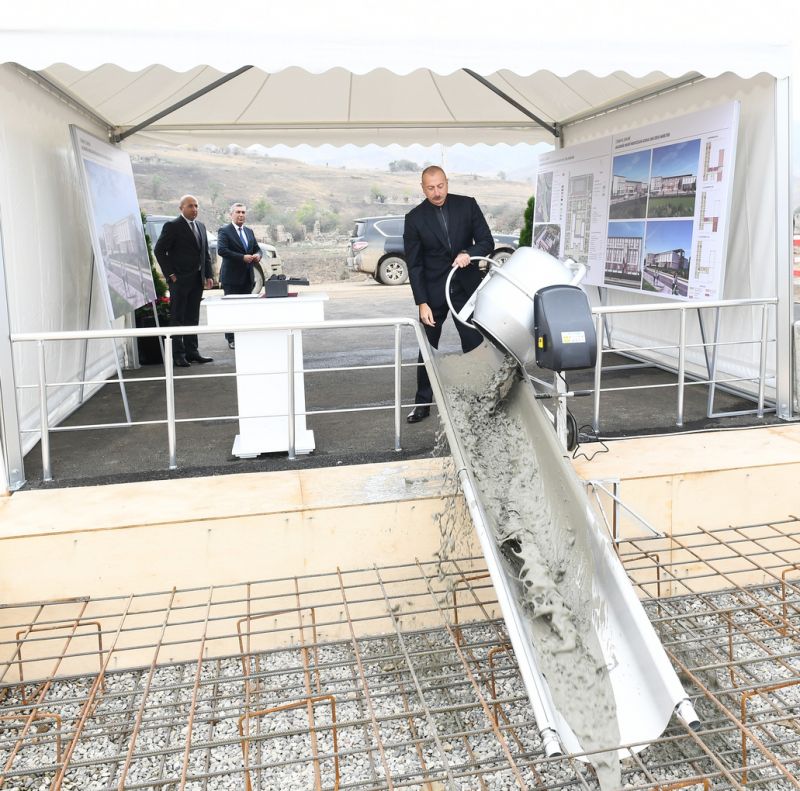 Ilham Aliyev laid the foundation stone for the restoration of Jabrail

Today, President of Azerbaijan Ilham Aliyev is making a trip to the Jabrail region, according to Azerbaijan in Focus, reporting Turan News.

A year ago, on this day, the Azerbaijani army liberated the regional center – the city of Jabrail from the Armenian occupation.
Aliyev laid the foundation for a memorial complex, a hospital, a school and a multi-storey residential building in this regional center. He also launched the construction of an industrial park – “Economic zone of the Araz Valley” in the East Zangezur economic region.

The day before, the head of state visited the Terter and Barda regions of Azerbaijan. During the visit, he opened a new road to the villages of Sugovushan and Talysh in the Terter region, which were also liberated a year ago.

In Sugovushan, Aliyev took part in the opening of the small hydroelectric power stations “Sugovushan-1” and “Sugovushan-2” with a total capacity of 7.8 MW after reconstruction.

“The liberation of these points gave us control over the strategic roads in the area, and the enemy faced great difficulties and restrictions for the movement and maneuvers of manpower,” Aliyev said. The President of Azerbaijan also parried the attack of the ex-President of Armenia Serzh Sargsyan that only Nikol Pashinyan was the culprit of Armenia’s defeat.

Aliyev called the ex-president of Armenia “Serzhik”, indicating that the archival data testifying that this was his name, and only then he became “Serzh Sargsyan”. “I am in Sugovushan, and if Serzhik has enough courage, let him come here,” Aliyev said, responding to the attack of the ex-President of Armenia.

In the village of Talysh, Aliyev visited the Albanian-Udi and Russian Orthodox churches destroyed by the Armenians. “Monuments of all religious confessions will be protected from now on. We will also restore this ancient Albanian church. For 30 years, the Armenians have only been destroying this region”.

He also pointed to the destruction of the Russian Orthodox Church. “Look at what condition she is in. We will restore, repair it too. Unlike Armenians, we respect all religious monuments. During the occupation, the Armenians placed barracks in these churches,”Aliyev said.