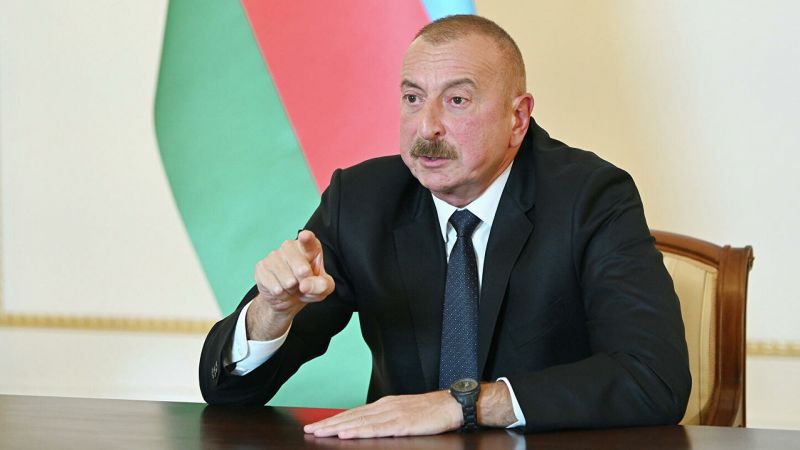 Ilham Aliyev: One must forget about the status of Karabakh

Armenia’s demands on the status of Karabakh are hopeless, the Azerbaijani President said in an interview with the Russian magazine “National Defense”, according to Azerbaijan in Focus, reporting Turan News.

“Unfortunately, the status of Karabakh is still raised which is completely hopeless. I think this is harmful and dangerous for Armenia in its current deplorable state. They should not forget the lessons of the Second Karabakh War,” Aliyev said.

He made it clear that if Armenia continues to put forward territorial claims to Azerbaijan, then Baku will respond in the same way.

In general, why does Armenia, a loser of the war, having signed the act of surrender, consider itself entitled to talk about some kind of status for Karabakh? It is impossible to talk about the status of something that is no longer there.

“There is no Nagorno-Karabakh. There is the Karabakh economic region, there is the East-Zangezur economic region. This is our territory, and only we can determine what administrative units we can have. Only to us, no one else, no other country, especially Armenia,” he stressed.

The President believes that ” this continuing broken record about the status of Karabakh poses a great threat to Armenia.” “And it is better for them not to anger or annoy us, but to agree while our proposal is on the table.

The same thing can happen again, as with the war. We offered Armenia to stop in time. We offered them to leave our occupied territories voluntarily, but they did not agree, and now they are reaping bitter fruits,” he said.

Aliyev believes that the prospects for peace and stability in the South Caucasus mainly depend on the position of the Armenian side. “We have indicated our position. We are ready to start the process of delimitation and demarcation of the state border. We are ready to start working on a peace treaty between Armenia and Azerbaijan. We need it. The war is over, the Nagorno-Karabakh conflict has remained in history forever, ” the head of state said.

The President stressed that a trilateral working group is currently operating at the level of the Deputy Prime Ministers of Russia, Azerbaijan and Armenia. “So the work on the future of the region is underway, although with difficulties. The Armenian side took a time-out for two and a half months. Only on August 17, the working group resumed its activities. We are ready to move forward in terms of normalizing relations, but so far there are no positive signals from the Armenian side,” Aliyev added.