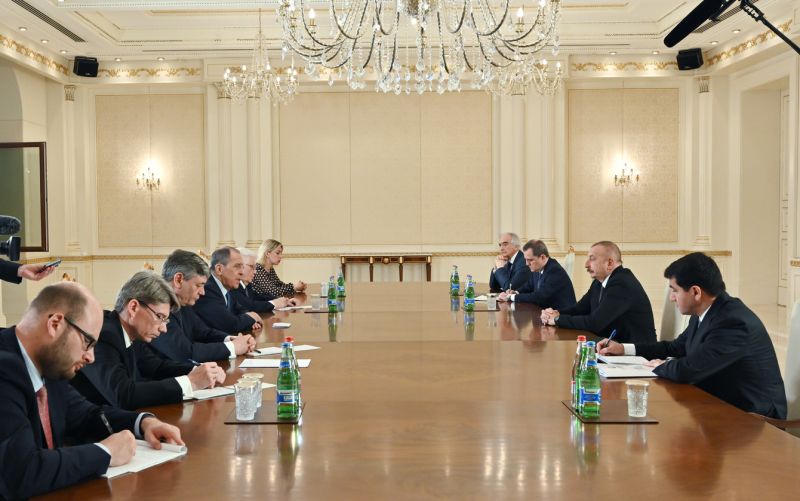 Ilham Aliyev: The Issue of Prisoners of War is Closed and Calls for Revenge are Dangerous for Armenia

The current post-conflict situation dictates the need for closer contacts at all levels, there is a positive development, strengthening of security, minimising the risks of resumption of hostilities and the desire to turn the black page of history. Azerbaijan is ready for this. This was stated by President Ilham Aliyev, during the meeting with Russian Foreign Minister Sergei Lavrov, according to Azerbaijan in Focus, reporting Turan News.

He praised the work of the trilateral commission on the opening of transport corridors, the restoration of railway and road infrastructure.

“A specific deadline has been set, and we will try to meet that deadline so that this project can soon become operational,” Aliyev said.

“Taking into account the humanitarian aspect of the future development of events, we ensure unhindered communication between the settlements of Armenia along the highway, which is located in the liberated territories, more than 20 kilometres of this highway are currently in use by Armenian citizens. And there are no obstacles or difficulties in this. This is also a demonstration of the good will of the Azerbaijani side,” Aliyev continued.

In addition, Azerbaijan has agreed to transport gas from Russia to Armenia through Azerbaijani territory, which is also a goodwill gesture.

Further, Aliyev accused Armenia of trying to talk about revenge and the return of lost territories. “This is very dangerous, and first of all for the Armenian side. The Second Karabakh War showed what this policy of hatred and Azerbaijanophobia led to,” Aliyev said and called on Russia to help normalise the situation.

“We expect that Russia, as our friend, strategic partner, neighbour, as a country whose peacekeepers are currently on the territory of Azerbaijan, will continue to contribute to reducing tension and the predominance of a more sober approach on the part of the Armenian side,” he said.

Sergey Lavrov responded by saying that Russia is committed to the implementation of agreements on the Karabakh settlement within the framework of the 9 November and 11 January statements.

“Our peacekeeping contingent is carrying out the tasks that you have agreed during these contacts with the Russian and Armenian leadership, and we are grateful for the appreciation of the role of our peacekeepers. We will do our best to ensure that everyone assumes that the military aspects are closed. Now we need to deal with the details on the ground. There are issues regarding delimitation, demarcation, not everything is simple, but everything is solvable. It is our belief that military experts with the participation of diplomats can agree on mutually acceptable solutions,” he said.

The Russian Humanitarian Response Centre in Karabakh works with the Azerbaijani Ministry of Emergency Situations to resolve humanitarian issues.

The deputy prime ministers of Russia, Azerbaijan and Armenia regularly work within a working group to unblock all economic and transport communications in the South Caucasus. Opening these communications is in the interests of all the South Caucasus states and their neighbours, which means creating a serious global transport hub , Lavrov continued.

“You mentioned prisoners of war, and prevention of any abuse related to historical heritage, religious heritage – we want to help to solve all this as constructively as possible. And UNESCO, as the organisation responsible for the preservation of international cultural heritage, is interested in participating in these efforts. We are ready to help create the conditions that will make this possible,” Lavrov said.

In conclusion, he added that Russia will strongly encourage its companies to participate in reconstruction works in the liberated territories.