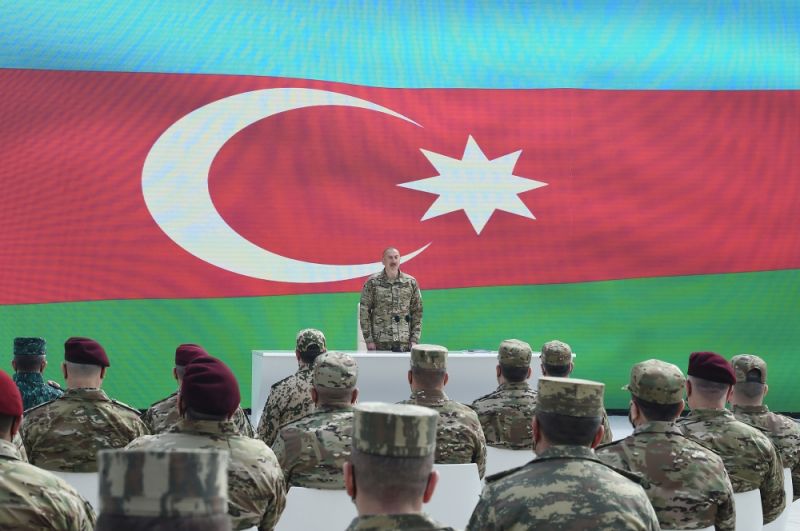 Ilham Aliyev: The mediators wanted to leave the occupied territories to the Armenians

For many years, international mediators, negotiating, deceived us. They sought not to resolve the conflict, but to freeze it. International structures wanted to leave the occupied territories to the Armenians, stated on Monday the head of state Ilham Aliyev, addressing a group of military personnel at the opening ceremony of the Victory Park, according to Azerbaijan in Focus, reporting Turan News.

“Therefore, preparation was carried out simultaneously with the negotiations and we did not hide it,” he said. In order not to depend on one side, weapons were purchased in different places.

“During the war, they wanted to impose sanctions against us. This was wanted by the countries of the Minsk Group. This was prevented by our friendly countries from the Non-Aligned Countries,” Aliyev said.

After the April 2016 war, then-Armenian leader Sargsyan promised to return the occupied territories and asked for two weeks, Aliyev said. However, after that, a police regiment was seized there, motivating Sargsyan to refuse to fulfill his promise, Aliyev said.
After the change of power in Armenia in 2018, Pashinyan also promised to resolve the conflict, asking for time to resolve internal problems, “but the Armenians deceived us again.” It became clear that negotiations are meaningless, Aliyev said.

The course of the Second Karabakh war is known, the liberation of Shusha became the apogee of Azerbaijan’s victory and Armenia surrendered.

“Those who speak about revenge in Armenia today should remember that the iron fist is in place,” Aliyev said and expressed gratitude to the military who ensured the victory, returned a sense of pride and created a new reality. “Today, everyone should reckon with us and will be reckoned with,” Ilham Aliyev said in conclusion.