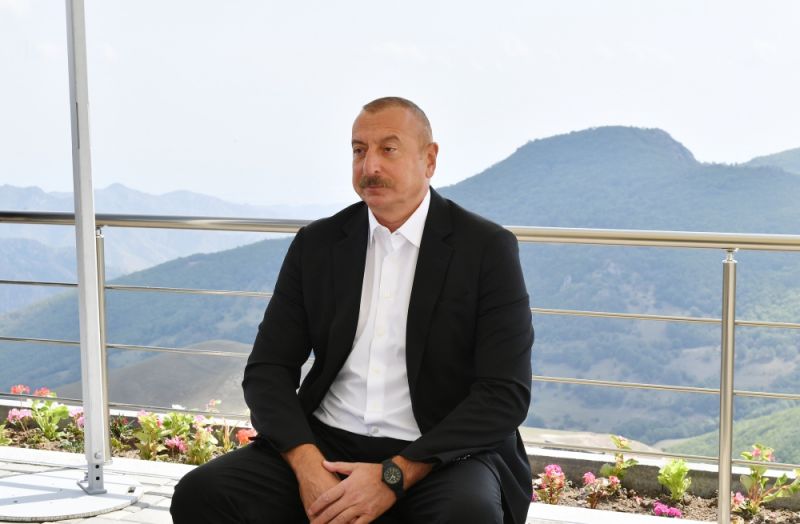 Ilham Aliyev: There is neither status, nor Nagorno Karabakh

President of Azerbaijan Ilham Aliyev has ruled out granting any status to the Armenian population of Karabakh. At the same time, he positively assessed the position of the head of the EU Council, Charles Michel who used no words “status” and “Nagorno-Karabakh”. “There is neither status, nor Nagorno Karabakh,” Aliyev stressed in an interview with the state TV channel AzTV, according to Azerbaijan in Focus, reporting Turan News.

In so doing, he called it illogical to grant a status to a population of 25,000 people.
Besides, Aliyev stressed that Azerbaijan will continue to strengthen its positions on the border with Armenia.

According to him, the issue was discussed during Michel’s visit to Azerbaijan. At the same time, Aliyev expressed disagreement with Michel, who, while at Yerevan, called the border territories “disputed”.

“I tried to explain to him that we have reached our borders. Why in May only? Because the snow had melted. After the snow melted, we seized necessary heights and settled on them; we strengthened there and will continue strengthening,” President of Azerbaijan stressed.

The Head of state called it a” very wise step ” that Michel did not use the words “status”, “Nagorno-Karabakh”. “We appreciate this, and Armenia should make a result out of it. There is no status, no Nagorno – Karabakh,” Aliyev continued.

According to him, if someone likes this name, “they can create the Nagorno-Karabakh region in their country, or they can call one of the districts or the country that way, that’s their business.” “There is no territorial unit called Nagorno – Karabakh in Azerbaijan, and the fact that Charles Michel did not use this expression should be perceived as respect for our position,” Aliyev said.

He also touched upon movements through the Lachin corridor.

In his view, Azerbaijan is conducting daily monitoring of the Lachin corridor and has full information about how many cars pass through it, including foreign ones.

“We said that this should be put to an end, this is our territory. If some people think that we do not see this, they are mistaken. In some cases, Armenian license plates are glued to these cars. But we are there, we are in the corridor, we see everything, both in Khankendi and in the corridor,” Aliyev said.

At the same time, as Aliyev noted, the number of cars leaving is more than those entering, and this is an indicator of the outflow of the population.

According to him, a maximum of 25,000 Armenians currently live in Karabakh. “The real number of people living there is 25,000 people. Other figures are also mentioned, more than 50,000 people returned after the war. It is possible, however, those returned are not necessarily those who stayed there. They came back, and then they left… Where is the logic in creating a status for 25,000 people?”, Aliyev added.