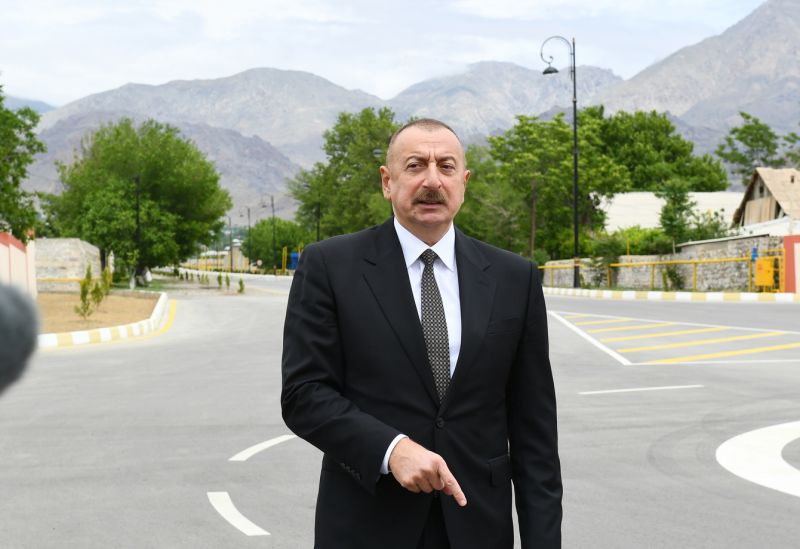 Ilham Aliyev: There is no unit called Nagorno-Karabakh, the revanchists will be brought to their senses

President Ilham Aliyev has made some tough statements on the Karabakh issue during a visit to Nakhchivan today, according to Azerbaijan in Focus, reporting Turan News.

In an interview with state television AZTV he said the Karabakh conflict had been resolved on the battlefield and the issue settled. “There is no administrative unit on the territory of Azerbaijan called Nagorno-Karabakh,” he said.

“If someone thinks that the conflict is not solved, then why was the 10 November document signed? This is not an agreement on an armistice, it is an act of surrender and if anyone is against it, we accept it as a rejection of the 10 November agreement,” Aliyev said.

“Those countries that want to deal with this issue should also take this into account. Let Canada mind its own business and not interfere in our affairs. Maybe Canada thinks it is a superpower, like Luxembourg,” he said, commenting on the Canadian Foreign Ministry’s latest statement on the detained Armenians.

“I reject France’s statement as well. We have repeatedly demanded from Paris not to interfere in our affairs, Go, take care of your own affairs. What’s all this fuss about the Trophy park? There are heads of Algerian resistance leaders on display in the Paris museum, so look in the mirror,” Aliyev said.

“As for the revanchists in Armenia, let them not rely on anyone. If they take any steps, they will be destroyed on the spot and no one will help them. We have both strength and determination, an iron fist in place. Let those who talk about the return of Shusha and Hadrut remember this and do not press their luck,” Aliyev threatened.

“As for the Zangezur corridor, it will be opened. I did not come to Ordubad by chance, it is 60km from here to Minjevan. This section of the railway was destroyed by Armenians, but it will be restored and the two links will be connected,” Aliyev said.

He also touched on the defense capability of the Nakhchivan region, noting the high level of the Independent Combined Armed Forces stationed there.

“This unit is one of the most combat-ready and has the latest types of weapons. The capabilities of this army were demonstrated back in 2018 when vast areas and heights were liberated. From these positions we control Armenia’s communications, and let them not forget about it,” Aliyev concluded.