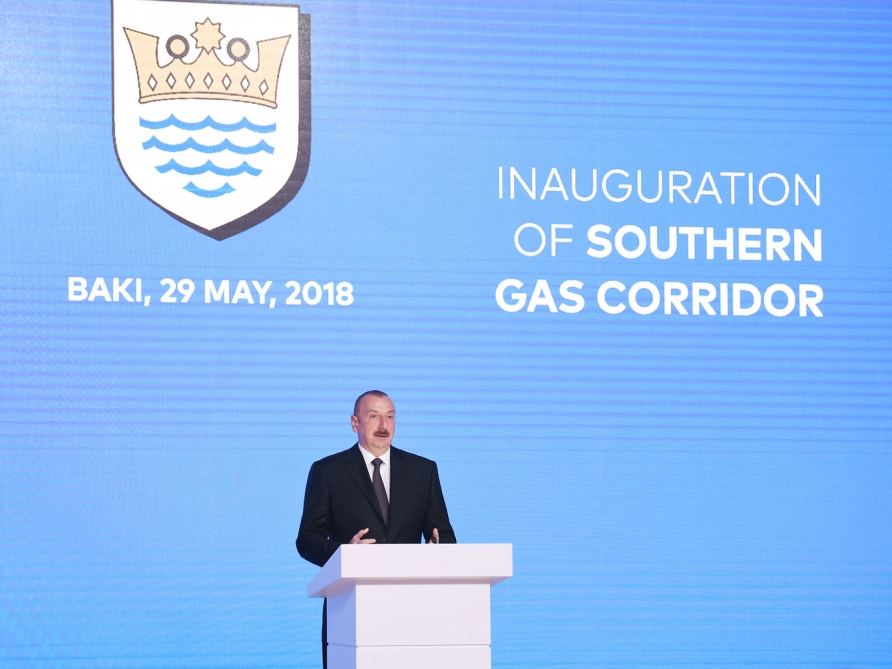 Ilham Aliyev: We Are Creating A New Energy Map of Europe

The European Union is heavily dependent on the import of natural gas. Gas consumption constitutes approximately 21% of the EU’s energy mix, making it the second choice after oil. The magnitude of gas consumption varies among EU member-states. Oil has a diversified portfolio of sources and back-ups, whereas gas tend to be much more dependent on a single supplier and with no substantial back-ups. The EU imports its natural gas mostly via pipelines from three main sources: Russia, Norway and North Africa. In 2017, Russia provided 39.8% of EU imports, followed by Norway (26.2%) and Algeria (10.7%).

Countries in Southeast Europe are supplied with natural gas from Russia in three different directions and three geographical subregions are served by three different sets of gas infrastructure. Romania, Bulgaria, Greece and FYR Macedonia are supplied by a system of transit pipelines from Ukraine. Serbia and Bosnia and Herzegovina are supplied from Ukraine via Hungary, whereas Croatia is supplied via Austria and Slovenia. While Romania and Croatia have sizeable domestic production with gas imports as supplementary supplies, Serbia produces less than 10% of its gas needs and relies on Russian supplies to cover the bulk of domestic demand. Bulgaria, Bosnia and Herzegovina and FYR Macedonia are almost entirely dependent on imports of Russian gas, while Greece imports gas from Russia and Turkey.

Europe receives 80 percent of its Russian gas, a fifth of its total needs, from pipelines that run via Ukraine.

On January 7, 2009, the gas disputes between Russia and Ukraine turned to crisis when all Russian gas flows through Ukraine were halted for 13 days, completely cutting off supplies to Southeast Europe. On January 11 and 12, the European Union deployed an independent monitoring mission in an attempt to solve the crisis, but with little success.

Altogether, 18 countries in Europe had disrupted gas supply after the Russian Gazprom has been cut off. Gas flows to Europe restarted on January 20 and were fully restored within two days.

The disruption in natural gas supply to Southeast Europe during the January 2009 Russia-Ukraine crisis revealed serious shortcomings in the security of supply architecture of energy to EU countries.

In light of this, new developments in the Shah Deniz field in the Caspian Sea appeared as a fit-for-purpose project for the EU. The Shah Deniz field, BP’s biggest discovery since Prudhoe Bay in Alaska, is one of the world’s largest gas-condensate fields.

In December 2013, the Shah Deniz consortium took a final investment decision on the development of Stage 2 of the Shah Deniz field. This triggered plans along full-field development of the Shah Deniz field, expansion of the Sangachal terminal, and construction of the SCPX, TANAP and TAP pipelines, which create the Southern Gas Corridor (SGC) with a sanctioned gross investment of $40 billion. This pipeline will be delivering gas to markets in Europe from the Caspian for the very first time. The SGC system will run for 3500km and cross seven countries. The project has been rightfully described as one of the largest and most complex endeavours ever undertaken in the global oil and gas industry, a massive project indeed – the biggest project outside the military sector. There are 11 shareholders, and it is underpinned with 25-year gas sales agreements with 11 gas buyers. It will provide a new source of energy to Europe ensuring greater diversification, increasing security of supply, unlocking many isolated markets and creating new opportunities for growth.

On September 20, 2014, the ground-breaking ceremony of the SGC took place at the Sangachal terminal near Baku – the BP-operated largest hydrocarbon processing facility worldwide.

The EU’s support of the SGC is spelled out in the two main documents that outline the current priorities of EU energy policy, the European Energy Security Strategy of 2014 and the Energy Union Strategy of 2015 underlining that “work on the Southern Gas Corridor must be intensified … in order to decrease existing dependencies on individual suppliers”. Further evidence backing EU argument concerning the SGC project emerges from statement of Federica Mogherini, EU High Representative for Foreign Affairs and Security Policy, Vice-President of the European Commission. At the 2016 meeting of the SGC Advisory Council, Mrs. Mogherini stated that “The Southern Gas Corridor is more than energy diversification and EU energy security for us. It is also about enlarging and deepening political, economic and social ties with a number of partners in a wider region that can contribute to its implementation: Azerbaijan, Georgia, Turkey, Albania … With my interlocutors here in Baku, I look forward to discussing how to take forward our relationship, not only in the field of energy … We need an all-round strategic partnership between us.”

At the fifth meeting of the SGC Advisory Council held in Baku on 20 February 2019, ambitious plans about doubling the capacity of the Southern Gas Corridor, along with possibility of more European countries becoming clients were discussed. European Commissioner Günther Oettinger, in charge of Budget and Human Resources, who participated at this meeting welcomed the signing of the Joint Declaration on the SGC “as an important step for the further diversification of energy sources and routes in Europe. The partners should make best use of the new infrastructure and envisage to at least double its capacity as soon as possible.”

On May 29, 2018, after achieving significant commissioning and completion milestones across the whole gas value chain, the Southern Gas Corridor was officially inaugurated by President Aliyev at the Sangachal Terminal – the starting point of the first pipeline to transport gas from the Caspian Sea to Europe.

“With this project, we are creating a new energy map of Europe,” President of Azerbaijan Ilham Aliyev noted at the inauguration ceremony. Highlighting the EU relationship, President said: “During these years, we have always felt the support of the EU… The energy sector undoubtedly holds a very big place in the Azerbaijan-EU cooperation format… I am sure that this project, being implemented as part of broad international cooperation, will in the future serve to deepen cooperation in Europe and in our region not only in the energy sector, but also in all other spheres.”

During high-level visits of foreign delegations to Baku, Azerbaijani government officials include familiarization trips to the Sangachal terminal, Azerbaijan’s most important strategic asset, to see first-hand oil and gas developments in this region. It has been a great honour for BP to host these visits at the Sangachal terminal and I have been privileged to accompany these VIP delegations, showing progress of the terminal facilities which create a greater ‘sense of occasion’ of our long-term oil and gas development options and briefing visitors about BP activities in the region.

The President of the European Commission, Jose Manuel Barroso, who visited the Sangachal terminal in June 2014, described Azerbaijan’s hydrocarbon projects as ‘‘a strategic energy avenue for the 21st century with truly geostrategic significance.’’

Another notable visit of the EU delegation that I recall was by Günther Oettinger in April 2010, who was then EU Energy Commissioner. He was impressed by the scale of work at Sangachal, which creates a sense of industry in terms of how we run such a complex facility and pipeline operations.

It was also a great honour for me to host OPEC Secretary General Mohammad Barkindo at the Sangachal terminal in March 2018. The site tour drew a good picture of new oil and gas developments in the region and later, at the SGC inauguration ceremony on 29 May, Mr. Barkindo underlined the importance of the Southern Gas Corridor as it is “changing the world’s energy landscape and will help ensure and strengthen energy security in the world.”
The Southern Gas Corridor is the biggest project in BP’s history, and we are immensely proud to be part of this historic project, made possible by the efforts of so many governments, countries, partners and many other stakeholders.

With these deliverables ahead of us we are confident that we will continue to work in a coordinated and aligned manner, to deliver our main goal in 2020 – first Shah Deniz gas to European market when the final leg of the SGC pipeline system, TAP, is completed.