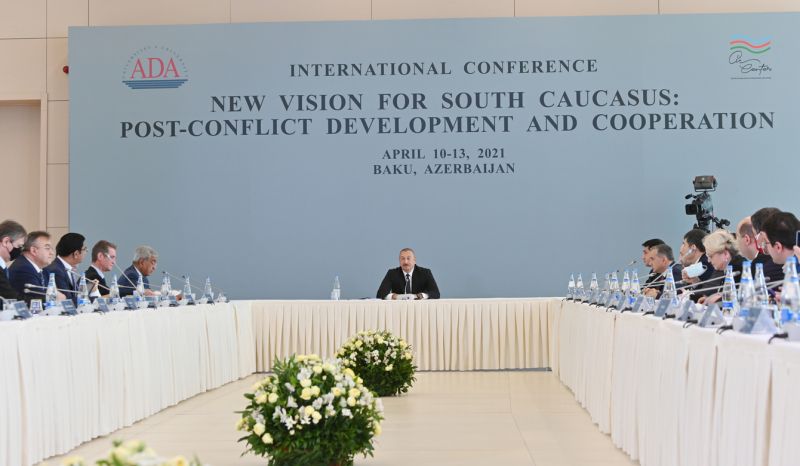 Ilham Aliyev: We Have No Territorial Claims Against Armenia

Azerbaijan expects that the OSCE Minsk Group will present its proposals on further establishment of a peaceful life in the region, President Ilham Aliyev said today at the conference “A New Vision at the South Caucasus: Post-Conflict Development and Cooperation”, according to Azerbaijan in Focus, reporting Turan News.

According to him, the Minsk Group could play a role in the post-conflict situation. “Not as a group that helps to resolve the conflict – the conflict has already been resolved. If Armenia is ready for a peace agreement, there will be many areas of activity for international players. This concerns issues of demarcation, border delimitation, interaction on other issues. I hope they (OSCE MG) will soon arrive with some proposals, and we will study them very carefully,” said the President of Azerbaijan.

At the same time, Aliyev stressed that Azerbaijan has no territorial claims against Armenia. “Zangezur is an ancient Azerbaijani territory. It was transferred to Armenia in 1920, 101 years ago,” Aliyev said. Historically, Azerbaijanis also inhabited the area around Lake Goycha, which is now called Sevan – Iravan.

“It is enough to look at the map of the early 20th century. You will not see Sevan on it. You will see Geycha there. The same is with Irevan. They destroyed the historical part of Irevan. It is an obvious fact that Azerbaijanis lived here, including my ancestors,” Aliyev continued.

“However, this does not mean that we have territorial claims. “I said even more. I said we would return there, but I did not say that we would return in tanks. If we return to Zangezur, if we use this road, why don’t we return to Yerevan? The time will come, we will do it,” Aliyev said.