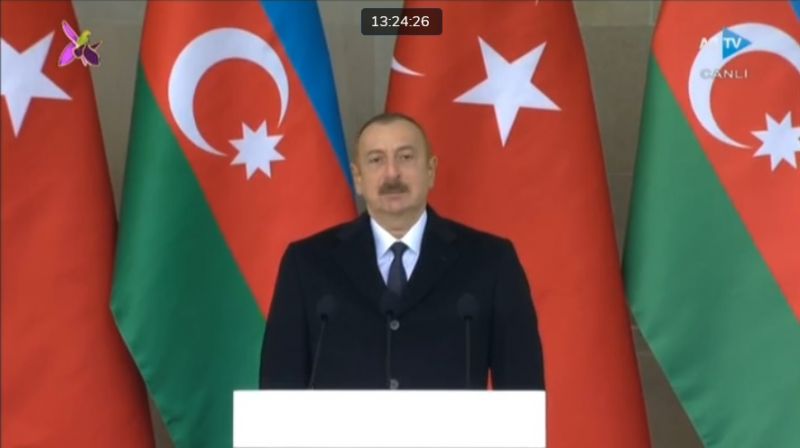 “From the first day of the war, we felt the support of Turkey. The unambiguous and harsh statements of the President of Turkey caused great joy in Azerbaijan and were real support in our right-wing struggle. Therefore, Turkey’s participation in today’s parade is quite natural and justified,” said President Ilham Aliyev, opening the Victory Parade in Baku on December 10, according to Azerbaijan in Focus, reporting Turan News.

Diplomatic efforts to liberate territories and restore territorial integrity have led to the adoption of well-known resolutions and recognition of Azerbaijan’s sovereignty over the occupied territories. However, Armenia did not want to accept it and return the captured peacefully.

The policy of the Armenian authorities over the past two years has once again shown that the negotiations are pointless. Moreover, Yerevan intensified its military provocations against Azerbaijan, making it clear that it is preparing for war.

“We were forced to start the counterattack on September 27 after another military provocation by Armenia. I gave the order: forward the army of Azerbaijan, liberate our lands!

“In 44 days, we have carried out many successful operations, moving forward every day, taking new positions. The final of this holy war was the liberation of Shusha. Only after that did Armenia surrender,” Aliyev said.

“We have proved that the conflict has a military solution, although the mediators argued that this was impossible. We broke the back of the Armenian invaders, smashed their heads, defeated their army. And if Armenia ever tries to show aggression, it will get an even stronger defeat,” he said.

The war showed the unprecedented unity of the Azerbaijani people and the strength of the army’s spirit.

“During the entire war, we did not have a single deserter, although there were 10,000 of them on the Armenian side,” Aliyev said.