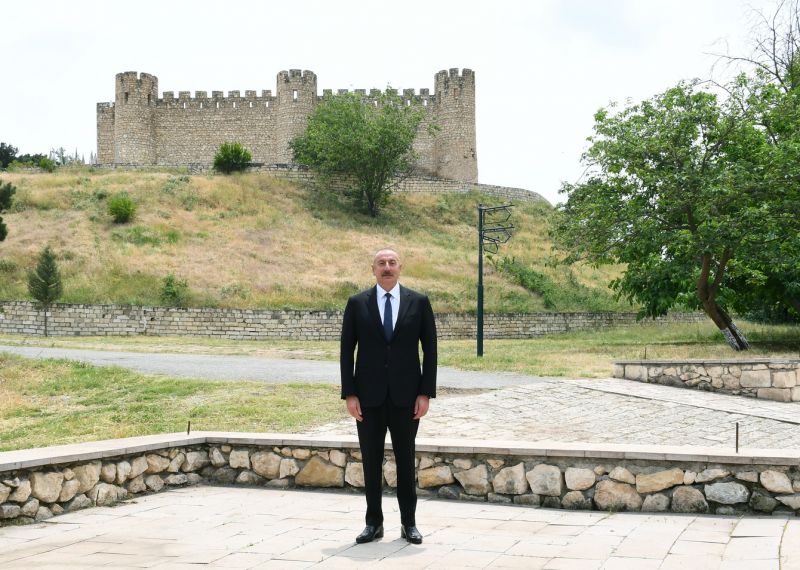 Ilham Aliyev: We will strengthen our borders

From now on, we will strengthen our borders, strengthen ourselves on the state border. This was stated by President Ilham Aliyev on May 28, speaking at the ceremony of laying the foundation for the restoration of the city of Aghdam, according to Azerbaijan in Focus, reporting Turan News.

“No one can put pressure on us, no one can influence us. Now some pro-Armenian countries and circles are making some statements. Let them give, it’s their own business. The European Parliament has once again adopted a resolution based on false facts. I never pay attention to it. I do not advise you, and I do not advise the Azerbaijani people. These are all minor things. The important question is that we are here today, we are here, we stand here and we will live here forever, ” the President said.

He noted that the forty-four days of the war and the post-war period once again showed who is who, who is capable of what.
“We have also resolved many issues, especially in the international sphere, and this will help us make the right decision in the future,” Aliyev said.

He noted that today, unfortunately, the Armenian side does not give up its provocative actions.

“If we see that there is even the slightest threat to the security of our people, the state, we will immediately destroy the enemy on the spot. And they know and see our strength,” Aliyev said.

The President stressed that in recent days, the provocations committed by the Armenian army on the territory of the Azerbaijani-Armenian border should not and should not remain unanswered.

“Once again, they are embittered, once again disgraced. And now look, the whole world is laughing at them. The Prime Minister says one version, the Deputy Chief of the General Staff says another version. And all this happens in one day. These versions are also false,” he said.

According to the head of state, the Armenians have not been able to build a state in 30 years.

“This means that this people cannot build a state. This means that this people can only live within the framework of other great states. He can use the opportunities of great states and build a life for himself there. For thirty years, they had a unique chance – if not for this occupation, if not for the hostility, if not for the atrocities committed by the Armenians against our people, then today, perhaps, Armenia could exist as an independent state. And now look at how, in what shameful state they are. They openly admit that they cannot defend their state, their borders. They shift the blame on each other -the current government on the old government, the old government on the current government. But, in fact, they are all to blame, because they made a big mistake. They did not think that they would find themselves in such a helpless situation, and they themselves are the culprits of all their troubles,” Aliyev concluded.