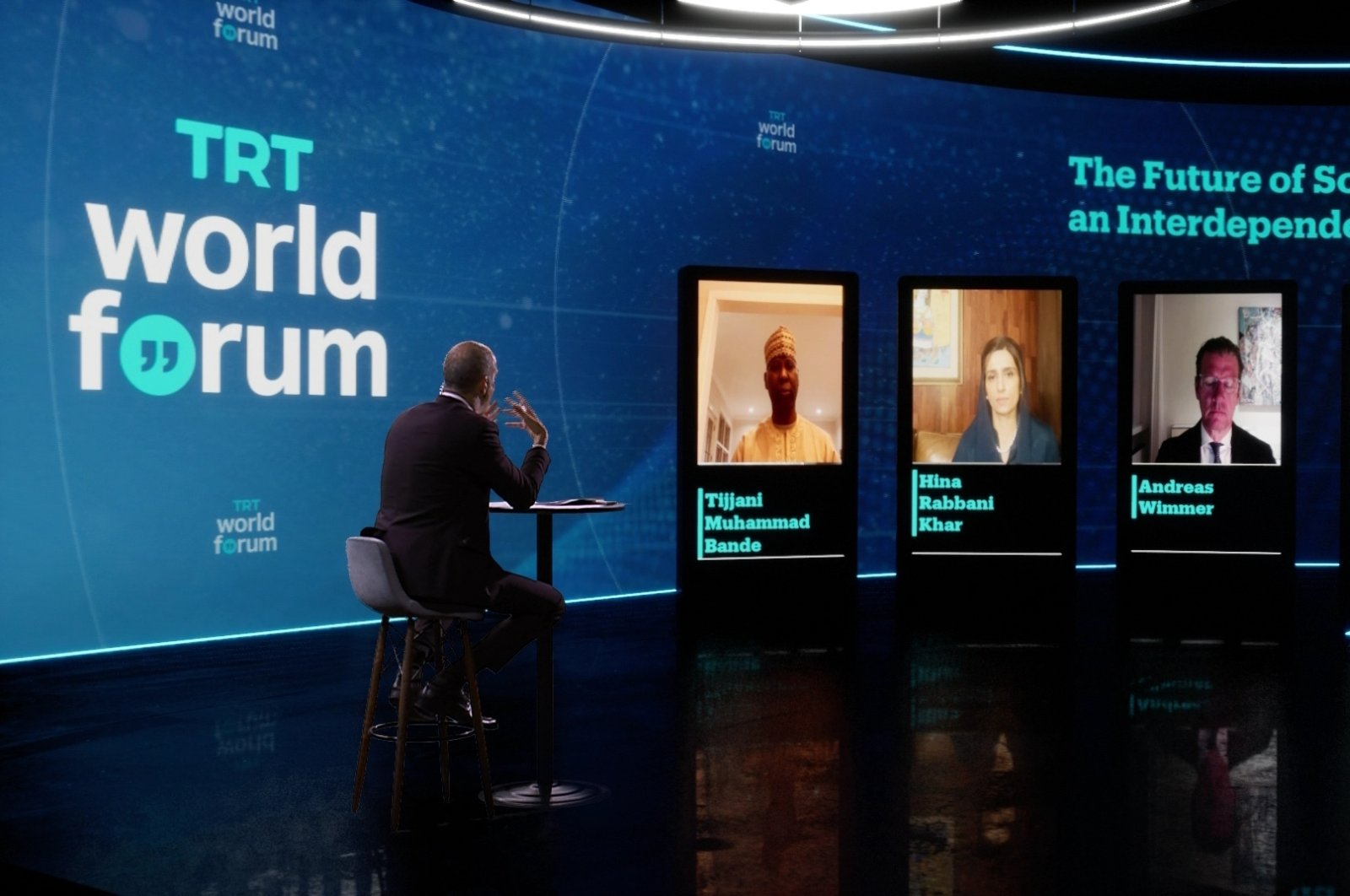 Important messages to the world from Istanbul

TRT World Forum 2021, started with the opening speeches of President Recep Tayyip Erdoğan, Republic of Turkey Communications Director Fahrettin Altun and Director General of TRT Mehmet Zahid Sobacı attracted attention on the international level. On the first day, important issues were discussed in “The Future of Sovereignty in an Interdependent World,” “Global Governance and the Challenges and Opportunities of Multipolarity” and “Towards New Realignments in the Middle East: The Future of Turkish-Arab Relations” sessions.

In his opening speech, President Erdoğan emphasized that the system after World Wars has failed to produce justice and stability for a long time and continued:

“This system, whose foundations were laid following World War I, and solidified after World War II, has failed to produce justice and stability for a long time. It is impossible for this system to continue in its current structure, in which the Islamic world has no say, the demands of Africa, Latin America, and South Asia are ignored, and only the interests of the five most powerful countries are taken into account. The need for reform in the United Nations and other international organizations can no longer be disregarded.”

Ambassador of Turkey to the Sultanate of Oman Ayşe Sözen Usluer suggested in “Towards New Realignments in the Middle East: The Future of Turkish-Arab Relations” session that “Turkey pursues a humanitarian foreign policy, as it does in the rest of the world. Turkey envisages the development of Turkish-Arab relations on the basis of win-win. Policies need to be developed accordingly between Turkey and each Arab country.”

Parliamentary Assembly Representative of Council of Europe Ahmet Yıldız described TRT Arabi as a great example for parties to understand each other and stated that other Arab countries would follow the step of the Turkish government and establish such channels.

Former Foreign Secretary of Pakistan Tehmina Janjua attended the “Global Governance and the Challenges and Opportunities of Multipolarity” session and highlighted that Turkey-Pakistan relations are vital to Pakistan’s interest and added, “There is a strong relationship between two countries. The power of Pakistan – Turkey relationship can be observed through high level visits, including the interaction between President Erdoğan and Prime Minister Imran Khan.”

‘Conditions of the era’

“First, we have to consider the formation of U.N. Realities of that era was obvious, problems could be seen by everyone but the nations of the world could not handle these problems singlehandedly. There were problems and chaos in the world. Norms were argued without no rules. Yet, there was the idea that real politics need to discuss all elements. Today, we have common issues but still, I do not want to talk about the problems that all nations created on equal basis. Even though, U.N. has made a real progress, still some countries are experiencing some disorders.”

U.K. Foreign Secretary’s Special Representative for Climate Change Nick Bridge spoke in the session “Climate and Global Health Crises as Strategic Threats” and suggested that it is important for Turkey to sign the Paris Agreement and continued:

“President Erdoğan’s announcing that by 2050, Turkey will be carbon neutral is really important. Turkey is an extremely significant country for low carbon consumption.”

Prince of Jordan Hassan bin Talal participated in “International Economic Development: A New Age of Global Inequality?” session and suggested that unlike expected, the pandemic did not even spur regional cooperation, let alone the global cooperation.

The 5th TRT World Forum, being held this year with the participation of nearly 100 speakers from more than 30 countries, continues to address many crucial global issues ranging from climate and global health crises to international economic development and from the rise of Eurasia to digital governance in its second day. TRT World Forum 2021 can be followed live from www.trtworldforum.com.

This article originally appeared in DAILY SABAH on 20 Oct 2021.