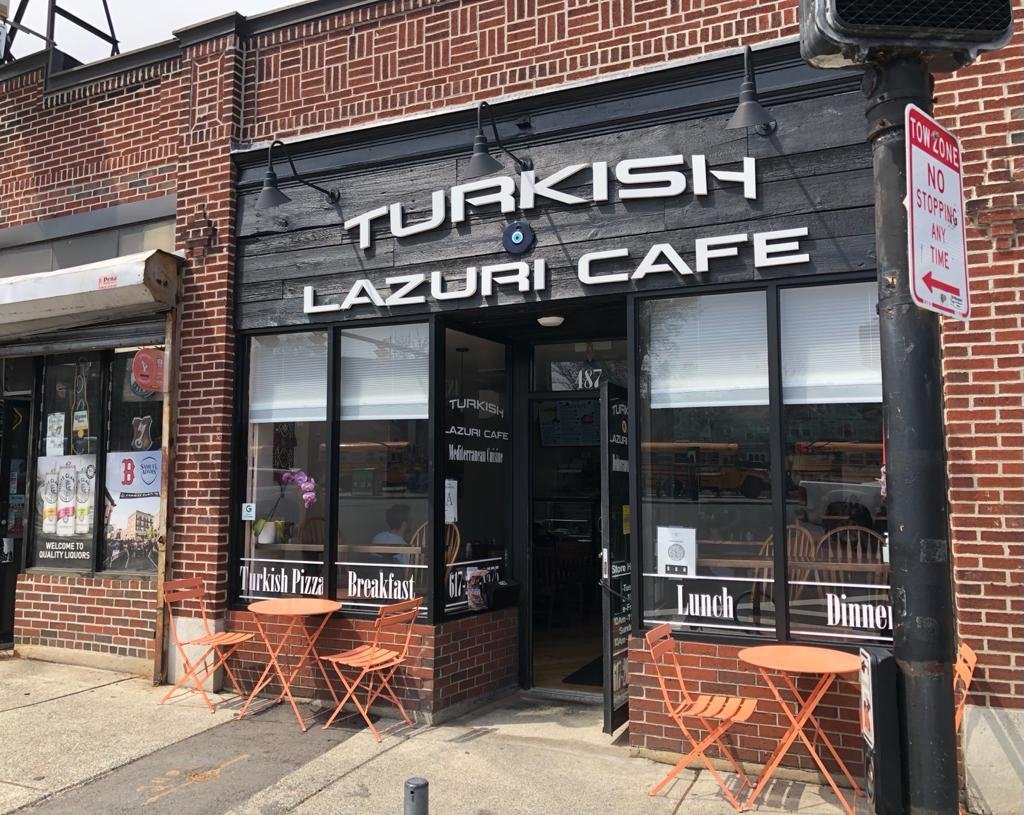 Turkish Lazuri Cafe is located in the Boston area in Massachusetts, U.S. (Photo by Matt Hanson)

Among the many Turkish cafes, restaurants and eateries in the Boston area is a bijou outfit with a basic, though enticing menu, serving a delightful variety of staple recipes from a counter overlooking a busy intersection.

The mastermind behind Lazuri Cafe is a Laz-speaking cook named Chef Ziya who is said to have run a professional kitchen for a quarter of a century. Local regional varieties special to seafood-rich, and dairy-heavy Black Sea cuisine are conspicuously absent from the modest place of business where, on afternoons, mostly male guests converse and order in Turkish as their beloved mother tongue reverberates over the stoves and sinks throughout. Yet, for a crash course in the basic alimentary foundations of life in Turkey, it offers a fair spread.

A quick gleaning from a backlit board above the cashier lends itself to impulsive, snappy decisions. As the spring sun gathers heat over the worn blacktop, where dense traffic merges along lanes beside walkers ambling about between a corner taqueria, donut shop, and vegan diner. Lazuri Cafe is at home amid the diverse representation of ethnic establishments that color the tapestry of peoples who have made the city of Cambridge in the U.S. state of Massachusetts home for decades, and in some cases generations, yet, have not lost their taste in the foods of their ancestors. 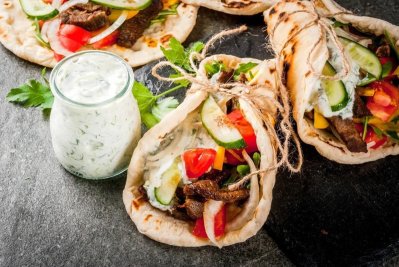 Lazuri Cafe’s cacık is thicker and creamier than you would expect. (Photo Lazuri Cafe)

Still, long distances change the ecology of ingredients and how they come together when divorced from the heartland and encapsulated in a sense of time that pivots around the unsettling drama of international migration, especially from a place so far, culturally and geographically from America’s northeastern shores. The whipping gusts of the Black Sea still blow over waves that slap hard against the industrial bedrock of the north Anatolian forests that brave Russian winds, Georgian airs, Eastern European moods, and Greek heritage.

In step with the practical wisdom of tradition, the ample consumption of yogurt is a boon as summer approaches blazing. Lazuri Cafe prepares a fresh cacık (pronounced “jajik”) soup, which is perhaps thicker than some might know and enjoy back in Turkey. And together with thin slices of raw cucumber, which prevent dehydration, the nourishing, cold bowl is a simple delight and goes well with a tall glass of ayran, a salty yogurt drink that, with a healthy serving of cacık, is cooling and yet wholly substantial. 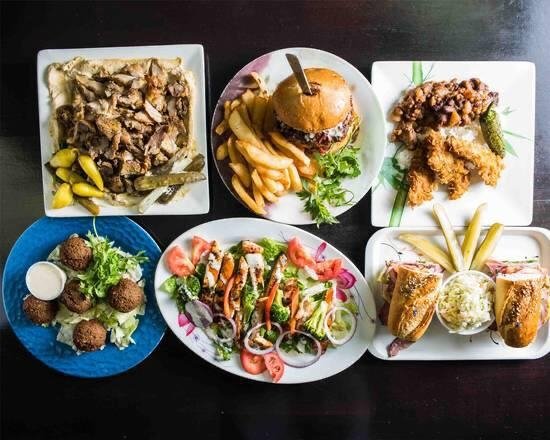 Of flour and water

Like its population and history, culinary culture in Turkey is as subject to variation as the features of its mysterious landscape. At the same time, the roots that run through its food go deep, and remain firm, strengthening the body of its mass with the real power of life’s joys and sorrows, and with time-honored knowledge of the land proven and applied by proud, healthy communities who have farmed, gathered, cooked and eaten seasonal produce since time immemorial. 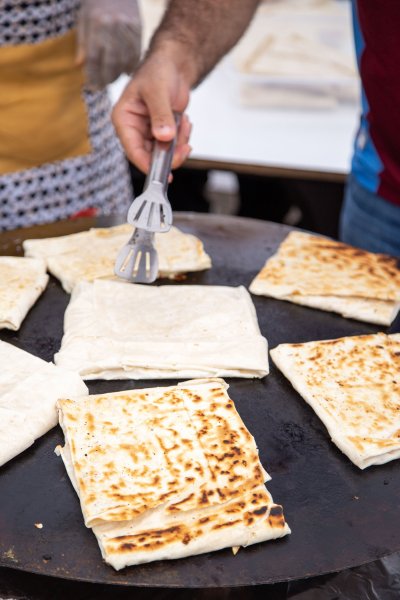 Transplanted to the commercial concrete of Boston, and the homogenizing influences of American assimilation, flour whitens, spice softens, and recipes that would otherwise crackle with the finishing touches of olive oil and village eggs harvested in the shade of ancient, millennial trees. For example, at Lazuri Cafe, there is a dish, traditional to the Aegean region, though made throughout Turkey called, “gözleme,” and is translated into English simply as a kind of flatbread.

In Turkish, “gözleme,” is a homonymic play on the words for “grill,” and “eye,” which are “köz” and “göz” respectively. The flatbread, which, in Turkey is either made with a very thin, rolled dough called “yufka,” and grilled over a round, belly-like stovetop, or with a denser kind of bread known as “bazlama.” At Lazuri Cafe, the flour resembled that of “yufka,” though, for a naive guest unversed in the Anatolian kitchen, particularly when filled with feta cheese, it might seem like a skinnier, whiter version of a crispy, corn-based quesadilla.

Lazuri Cafe offers gözleme with spinach, or “kıymalı,” which is generally a sauteed minced beef with onion. The gözleme of Chef Ziya, when filled with feta cheese, is light, scant and dry. And while many accustomed to the rich, fat American diet would consider this to be a fatal drawback, it is, in fact, utterly authentic. In the shorefront mountains along Turkey’s green Aegean coast, talkative women in loose shalwar pantaloons, embroidered vests, felt slippers and florally patterned head shawls flatten “yufka” and prepare “gözleme” so that circular burns on the surface of the bread look like eyes staring back at the eater, encircled by village gossip.

To stir it up 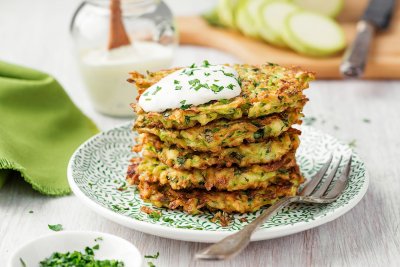 Often served with fresh herbs and yogurt, mücver are a staple food in Turkish cuisine.

For starters, Lazuri Cafe is true to its origins, as Turkish cuisine facilitates appetizers in the literal meaning of the word. Their approach to zucchini fritters, “mücver” in Turkish (pronounced “moohjver”) are healthier than might normally be enjoyed in the city of Istanbul, for example, where, even in health-conscious restaurants “mücver” are fried longer, crispier and are less eggy than that at Lazuri Cafe. In its grated summer squash, “mücver” are customarily laced with herbs, cheese and sometimes potatoes to round them out.

As a late-night haunt, Lazuri Cafe would be almost perfect. In the midst of a bright, clear weekday, the kitchen, however, is not entirely nuanced or vibrant in comparison to many of the neighboring restaurants, and particularly when reflecting on the normal course of fare in the old country. But, it is a genuine establishment and prepares a hearty fixed menu that, among its miscellany of appetizers, includes the party favorite, “sigara böreği,” or cigar börek, a long, cylindrical deep-fried dough lined with feta cheese and parsley stuffing. 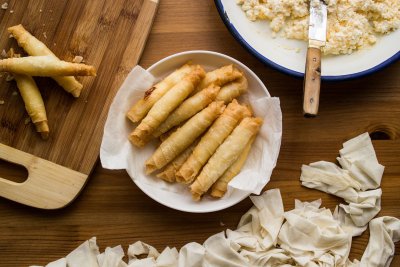 Sigara böreği are cigar-shaped rolls stuffed with cheese and parsley.

The cigar börek at Lazuri Cafe is satisfying, as the phyllo dough is crisped to a delicate degree, allowing for a texturally complex experience around the salty, hard cheese added quite lightly along its interior. Unlike the generous use of yogurt, Lazuri Cafe is more spartan when it comes to cheese, a relative contrast from Greek restaurants which would tend to serve a block of feta over salads, doused in bright, greenish-yellow olive oil. But there is a lack of rawness at Lazuri Cafe, an element that, whether as washed arugula or sliced tomato, celebrates the local environment when dining on such foods in Turkey.

And finally, getting to the meat of the issue, there is, authentically, no shortage of options for carnivores. One wrap, popular across Anatolia, named after Adana, a southern Turkish city just north of the Mediterranean Sea, is packed with chopped lamb. Lazuri Cafe made a valiant effort, though nothing so extraordinary as to compel a rewrite in the history of Turkish cuisine as it has moved from the kitchens of the Black Sea to the streets of Boston. And though Lazuri Cafe is not above average for an American or Turkish kitchen, it is honest, wholesome, straightforward, and does the trick of ameliorating and conveying the bittersweet nostalgia that accompanies life lived in memory of better food.

This article originally appeared in DAILY SABAH on 19 May 2021.