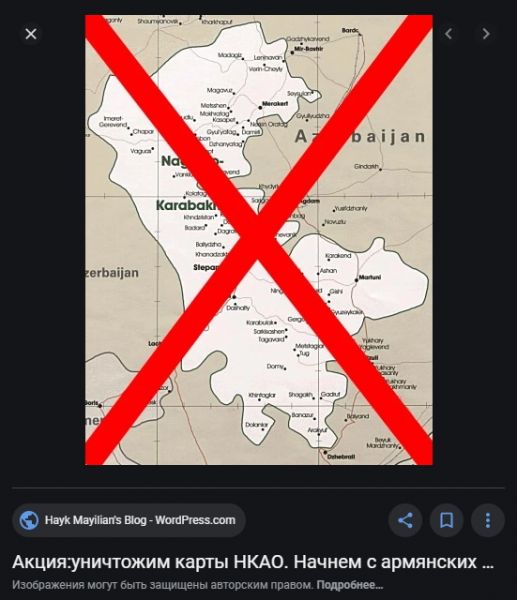 In the End, There Must Be Peace

There are open threats against Azerbaijan from Yerevan and Khankendi. The Armenian Foreign Ministry and Vitaly Balasanyan are especially zealous in Karabakh. Twenty-nine years after the Armenian occupation of the region, Vitaly Balasanyan suddenly remembered the Nagorno-Karabakh Autonomous Region liquidated by the laws of Azerbaijan and Armenia in the early 90s and threatens to return the possessions of Armenians within the boundaries of this Soviet autonomy, according to Azerbaijan in Focus, reporting Turan News.

However, there are different opinions in Armenia and Karabakh. On March 23, in an interview with the Armenian public figure, Yerevan resident Ishkhan Verdyan, who explained more than a century of erroneous line of the Armenian people by the secret intent of Russia. The Kremlin appointed Armenians to be a human shield in front of Turkey, Verdyan said.

An article by Ashkhen Virabyan has been published on the esse.am Yerevan website, which also attracts attention with a new, for the Armenian people, vision of the current reality. The author draws a line under the era of the search for peace between Azerbaijan and Armenia within the framework of the Madrid principles, and states about the new platform created by the Statement of November 9 “for an indirect dialogue between Baku and Yerevan with the participation of Moscow.”

The liberation of the Karabakh regions from Armenian occupation by Azerbaijani forces and the defeat of the Armenians in the war, on the one hand, “sort of unleashed a complex tangle of contradictions, on the other, gave rise to new ones associated with a difficult transition from a state of war to a peaceful dialogue and constructive cooperation.

According to an analytical article by the Carnegie Moscow Center, the conflicting parties found themselves in different moral, psychological and political conditions. Armenia is in a serious political crisis; it will feel the consequences of defeat for many years. As for Baku, if President Ilham Aliyev wants to run again tomorrow, he will definitely win by a huge margin,” the author writes in esse.am.

According to Carnegie Center experts, Aliyev “unexpectedly received more than he could have imagined,” but now he needs to change his aggressive rhetoric to a more moderate tone – in order to appear in the region as a corridor of peace, not war. ”

Virabyan considers it necessary now, after the defeat, to think about the people, their fates, their well-being, to engage in neutralization of the significant potential of the conflict in Karabakh, which has accumulated over the past 30 years in the relations between Armenia and Azerbaijan, Armenia and Turkey. This is the only way over time to move from a conflict model of relations to pragmatic economic cooperation.

She asks a question about the future of Armenia: what to develop, how to move forward, what political union will be the key in the issue of uniting society?

Over time, according to Thomas De Waal, senior researcher at Carnegie Europe, “Baku and Yerevan should come to a full-fledged peace agreement with each other.” The essay author lists the first concrete examples of economic cooperation between still enemies: Gazprom Export and the State Oil Company of Azerbaijan announced the conclusion of a short-term contract for the transportation of Russian gas to Armenia through Azerbaijan. Armenia opened its airspace for Azerbaijani and Turkish aircraft. On March 14, during a meeting with OSCE Chairperson Ann Linde, Aliyev said that Baku and Yerevan had begun discussing the resumption of transport communications, which “could become a turning point” for the situation in the region.

Let us add other well-known examples: Azerbaijani drivers help Armenian drivers who got into a difficult road situation in the “Lachin corridor”, and doctors in Khankendi treated a Turkish driver who was urgently brought to the hospital by Russian peacekeepers. “In the end, Azerbaijanis and Armenians must live side by side,” concludes Ashkhen Virabyan.