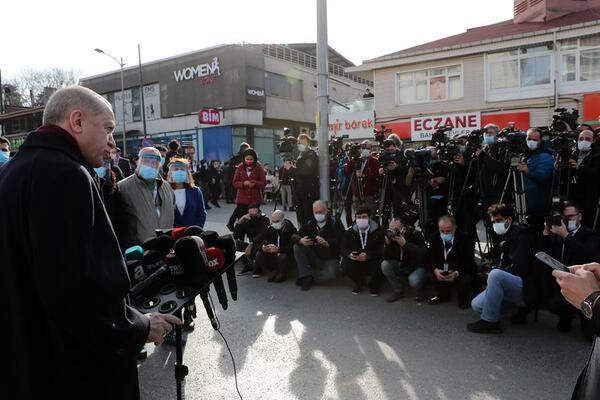 Incidents in US shock all humanity: Erdoğan

Extending his condolences to the families of those killed in Washington, D.C. during riots in Capitol Hill, Turkey‘s president on Jan. 8 described the deadly incidents as “shock” for humanity.

“This process in the US, which was described as the so-called ‘cradle of democracy’, really shocked all of humanity,” Recep Tayyip Erdoğan said following a Friday prayer in the Turkish metropolis Istanbul.

Erdoğan said he hopes transition of the presidency to Joe Biden on Jan. 20 occurs as calmly as outgoing President Donald Trump has said in his statement.

The Turkish president also extended his condolences to the families of those killed during the riots in Capitol Hill and wished recovery to the injured.

On Wednesday, supporters of Trump protesting Congress’ certification of Joe Biden’s presidential win clashed with police, eventually breaching the Capitol building and making their way to the Senate floor.

At least five people died after protesters stormed into the building, including one woman shot by Capitol Police. Democratic and Republican lawmakers have unanimously condemned the assault on the Capitol by the people and called the riots a “coup”, “despicable act of terrorism” and “national embarrassment” in separate statements.

Trump, his political allies and millions of Republican citizens have for months claimed that the Nov. 3 election was rigged.

This article originally appeared in Hurriyet Daily News on 08 Jan 2021.