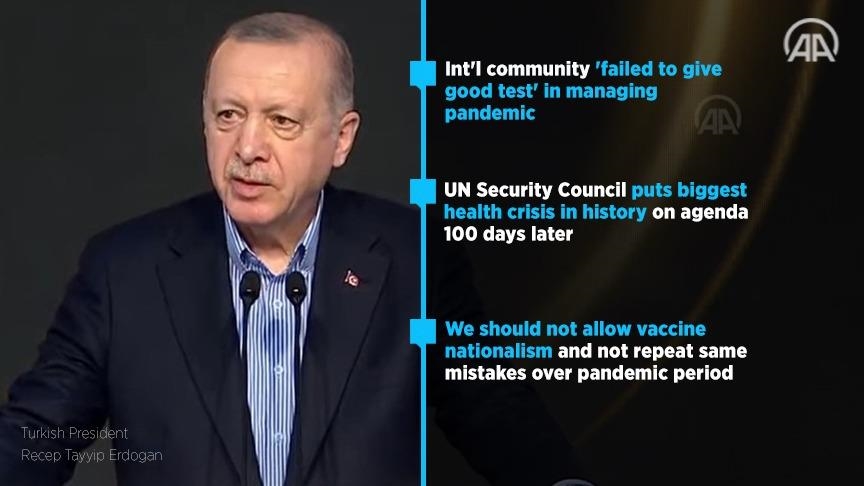 The international community fell short when faced by the test of coronavirus, Turkey’s president said on Friday.

The world at large “failed to give a good test” on the pandemic, Recep Tayyip Erdogan said in his opening speech at the three-day Antalya Diplomacy Forum held on the Turkish Riviera.

The UN Security Council took 100 days after the outbreak erupted to put “the biggest health crisis in history” onto its agenda, he lamented.

Urging world leaders not to permit vaccine nationalism to take hold and not to repeat the same mistakes as the pandemic progresses, Erdogan underlined that the virus outbreak had “sharpened injustices” in the world.

“In the face of the pandemic, which has reached the world’s most remote places, from the tropical islands to Siberia, cooperation gave way to protectionist and competitive policies,” said Erdogan.

“While the burden of billions of people could only be lightened by solidarity, our African, Asian and Latin American brothers and sisters were abandoned to their fate,” the Turkish president said.

“The pandemic has further deepened the gap between the rich and the poor. The recurrence of social unrest in many countries, the revival of irregular migration routes, and the increase in deaths in the Mediterranean are the most striking examples of this,” he explained.

In this process, Turkey tried to come to the aid of its friends all over the world, he added.

‘Turkey will share its domestic vaccine with all humanity’

Erdogan reiterated that during the pandemic, Turkey sent medical supplies to 158 countries and 12 international organizations at their request.

Erdogan said that asylum seekers in Turkey are not kept separate from Turkish citizens and that they also enjoy access to the healthcare services provided by the country.

Erdogan said Turkey plans to finish efforts to produce a domestic COVID-19 vaccine, which have been carried out with a human-oriented universal approach, by the end of this year.

“When it is ready for use, we will hopefully share our domestic vaccine with all humanity,” he said.

Since December 2019, the pandemic has claimed over 3.84 million lives in 192 countries and regions, with nearly 178 million cases reported worldwide, according to the US’ Johns Hopkins University. 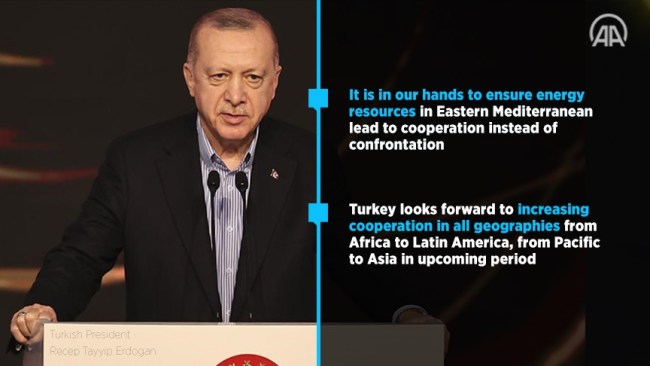 Energy resources in Eastern Med should lead to cooperation

On the issue of energy resources in the Eastern Mediterranean, Erdogan said all parties involved must work to ensure that these “lead to cooperation instead of confrontation.”

“We want the Mediterranean to be an area of peace, prosperity and cooperation. Our proposal for an Eastern Mediterranean conference to be attended by all stakeholders is still on the table,” Erdogan said.

This year, Turkey and Greece resumed consultative talks to resolve bilateral disputes in the Aegean and Mediterranean seas.

Turkey, which has the longest continental coastline in the Eastern Mediterranean, has rejected maritime boundary claims by Greece and the Greek Cypriot administration, stressing that their excessive claims violate the sovereign rights of Turkey and the Turkish Cypriots.

Last year Ankara sent out several drill ships to explore energy in the Eastern Mediterranean, asserting its rights in the region as well as those of the Turkish Republic of Northern Cyprus (TRNC).

Boosting cooperation in all regions

Erdogan also said that in the coming days Turkey looks forward to boosting cooperation in all regions from Africa to Latin America and from the Pacific to Asia.

“We’re pleased with the momentum we’ve recently achieved with our neighbor Greece. We also want to strengthen our cooperation with our allies the US and EU,” said the Turkish president.

“I believe the Antalya Diplomacy Forum will turn into a ground where the heart of global diplomacy beats in time,” he said.

Erdogan said that the sphere of diplomacy has expanded with rising globalization and recent developments in the fields of communication technology, the internet, and social media.

“Today, when we say diplomacy, we’re not just talking about meetings held behind closed doors between state and government officials, rather this concept also refers to work carried out in a wide range from public diplomacy to cultural diplomacy, from tourism diplomacy to trade and digital diplomacy,” Erdogan said.

Erdogan stressed that the expansion of the field of diplomacy offers great opportunities to humanity in reducing tensions.

He urged countries to engage more with the subtleties of diplomacy for the peaceful resolution of problems.

Erdogan also urged world countries to boost their diplomatic efforts to reform the UN Security Council to be more inclusive.

“We can’t continue our journey in the 21st century with these institutional structures imposed on us by the bipolar perspective on world order,” Erdogan said.

Erdogan has long decried the unrepresentative nature of the Security Council’s five permanent members, saying: “The world is greater than five.”

Erdogan underlined that Turkey has been hosting nearly 4 million Syrians for about 10 years and it was the first country to fight on the ground against terrorist groups operating in Syria, such as the YPG/PKK and Daesh/ISIS.

“Turkey has contributed to the security of Europe and the world, as well as its own, by ending the Daesh/ISIS presence in Syria to a large extent,” Erdogan said.

“As of now, we have neutralized 4,500 members of the Daesh/ISIS terror group,” he said.

But he decried how Turkey did not get the support it expected from the international community in its fight against terrorist groups and in its efforts to establish stability in Syria.

Following his speech, Erdogan met with Milo Cukanovic, the president of Montenegro, for a closed-door meeting of about a half-hour.

Issues of global importance are being analyzed in depth during the three-day forum, including the Balkans, the future of Europe, trans-Atlantic relations, refugees and migrants, and the threat of terrorism. There will also be a session on Turkey’s proposal for an Eastern Mediterranean conference.

This article originally appeared in Anadolu Agency on 18 June 2021.