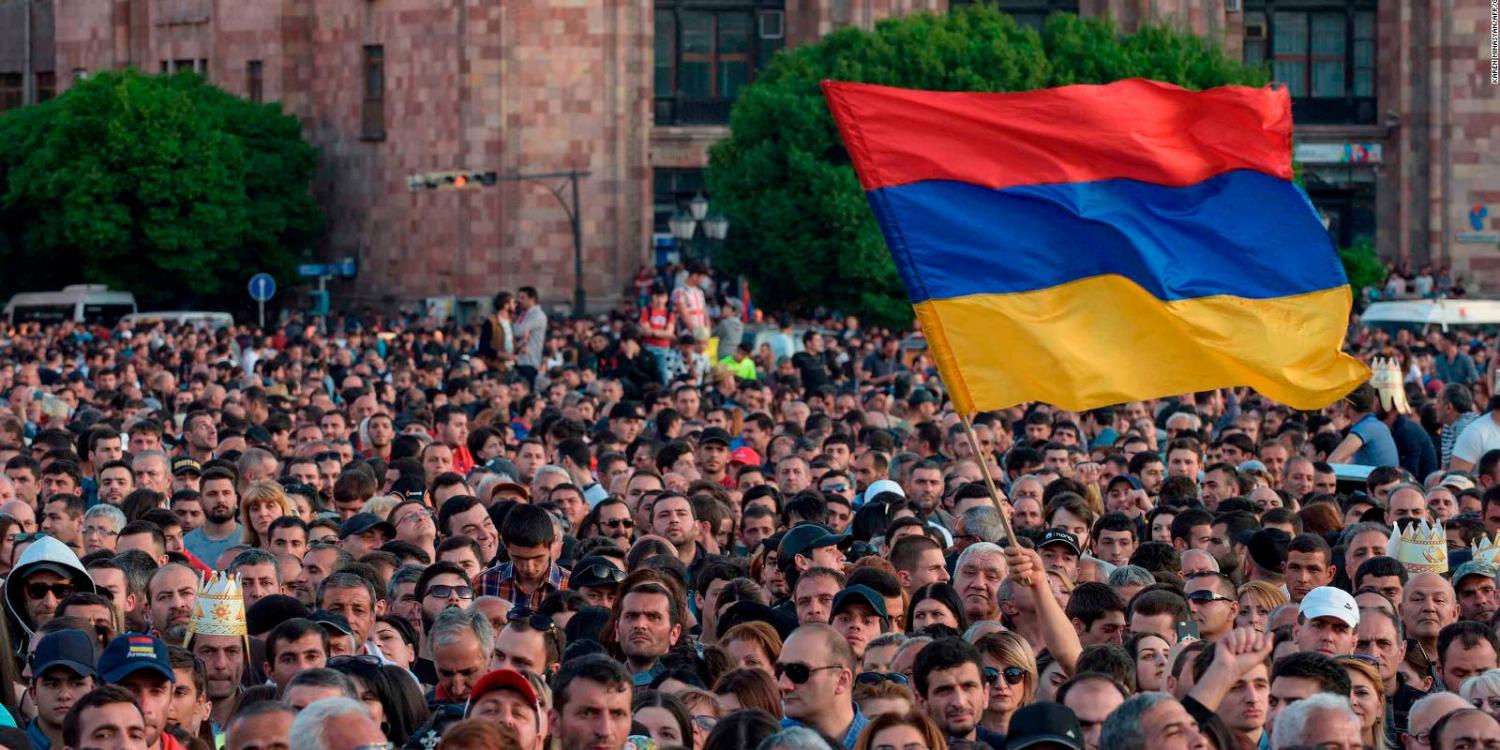 Ishkhan Verdyan: The Kremlin Appointed Armenians To Be a Human Shield Against Turkey

This is the opening slogan of the Facebook activist, Ishkhan Verdyan. Naturally, Verdian’s posts cause sharp discontent among many Armenians, as he enlightens his compatriots by telling the truth about Azerbaijani-Armenian relations, exposing Sargsyan-Kocharyan, and denying the Karabakh-Nzhdeist ideology in modern Armenia.

On March 18, in an open letter to President Ilham Aliyev, Ishkhan asked to take back to Azerbaijan “the citizens of this country” Sargsyan and Tocharian so that the Armenians could live in peace.

According to Azerbaijan in Focus, reporting the interview by Turan News, Ishkhan Verdyan agreed to answer several questions, conducting an interview from Yerevan.

You write on your Facebook page that you are an engineer and live in Yerevan. Is it true?

– I graduated from the department of mechanical engineering at the Yerevan Polytechnic Institute. Due to the difficult economic situation in the country and in our family, I took an academic break in the second year and left to serve in the army. I hope that someday I will catch up and continue my higher education. I was born, always lived and remain in Yerevan, now I work as a leather tailor.

You write so-called pro-Azerbaijani posts on the Facebook. You have a lot of friends from Azerbaijan on your page; you openly discuss with criticism the events taking place in Armenia. Other Armenians can reads all this. How they treat you, what they tell you, they probably accuse you? What are your relations with neighbours who read your posts?

I do not write pro-Azerbaijani posts, I write only pro-Armenian texts, solely for the sake of Armenia. However, it turns out that any correct action for Armenia means a correct post about Azerbaijan. This means that we have common interests if countries are developing in the right, conflict-free direction.

A number of my Azerbaijani friends is growing. At first, the attitude of the Armenian society towards me was very critical. However, the attitude is changing, many are interested to know my revelations, and information comes to me. Many Armenians agree with me. I think that soon the Armenians will give the expected reaction.

My relations with many acquaintances deteriorated, but then these acquaintances began to convey their apologies to me and say that they spoke so that I would not get into trouble. Of course, there are negative attitudes towards me in Armenia. But the main thing is that my relatives support me.

You’re saying that at first, the attitude of the Armenian society towards you was very critical, and then it changed. Has it changed after November 10, 2020?

I think that the enmity between Turkey and Armenia was caused artificially, in the trenches of the Second World War, Armenians and Azerbaijanis were friends. The enmity began when, I think, the KGB probably realised that the Armenian people could become a human shield against Turkey, with our lives we had to stand up like a mountain against the expected Turkish aggression, take the first blow. After the collapse of the USSR, the Karabakh conflict was also artificial; there are facts of provocations from the Kremlin. Then the Armenian rulers began to use the conflict when their own interests prevailed in the conflict. Even today, the old elites try to maintain enmity. Thank God, they fail to do this, and probably, they will not succeed. The war has opened the eyes of many and revealed the truth. I hope this war will be the last one between the Armenian people and the Turkic world.

You’re saying that the enmity began artificially. I agree and there are many facts about this. How to change the current situation? What is being done for this and what should be done?

At the beginning, the attitude towards me was sharply negative. Then, gradually, the people began to think a little before sending me “to reside in Azerbaijan”. There is only one-way to change the situation: to establish a dialogue between ordinary people so that they do not want to be at enmity, to kill their neighbours. You cannot rely on politicians. First, it is necessary to expand contacts between ordinary people in both countries, and then politicians will be forced to follow the wishes of the people. This is my conclusion: when I communicate, I invite my Armenian friends to communicate with Azerbaijanis. This is the only working option. Politicians do nothing and do not intend to do anything. Only people can force politicians to start cooperation between the two countries.

Until the last war, Pashinyan made threatening statements against Azerbaijan, which was the impetus for the war (“Karabakh is Armenia, that’s it”). If he is against hostility in the region then why was he saying that?

Nikol Pashinyan is a contradictory personality for me. Throughout his time in power he always spoke about peace, never conducted militant rhetoric, called on the Armenian society to dialogue with Azerbaijanis, to find contacts with Azerbaijan. Nobody before him called for the solution of the Karabakh conflict to suit Armenia, Karabakh and Azerbaijan. Then he began to make other statements, he said, “Karabakh is Armenia, that’s it.” I got the impression that he was suicidal in wanting to summon fire on himself. I do not understand the change in his rhetoric. I cannot give another assessment.

How do you assess the provisions of the joint Statement of the three presidents of November 9, 2020?

The statement of November 9 is a compulsory measure. I do not like many of the points in it. First, the war could be stopped without intermediaries; countries could stop it themselves. Nothing got in the way, Ilham Aliyev made it clear more than once. Second, the corridor along Syunik should not have been placed under the control of mediators; the corridor had to be opened in the course of direct negotiations without a third country and for the benefit of the people. It is not clear to me why Pashinyan sat without action and only did what was expected of him too late.

An end to the bloodshed is good and encouraging. I am glad that this presence in the region of Turkey balances Russia and gives an objective assessment of the events in Karabakh.

In recent polls, Pashinyan is gaining about 30 percent of the vote, which is more, much more than all of his competitors. Do you think these polls reflect the true alignment of public opinion in your country?

Polls are quite realistic. Among the existing politicians in Armenia, no one will reach Pashinyan in popularity. If there are elections today, no one else will get a majority in parliament. Pashinyan is a leader. This is not because Pashinyan is so good, the reason is in the predatory elite that has formed in our country, which created all this and is trying to maintain the existing situation. It is just that Pashinyan is the best of them all.

I would like to ask a question that interests everyone in Azerbaijan. We saw live, no longer in photographs, that absolutely all Azerbaijani cities and villages in the Karabakh region are completely, sometimes to their foundations, destroyed. How did it happen and why? What’s the point, it’s a hard and long work – breaking houses. Did they know in Armenia what was happening on these lands?

In Armenia, they had no idea what was happening in the destroyed regions of Azerbaijan. The soldiers who served there believed that everything was as it should be, since Azerbaijan lost the war. I was told so when I served there. I saw Aghdam and told my Azerbaijani friends that you will see Aghdam, it is monstrous. I wish it never happened.

In kitchen conversation, Armenians do not need Karabakh. People at home said: why do we need Karabakh, it would be better if we didn’t have it. But in the collective mind, it was asserted that Karabakh is ours. And when the son was taken away to serve in the army, in Karabakh, the families were horrified.

Early parliamentary elections will be held in Armenia this summer. What are your expectations?

I really hope that before the start of the elections, a political force will appear in Armenia that will maintain the correct policy towards Turkey and Azerbaijan. The force should be able to pull the country out of the crisis. If it does not appear, then everything will remain as it is – Nikol Pashinyan wins, other parties will get some seats, and Robert Kocharyan does not get anything in the National Assembly. I hope so.

Among the existing politicians, Pashinyan is the most optimal candidate for the post of prime minister. He and his government are very controversial. One of his minister says that we need to forget the ideology of Garegin Nzhdeh; we need to open the borders. Another says that the Karabakh conflict has not been resolved and can only be resolved in the format of the Minsk Group. There is confusion. However, I think that if he remains in power and becomes prime minister, he will obey the people’s demand for peace.

Do you have any intention to formalise yourself as a human rights defender, politician, and head of a non-governmental organisation?

Recently, I have become very closely acquainted with Armenian politics and politics in general in the region. I realised that this is a terrible, dirty thing. I do not want to get involved in the process of deceiving the people. I am a creative person; I want to create a video game. This is my dream. If a public organisation or party appears that will lead the people to peace and progress, it will receive my support. Progress is the only thing that Armenia did not see and that the Armenians need. I will stand up for these people so that they win. It is wrong to swear, but life will show … Now, I have no desire to become a politician. God grant that there are sane people in Armenia who will take the process into their own hands.