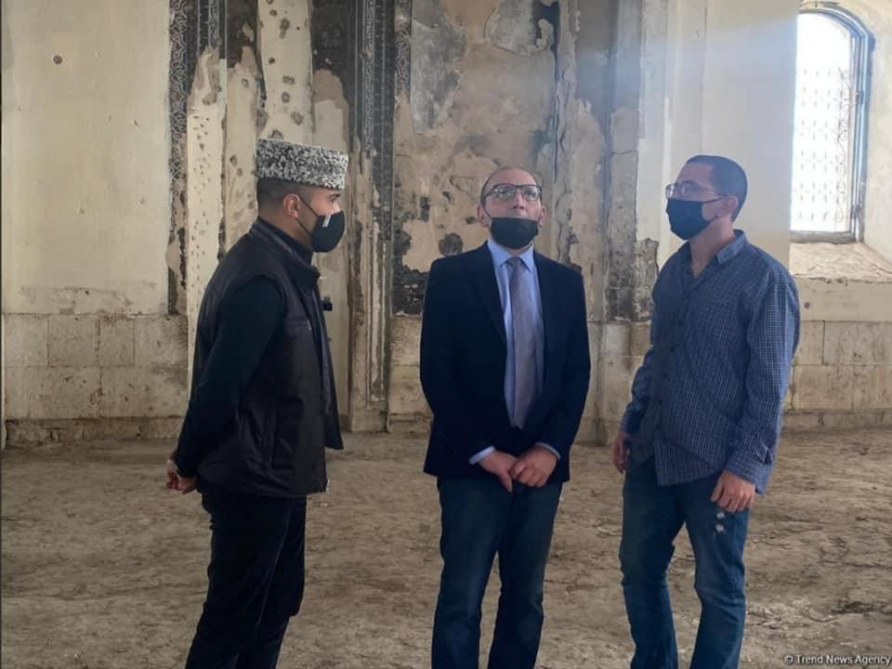 A group of Israeli journalists, who are visiting the territories of Azerbaijan liberated from the Armenian occupation, have witnessed the destroyed mosques by Armenians in the city of Aghdam, according to Azerbaijan in Focus, reporting AzerTac.

Israel Hayom newspaper correspondent Dean Shmuel Elmas and political columnist for The Jerusalem Post and The Jewish Press Arye Gut have familiarized themselves with the Juma Mosque in Aghdam and the mosque in Giyas village. They shared their views regarding the terrible consequences of the brutal treatment of Armenians against the Azerbaijani cultural and historical heritage.

The Israeli journalists have seen with their own eyes the acts of vandalism and neo-Nazism committed by Armenians in mosques, as well as in other destroyed areas.

Arye Gut said that the city of Aghdam had become a “ghost town” during 27 years of relentless Armenian occupation. “In the early 1990s, Armenia occupied Nagorno-Karabakh and carried out ethnic cleansing against the Azerbaijanis. More than one million Azerbaijani citizens were forced to flee their native lands. Nagorno-Karabakh and seven adjacent districts of Azerbaijan, which is 20 percent of Azerbaijan’s ancient lands, have been occupied, destroyed and plundered by Armenia,” he noted.

“Today, for the first time, I saw the place where the Armenians destroyed the Azerbaijanis 29 years ago, in Khojaly, near Aghdam. Together with my friend Shmuel, I have visited the cemetery where the victims of the Khojaly genocide were buried in the city of Aghdam,” Arye Gut mentioned.

“Armenian vandals destroyed and desecrated cemeteries, dismantled the graves of humiliated and insulted genocide victims, and removed their bodies hoping to find their gold teeth. These acts testify to Armenians’ hatred and anger that knows no limits.

As a result of Armenia’s planned policy of destruction, plundering and desecration of Azerbaijan’s cultural and religious heritage in the occupied territories, architectural monuments, cultural and historical monuments, mosques and rare manuscripts were destroyed and subjected to Armenian vandalism. The international community and international organizations cannot ignore this situation. The world must know this truth and we will definitely help Azerbaijan in this regard,” he added.