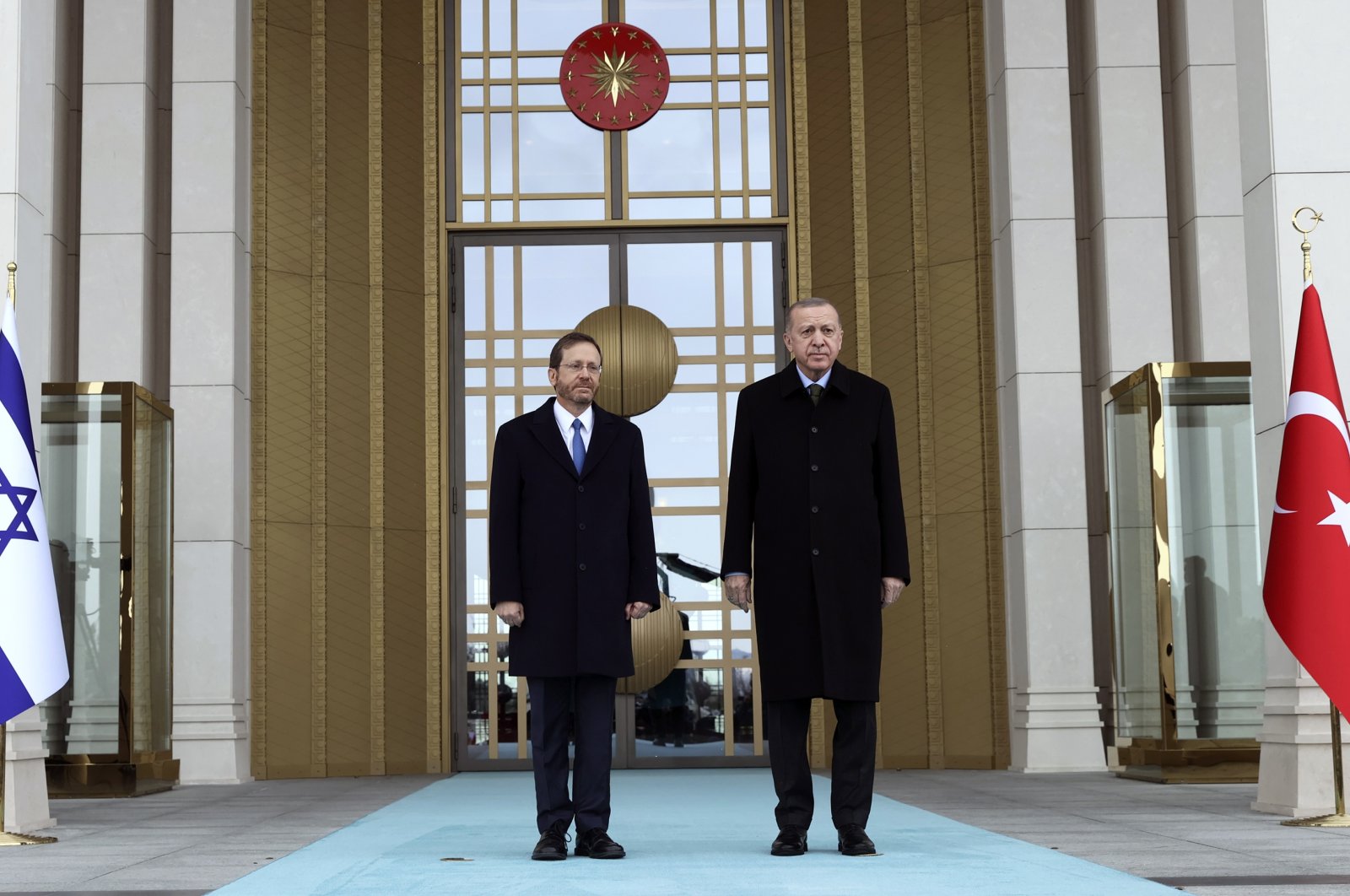 Israel’s President Isaac Herzog arrived in Turkey Wednesday to meet his counterpart President Recep Tayyip Erdoğan on the first visit by an Israeli head of state since 2007, as the countries seek to mend fractured ties, according to Azerbaijan in Focus, reporting Daily Sabah.

“President Herzog’s visit will be a turning point in Turkey-Israel relations,” Erdoğan said in a press conference following the meeting between the two leaders, adding that Turkey is ready to cooperate in energy.

The Israeli president’s visit is “an opportunity to develop our energy cooperation,” Erdoğan added.

Later on, Herzog also acknowledged the potential of Turkish-Israeli relations.

“Israel and Turkey can and should have a cooperation that can positively affect this entire region we call home,” he said.

“Relations with Turkey will be based on mutual respect from now on,” Herzog added.

“I highly appreciate the upcoming Antalya Diplomacy Forum which is set to bring a solution to the ongoing war in Ukraine,” he also said, referring to the Russian invasion.

“We will not agree on everything, and the relationship between Israel and Turkey has certainly known ups and downs and not-so-simple moments in recent years,” Herzog previously told reporters at Tel Aviv’s Ben Gurion airport ahead of his trip.

“But we shall try to restart our relations and build them in a measured and cautious manner, and with mutual respect between our states,” he said.

One particular area of interest for Turkey and Israel is natural gas. Erdoğan has said the visit will herald a “new era” and that the two countries could work together to carry Israeli natural gas to Europe, reviving an idea first discussed more than 20 years ago. Plans for a subsea pipeline from the Eastern Mediterranean to Europe, excluding Turkey, have stalled after the United States expressed misgivings in January.

Herzog’s visit to Ankara and Istanbul was in the making weeks before Russia invaded Ukraine, though the conflict could arise in talks since both Israel and Turkey have been playing mediation roles in recent days.

However, bilateral issues will likely dominate following more than a decade of diplomatic rupture between Israel and Turkey, a vocal supporter of the Palestinian cause.

Discussions on gas sales to Europe were also considered likely given the added urgency amid the Ukraine conflict.

Turkey and Israel will discuss steps to improve cooperation during talks between the two countries’ presidents in Ankara, the Turkish Presidency said on Saturday, as the regional rivals work to repair long-strained ties.

Erdoğan and Herzog will “review all aspects of Turkey-Israel bilateral ties” and “discuss steps that can be taken to improve cooperation,” it said.

The two presidents will also hold talks on “recent regional and international developments,” it added.

“The two presidents will discuss various bilateral issues, including Israel-Turkey relations and the potential for expanding collaboration between their respective states and peoples in various fields,” Herzog’s office also said.

In recent months, the two regional powers have sought a rapprochement after nearly a decade of broken ties.

Israel’s presidency is traditionally a ceremonial post but Herzog, a veteran of the left-wing Labor Party, has taken on a high-profile diplomatic role.

Erdoğan and Herzog have spoken several times since Herzog’s inauguration in July.

Israeli officials have said that Herzog and Erdoğan may discuss prospects of exporting Israeli gas to Europe through Turkey, a notion raised by Erdoğan in January, amid fears of impaired supply following Russia’s invasion of Ukraine.

Israel’s Prime Minister Naftali Bennett also stepped into the role as a Russia-Ukraine mediator over the weekend, meeting with Russian President Vladimir Putin at the Kremlin for three hours on Saturday, and speaking to Ukraine’s President Volodymyr Zelenskyy three times in a day.

Erdoğan is also in contact with Putin and Zelenskyy, while Turkish Foreign Minister Mevlüt Çavuşoğlu is set to host his Russian and Ukrainian counterparts in southern Turkey on Thursday.

Regional ties also remain sensitive, and Herzog visited both Greece and the Greek Cypriot administration ahead of his Turkey trip to reassure the two Israeli allies.

Herzog will also meet with members of the Jewish community in Istanbul before returning to Israel on Thursday.

Israel was a long-time regional ally of Turkey before a 2010 commando raid on a Gaza-bound aid flotilla left 10 Turkish activists dead.

In 1996 Israel and Turkey signed a “strategic partnership,” under which their air forces can train in each other’s air space. Relations took a downturn when Recep Tayyip Erdoğan, who was the prime minister at that time, walked out of the World Economic Forum in Davos in January 2009, in protest at Israel’s massive offensive in Gaza against Palestinians. The 22-day operation cost the lives of 1,440 Palestinians and 13 Israelis.

A full-blown crisis erupted in May 2010, when Israeli commandos staged a botched pre-dawn raid on the Mavi Marmara ship, part of a flotilla trying to ferry aid to the Gaza Strip in defiance of a naval blockade. Ankara recalled its ambassador and scaled-down economic and defense ties with Israel.

In March 2013, under pressure from U.S. President Barack Obama, Israeli Prime Minister Benjamin Netanyahu apologized to Turkey and announced compensation for the families of those killed.

Israel and Turkey formalized the normalization process in June 2016 after six years of estrangement.

In December 2017, Erdoğan led Muslim opposition to U.S. President Donald Trump’s plans to transfer the U.S. Embassy from Tel Aviv to Jerusalem and to recognize the disputed city as Israel’s capital.

On the day the new embassy was opened in Jerusalem, on May 14, 2018, Erdoğan accused Israel of “state terrorism” and “genocide” after dozens of Palestinians were killed by Israeli rockets.

Both countries recalled their ambassadors. Relations continued to sour, particularly after a controversial law passed by the Israeli parliament in July that defined the country as the nation-state of the Jewish people.

In November 2021, Erdoğan held telephone talks with Israeli President Herzog and Israeli Prime Minister Naftali Bennett, the first such discussions between the Turkish leader and an Israeli leader since 2013.

Erdoğan declared that Turkey is considering “gradual” reconciliation with Israel.

In January 2022, he announced that Turkey is ready to cooperate with Israel on a gas pipeline project in the Eastern Mediterranean.

The trio was part of the East Mediterranean Gas Forum established in 2019 with other states, including Egypt and Jordan – without Turkey.

In 2020, Israel, Greece, and the Greek Cypriot administration signed the EastMed deal for a pipeline to ship gas from the Eastern Mediterranean to Europe, triggering objections from Ankara.

The United States has since also raised concern about the project, citing possible issues over its “commercial viability.”

Erdoğan had earlier said energy cooperation could be on the agenda during talks with Herzog.

Turkey has recently been working to improve relations with several countries in the region as part of a normalization process launched in 2020.

Ankara, which supports a two-state solution to the Israeli-Palestinian conflict, has condemned Israel’s occupation of the West Bank and its policy toward Palestinians, while Israel has called on Turkey to drop support for the Palestinian group Hamas which runs Gaza.

Last month, Turkey said it would not abandon its commitment to Palestine in order to broker closer ties with Israel.

Through the years of animosity, Turkey and Israel have maintained trade, which stood at $6.7 billion in 2021, up from $5 billion in 2019 and 2020, according to official data.