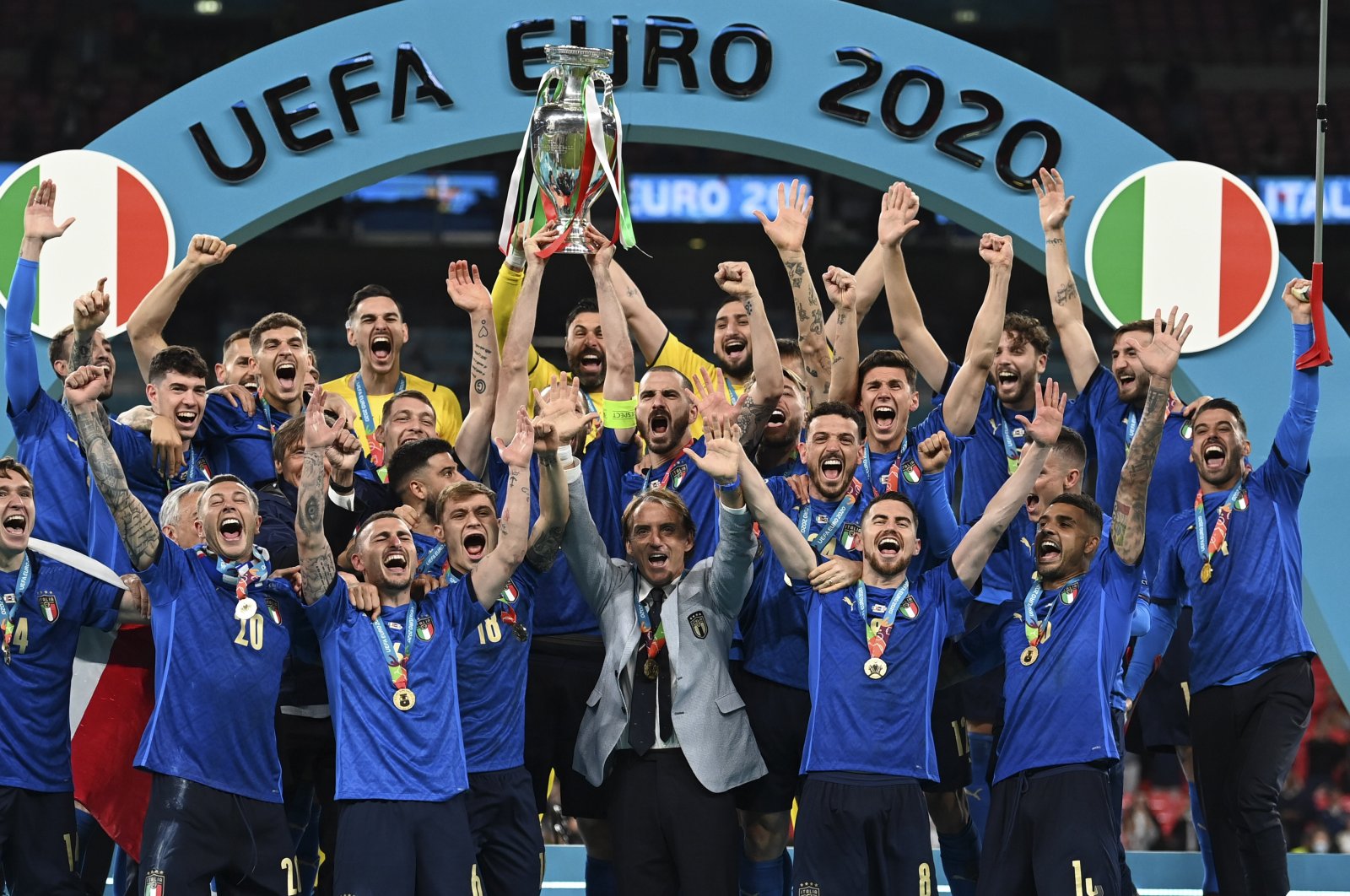 Italy team celebrates with the trophy after winning the Euro 2020 final against England at Wembley stadium in London, England, July 11, 2021. (AP Photo)

Italy clinched the Euro 2020 final after defeating England 3-2 on penalties on Sunday following a 1-1 draw at Wembley Stadium.

For England, it was utter dejection again – they know the feeling so well when it comes to penalties – after Gianluigi Donnarumma, Italy’s imposing goalkeeper, dived to his left and saved the decisive spot kick by 19-year-old Londoner Bukayo Saka, one of the youngest players in England’s squad.

Saka’s was England’s third straight failure from the penalty spot in the shootout, with Marcus Rashford and Jadon Sancho – players brought on late in extra time seemingly as specialist penalty-takers – also missing.

As Saka and Sancho cried, Donnarumma was mobbed by his teammates as they sprinted toward him from the halfway line at the end of the second penalty shootout in a European Championship final.

Then Italy’s jubilant players headed to the other end of the field and ran as one, diving to the ground in front of the Italian fans who have witnessed a rebirth of their national team.

It was less than four years ago that Italy plunged to the lowest moment of its football history by failing to qualify for the World Cup for the first time in six decades. Now, they are the best team in Europe and on a national-record 34-match unbeaten run under Roberto Mancini, their suave coach who has won an international trophy in his first attempt to add to the country’s other European title – in 1968 – and its four World Cups.

Mancini joined his players on the podium as Italy captain Giorgio Chiellini lifted the Henri Delaunay trophy to the backdrop of fireworks and tickertape. 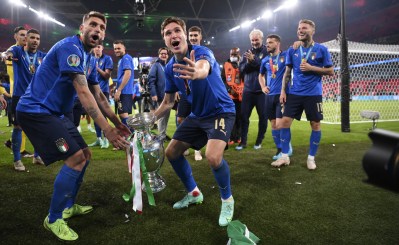 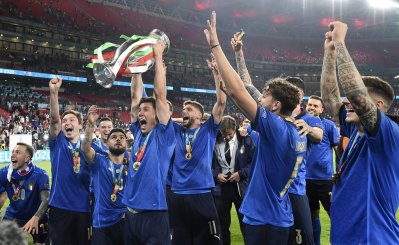 “It was impossible even to just consider this at one stage,” Mancini said, “but the guys were just amazing. I have no words for them.”

“The boys couldn’t have given more,” England captain Harry Kane said. “Penalties are the worst feeling in the world when you lose. It’s been a fantastic tournament – we should be proud, hold our heads up high. It’s going to hurt now, it’s going to hurt for a while.”

England’s first major final in 55 years had all started so well, too, with Luke Shaw scoring the fastest goal in a European Championship final by meeting a cross from opposite wing back Kieran Trippier with a half-volley that went in off the post in the second minute.

It was Shaw’s first goal for England and it prompted a fist-pump between David Beckham and Tom Cruise in the VIP box amid an explosion of joy around Wembley, which had at least 67,000 fans inside. Maybe more, given dozens of ticketless England fans managed to barge their way past stewards and police and into the stadium in unsettling scenes before kickoff. 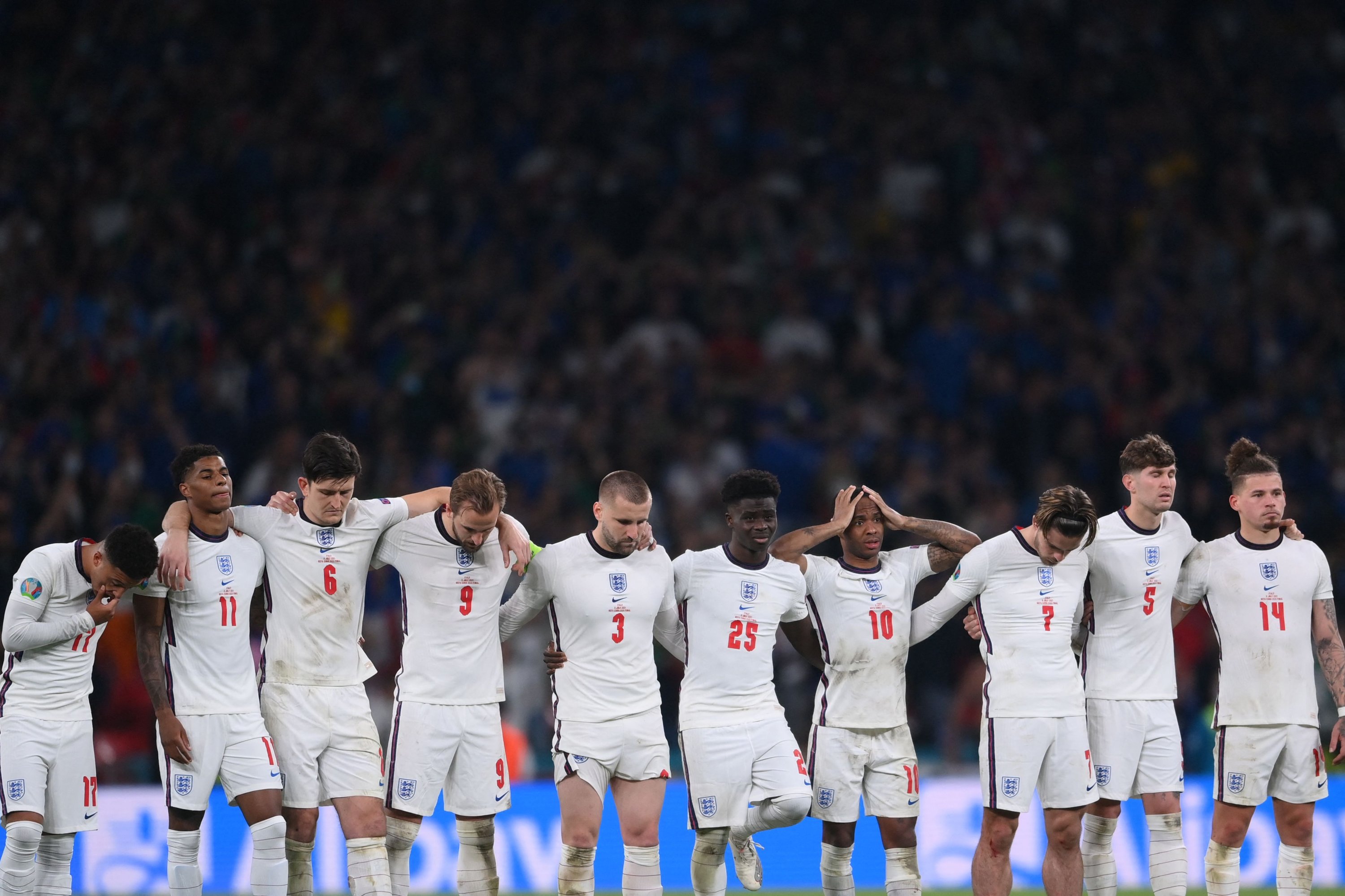 That was the only time Italy’s famously robust defense was really opened up in the entire 120 minutes.

Indeed, after Shaw’s goal, England barely saw the ball for the rest of the game.

Italy’s midfielders dominated possession, as widely predicted before the match, and England simply resorted to dropping deep and getting nine or even all 10 outfield players behind the ball. It was reminiscent of the 2018 World Cup semifinals, when England also scored early against Croatia then spent most of the game chasing its opponent’s midfield before losing in extra time.

Italy’s equalizer was merited and Bonucci was the unlikely scorer. He put the ball in from close range after a right-wing corner was flicked on to Marco Verratti, whose stooping header was tipped onto the post by goalkeeper Jordan Pickford.

England managed to hold on for extra time – the way three of the last six European finals went – and actually had the better of the final stages.

Just not the shootout, again.

After the misses of Rashford – he stuttered up to the ball and then hit the post – and Sancho, whose shot was saved by Donnarumma again down to his left, Jorginho had the chance to win it for Italy.

Incredibly, the midfielder who converted the decisive penalty in a shootout win over Spain in the semifinals also failed to score as Pickford tipped the effort off the post.

It was Donnarumma who then made the crucial saves and within minutes he had also been named player of the tournament, the first goalkeeper to be so honored.

So instead of coming home, the trophy is headed to Rome.

“We’d heard it day in, day out from Wednesday night – we heard it would be coming home to London,” Bonucci said. “I’m sorry for them, but the cup will be taking a nice flight, making its way to Rome so Italians all over the world can savor this.”

This article originally appeared in DAILY SABAH on 12 July 2021.