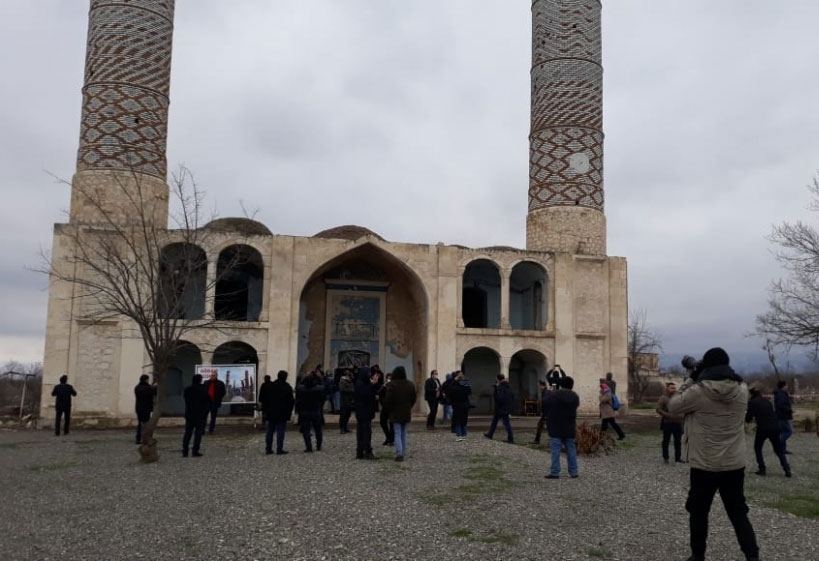 On March 13, the heads of media resources and NGOs, bloggers and public activists visited the Juma Mosque in Azerbaijan’s Aghdam region liberated from Armenian occupation, according to Azerbaijan in Focus, reporting Trend’s Karabakh bureau.

The participants of the trip were told about the history of the mosque and Armenian vandalism. It was emphasized that the Juma mosque was built in 1868-1870 by the Karbalai architect Safikhan Garabagi. The mosque belongs to the Karabakh architectural school.

During the occupation of Agdam, Armenian Armed Forces committed unprecedented acts of vandalism against the historical and cultural heritage of Azerbaijan. Monuments, cultural centers, mosques, cemeteries were destroyed and desecrated here.

The minarets of the Juma Mosque were destroyed from the inside, and the ceiling was demolished in some places. The inscriptions on it were also deliberately damaged.
This mosque is one of the monuments of republican significance.

Heads of media structures and NGOs, bloggers and public activists are accompanied by Assistant to the President of Azerbaijan – Head of the Foreign Policy Department of the Presidential Administration Hikmat Hajiyev.