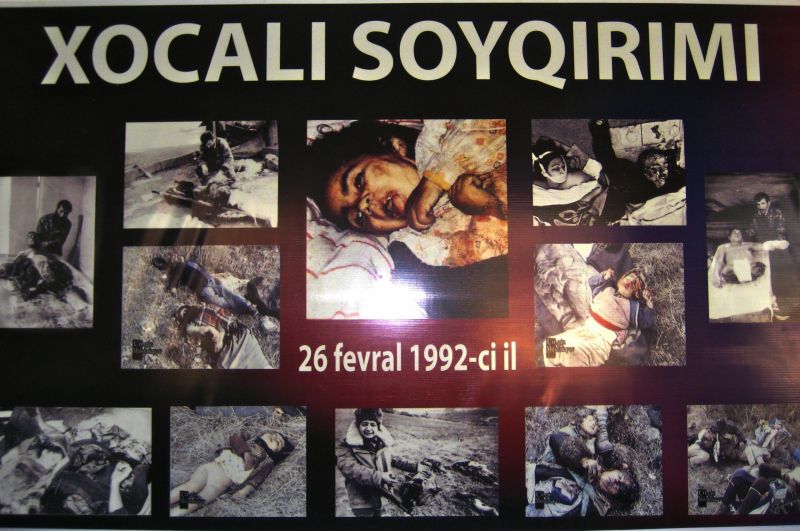 Khojaly: How The Lies Were Exposed Even Before It Emerged

On the night of February 25-26, 1992, Armenian armed formations carried out a massacre of the civilian population of the Azerbaijani city of Khojaly. This crime was the culmination of the policy of ethnic cleansing of Azerbaijanis carried out in the Armenian SSR and the Nagorno-Karabakh Autonomous Oblast of Azerbaijan SSR. On that terrible night, more than 600 civilians of the city were shot – among them, children, women and elderly people…

Only through the work of Azerbaijani and foreign journalists and human rights organisations – the international Human Rights Watch and the Russian “Memorial” – the crime could not be concealed and the world learned about it. It was a powerful blow to the national image that the global Armenian propaganda had been successfully forming in foreign public opinion for many years – “a small long-suffering Christian people, subjected to aggression and violence from wild hordes. Dressed in spotless white clothes, this nation, cultured and ancient, is bound to bear the cross of suffering.” The Armenian propagandists believed that the civilised world, imbued with this opinion, must certainly stand on the side of Armenia and defend it under any circumstances.

And suddenly such a terrible crime, which became publicly known, destroying this entire idyllic, but artificial construction.

This lie was absurd, if only because it contradicted independent investigations of the crime and those confessions that the Armenian leaders themselves made even before they decided to lie shamelessly.

The report, prepared on the basis of an independent investigation conducted at the very beginning of March 1992 in Khojaly by the most authoritative human rights organisation in the world, Human Rights Watch, stated that the responsibility for the terrible massacre of civilians lies with the Armenian armed formations and employees of the Russian 366th motorised rifle regiment. The documents prepared by the Human Rights Watch are used by international organisations and government bodies in Western countries.

The report of the Russian human rights organisation Memorial, which conducted its own independent investigation simultaneously with the Human Rights Watch, cites the position of the leaders of the Karabakh Armenians: “The NKR Supreme Council issued a statement in which it expressed regret about the cases of brutality during the seizure of Khojaly … In conversations with Memorial observers, officials did not deny that atrocities could have taken place during the capture of Khojaly, since among the members of the Armenian armed formations there were embittered people whose relatives were killed by Azerbaijanis, as well as persons with a criminal past.”

The report of Memorial, in particular, says: “Refugees walking along the “free corridor” in the territory adjacent to the Aghdam region of Azerbaijan were fired upon, as a result of which many people died. The surviving refugees scattered. The fleeing stumbled upon Armenian outposts and were subjected to shelling.”

Conclusions of the Memorial report: “During the military operation to seize the city of Khojaly, there was massive violence against the civilian population of this city. The massacre of civilians in the “free corridor” zone and adjacent territory cannot be justified by any circumstances. ”

In an interview with BBC correspondent Thomas de Waal, former President of Armenia S. Sargsyan, who then led the Armenian detachments, said: “Before Khojaly, the Azerbaijanis thought that they could joke with us, they thought that the Armenians were not able to raise a hand against the civilian population. We managed to break that stereotype. This is what happened.” Sargsyan not only stated the fact of mass destruction of the Azerbaijani civilian population, but also admitted that medieval barbarism was deliberate. Sargsyan inadvertently made this confession even before the official Armenian position on the Khojaly tragedy was formed.

Monte Melkonyan, a US citizen, one of the famous Armenian warlords, was killed in Karabakh. His brother and wife published a book of memoirs in the United States, based, in particular, on the testimonies of Melkonyan himself: “At about 11 o’clock in the morning, about two thousand armed Armenians came close to Khojaly from three sides on east … There, among the hills and already within the limits of visible safety, the soldiers of Nagorno-Karabakh overtook them. “They just fired, fired and fired,” refugee Raisha Aslanova told Human Rights Watch who was investigating. Then the Arabo militants pulled out their knives and began to strike with them …

“Monte arrived in Martuni only 22 days ago, but he was already walking along two death fields, drenched in the blood of prisoners and unarmed peaceful peasants … Monte walked, crunching over the deadwood, on which women and girls were scattered like dolls.” The second “field” mentioned by Melkonyan, where civilians and prisoners were shot, is the Azerbaijani village of Karadaghly: “Arabo and Aramo militants pushed 38 prisoners into a ditch on the outskirts of the village, including civilians, including women. One of the prisoners pulled out a grenade hidden in a bandaged hand and threw it at the feet of his guard Levon from the Patriotic Detachment. The explosion tore off part of his leg. The soldiers of Aramo and Arabo, eager to avenge the death of their comrade, who had died yesterday, began to shoot at the prisoners and finish them off with knives, all without exception. “Scar” Edo, one of five members of the Patriotic Squad from Ashtarak, doused several wounded soldiers with gasoline and threw a lit match. By the time Monte came to the ditch, there was only a heap of remains,” reads the memoirs. The book was published in the USA in 2005, and clearly contradicted the already established official Armenian position on the crimes committed by the Armenians during the First Karabakh War.

Thus, there is not only evidence of eyewitnesses, journalists and employees of human rights organisations, but also confessions of the crime by the criminals themselves – the leaders of the Armenian armed formations.

With the coming to power of the “Karabakh clan”, whose leaders were the organisers and performers of the mass destruction of people, the Armenian propaganda makes somersaults, and from the conditional admission of guilt passes to its complete denial and blaming the injured party – it was the Azerbaijanis themselves who allegedly shot the Khojaly people, so that they could discredit the “bright image of the Armenian people and their liberation movement.”

It seems that the initiators of this propaganda campaign were and continue to be in an inadequate state, if they assumed that one could so cynically and shamelessly contradict official documents and falsify obvious facts and evidence on the international arena. They took positions that cannot be substantiated with anything except lies and idle talk …

Armenian Foreign Minister A. Arzumanyan put himself in such a position when, in February 1997, he sent a letter to the Executive Director of the Human Rights Watch, Holly Cartner. He timed it to coincide with the fifth anniversary of the massacre. In the letter, Arzumanyan tried to refute the results of the report of the human rights organisation and blame the Azerbaijanis for the execution of the Khojaly residents.

“The reply to the letter of the Armenian government” (this is how the reply letter was titled) followed quickly, was laconic and frank. Executive Director Holly Cartner, in a completely non-diplomatic way, suggested to Aruzmanyan “not to repeat any more attempts to distort the content of our 1992 report.”

She reaffirmed the results of the independent investigation (March 1992) and again placed the entire blame for the massacre of civilians on the Armenian armed forces:

“We place direct responsibility for the civilian deaths with Karabakh Armenian forces. Indeed, neither our report nor that of Memorial includes any evidence to support the argument that Azerbaijani forces obstructed the flight of, or fired on Azeri civilians. We are deeply saddened and concerned that the Ministry (MFA of Armenia – Ed.), deliberately or unconsciously, linked our report with the views that we reject and which our report does not reflect.”

“We invite governmental and intergovernmental organisations to use our report and sincerely hope that there will be no more attempts to misrepresent the contents of our 1992 report.”

Of course, all this is not known in Armenia. And they don’t even want to know. Identical thinking requires one to fully believe even in the complete absurd that propaganda imposes on society.

The organisers of the massacre R. Kocharian and S. Sargsyan were presidents, and S. Ohanyan was the Minister of Defence of Armenia. And its rank-and-file murderers are considered heroic liberators. A monument was erected to them in Khankendi.

When justice is finally done, all evidence of crimes will be presented to the criminals sitting on the bench of the international court.

This article originally appeared in Turan News on 24 Feb 2021.